IN CONVERSATION WITH: Pulled Apart By Horses 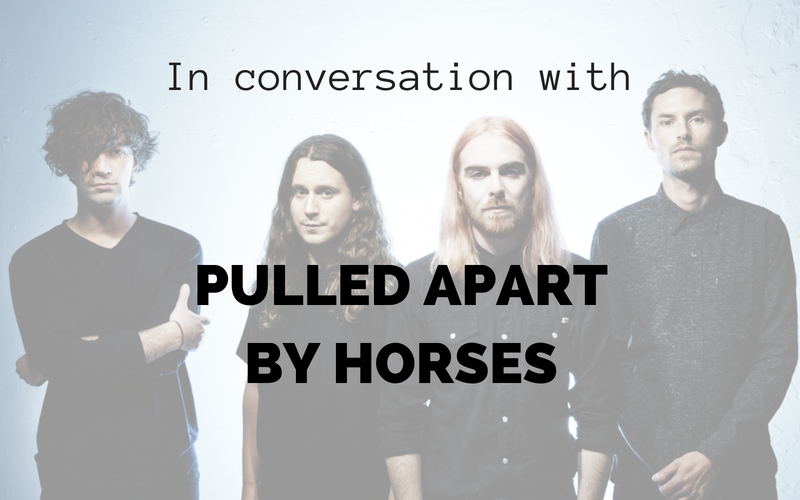 Ahead of their centrepiece show at Live At Leeds 2018, we caught up with James Brown, lead guitarist of locally based post-hardcore icons Pulled Apart By Horses. Refreshed after a break from touring their most recent fourth album The Haze throughout 2017, we discussed new material, live performances and classic album inspirations.

The Student Playlist: How much new music have you written?

It’s only been like five or six months then, that’s mad you’ve done it so quick.

That’s the thing. Sometimes it doesn’t happen. Like the third album [2014’s Blood], it was really difficult, we had to take a bit of time out because it wasn’t there, you can’t force it. But then this time, it’s weird, it’s kinda like farting songs. It’s really weird and it’s cool, because you do worry. I remember Tom worrying a bit when we did Blood and it’s like shit, what’s gonna happen? Some songs got written in the studio and stuff, which is cool,but this time it’s just coming out left right and centre at the moment. So it’s like if its there, we might as well.

Yeah it would almost be unnatural not to.

Yeah, it would be silly to wait around if you have the stuff, why wait?

If it’s there and it’s amazing, and its good and we love it we’ll just put it out this year. I think with social media and streaming people just want stuff now, they want it there and then and people get bored really quickly now. I don’t think people cherish albums, it’s all about singles. I think people just want songs and if you put out an album you’ve put out all your songs. So like when we put The Haze out last year, that’s all our songs out, instead you could just not put an album out and put a song out every month, and that’s something we have thought about doing.

I guess that’s one of the great things about vinyl, because as more people get back into vinyl, they’re more into albums.

That’s it! Yeah. We love vinyl so much it would be sad; I mean I don’t think the album will die, because sometimes people go like ‘oh the album’s gonna die’. It’s like we still love the idea of vinyl, because the art is really important to use, all the imagery and stuff like that.

Yeah, on The Haze the artwork was so nice.

Yeah, it’s important and you don’t get that, you want to be able to hold that in your hands and then get the green vinyl out, which looks disgusting, but its cool and that’s part of the whole thing.

That’s why it was so nice going to the Headrow House thing, you guys did for the launch of The Haze, going to the gig, it becomes such a strong memory.

Exactly, that’s why we did that, saying ‘hi’. That’s just part of the whole process for us. That’s what it’s all about, it’s about having it as a product and being able and be able to speak to and see the people. Not just like hiding away, ‘oh you can hear our songs on the internet’, we’re just gonna hide in a dressing room or whatever.

Yeah and I feel like bands are starting to do that more, but it was the first of one of them that I’d been to.

We kinda took that page from The Cribs, because they started doing it quite a lot over the past three albums they’ve done and we thought that’s cool we should do that. People appreciate it and we get to speak to people that like to buy our music and say thanks.

Yeah, because I think its sad, but that sort of community of music is going a little bit.

I feel like when you’re young you think of bands and artists as not even real people, then you grow up and you realise your friends are in bands, you can just talk to anyone.

Yeah that’s how it should be. And I hate the whole shit where bands do ‘meet and greets’. I think that’s really shitty of bands to do that, if you give us £150 each when you buy your ticket online and you can meet them at 6pm and watch half an hour of sound-check, I mean come on man you’re taking the piss a bit there. Open the doors and the first 50 people at turn up at 6 o’clock come in. Don’t charge them £150 to come into your sound-check that you’re gonna be doing anyway. It’s bullshit, that. They’re profiteering off their fans, like its fine to profiteer if they buy your albums.

Exactly! That’s what I love about Leeds. It’s got such a good scene and everyone I’ve seen has been so friendly.

Yeah, everyone hangs about and stuff, everyone goes out on the weekend not just hiding in some fancy fucking bar, everyone just goes to Chunk and the Brudenell, it’s really open.

That’s one of the things about Live At Leeds, the Brudenell and Hyde Park Book Club seem so far away when you’re in the city centre!

That’s the only problem! I’ve had years where I’ve been to Live At Leeds and I’ve spent one year just in Hyde Park then another year just been in town because it is a bit of trek. Then if you want to come back because you want to see us it’s like ‘oh fucking hell’. But now we’ve got Uber! Uber must make a fortune out of Live At Leeds, carting people around all night and all day.

So are you guys gonna have enough energy for tonight? Does it just come to you when you’re live?

I think it happens every gig doesn’t it? It must be the same for everybody where you come off and you play and hour and its pretty intense and its just adrenaline, it’s a drug, you could pick up a car. Genuinely, some days I think I could just go outside and pick up a Mini and just throw it into the sky over a mountain. It’s just when it stops that it’s bad. We’re going to do the DJ set [at the official after-party] and that’ll be loads of fun and then at 2am, you’ll just be like shut down, I’ve got to go, can’t fucking do anything. I had that last night in the van, everyone was drinking in the van and it was like 3am and it just hits you and you go ‘oh, I’m going to sleep, I can’t do this anymore, I’m gonna cry if I carry on drinking’!

Is there one particular album that has influenced Pulled Apart By Horses, or something you listen to constantly?

I think one of the big ones for us was In Utero, by Nirvana. Nevermind is amazing, but I think they hit the nail on the head at that point. I think they became a lot more creative in their writing, and with the lyrics I think Kurt [Cobain] had hit this new high, a really inspiring record lyrically and musically. We all love that record, it’s incredible.

You guys have such a mix of sounds anyway, but you can really hear that little tinge of grunge-iness.

It’s definitely there, I’d say more so on the second album. That was the thing about the time, they were calling it ‘new grunge in Leeds’ and then Dinosaur Pile-Up, ‘grunge, grunge, grunge’. We were like, we don’t wanna be that. Nirvana even said they didn’t like the term. It’s not a very nice word actually when you think about it, ‘grunge’.

I think as well with us we will to try to do each album… it’s always Pulled Apart By Horses but we like to change it a little bit. The last album we would say was kinda like a garage-rock-style album, and then this next one we keep talking about Iggy Pop. I think it’ll be a bit more rock ‘n’ roll, old school ‘70s sounding.

Yeah, Stooges style! Maybe just have one guitar, bass drums and just Tom singing and just strip it back, just let him do his thing without his guitar. Just strip it back a little bit and do things differently because otherwise it’s boring for us. Sometime people are like ‘ahhh, I love your first album’ and it’s like yeah if we wrote another four of them we would be bored out of our minds. It’s not fair on us!

I do think with you guys, even if it sounds different, you still have that energy that you are so known for, especially live.

Yeah, I think we just enjoy the music we write. The music we write, the stuff we listen to, that influences us is part of the whole writing process so we enjoy playing those songs. It’s not like, if we were a folk band, we’d not necessarily enjoy it as much as we enjoy doing this on stage – not that we don’t love folk music! It’s just part of us, it’s what we love so why aren’t we going to throw ourselves into it when we play it live.

And I feel like you can’t be doing the same thing every time because you can’t just like one genre of music for your whole life, you’re gonna have so many sounds influencing you all the time.

Yeah, absolutely yeah. But I think this year is gonna be cool because we know we’ve got a bit of time to enjoy writing. We haven’t got a gap or a window where someone’s saying to us ‘you have to write’ or ‘you need to get the new album written’ because its only been a year since The Haze came out, so in a year from now maybe a label might be going ‘erm, where’s you new album?’ We’re already writing now so there’s no pressure and that’s why it would be cool to do a rock ‘n’ roll album because it gives us time to do it and find a cool retro sound.

We’re all kinda feeling that idea, it would be cool to do live and get really carried away with it. I know Tom’s always liked the idea of having a bit more freedom to run around with the mic and stuff because we don’t know what would happen if he did that and it would be interesting to see what happens! He might turn into an absolute prick though!