“The House of the Jazz, of the Funk, of the Rhythm” – A Beginner’s Guide to A Tribe Called Quest 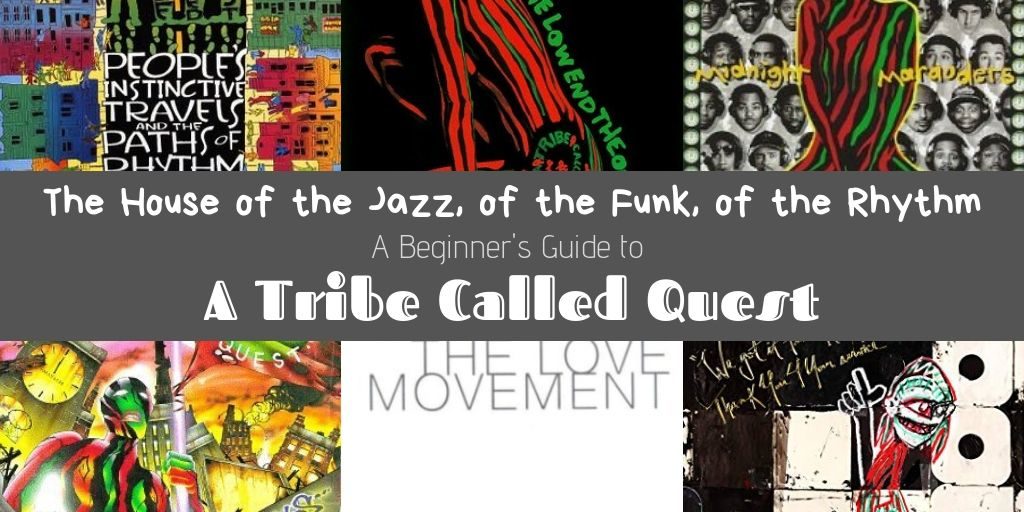 Lennon and McCartney; Morrissey and Marr; the Gallagher brothers. Some of the most iconic pop music ever made has been predicated by immense partnerships. Looking back at A Tribe Called Quest’s body of work, it’s clear that MCs Q-Tip and Phife Dawg undoubtedly deserve their place within that pantheon. Along with DJ/producer Ali Shaheed Muhammad and MC Jarobi White (who only lent his voice for their first and last albums), they spearheaded a revolution of forward-thinking, intellectual hip-hop during the Nineties, and cultivated an influence that has gripped generations of rappers and producers since. OutKast’s experimental playfulness; Kendrick Lamar’s compelling lyricism; Madlib’s sample-heavy beats. None of this would’ve arguably been possible if it weren’t for A Tribe Called Quest.

Q-Tip (Kabaal Ibn John Fareed) and Phife (Malik Izaak Taylor) had already forged a relationship before Tribe’s formation, having grown up together in Queens, New York. Q-Tip performed as MC Love Child, and recruited Muhammad as his part-time DJ. Phife, or Crush Connection as he was formerly known, frequently collaborated with the duo, and eventually joined the group on a permanent basis once Jarobi became a member. The group’s name spawned from Q-Tip’s appearance on the Jungle Brothers’ 1988 track ‘The Promo’, on which he spits about coming “from A Tribe Called Quest”. Although he had never featured on a record prior to ‘The Promo’, Q-Tip’s verse was as confident an introduction as you’re ever likely to hear, and came at a time when the hip-hop landscape was beginning to evolve once more.

Hip-hop transformed into a musical and cultural tour-de-force during the 1980s. It wasn’t confined to house parties anymore; it had spread beyond the Bronx where it originated and was drawing in audiences on a much wider scale than ever before. It also became more stylistically diverse. Run-D.M.C., decked out in their Adidas shoes, gold chains and fedoras, took the fashion of the streets to the mainstream, and pulled hip-hop away from its funk and disco roots with their hard-hitting beats and efficacious rapping. Public Enemy were using their voices to hold the powers that be accountable over a furious collage of noise, while N.W.A. drew from their own experiences of racism and police brutality, riling up white, suburban middle-class America in the process.

A Tribe Called Quest, as well as the Jungle Brothers, De La Soul and the rest of the Native Tongues collective that they were each a part of, represented another sea change as the decade drew to a close. The group didn’t last long, but their eclectic palette of sounds were no less era-defining. Embracing their youthful positivity and wearing their Afrocentrism on their sleeves, the Native Tongues balanced socially-aware lyrics with colourful, sample-laden instrumentals that incorporated segments from jazz, soul and funk songs. Each member carved their own niche, but it was Tribe who left the most enduring legacy, and enjoyed the most commercial success to boot. Driven by Q-Tip’s ambition, they pioneered jazz-rap during a classic three-album run (1990’s People’s Instinctive Travels And The Paths Of Rhythm, 1991’s The Low End Theory, and 1993’s Midnight Marauders), with Tip and Phife forming an unparalleled chemistry on the mic. Whether they were light-heartedly bragging about their rapping proficiency, expanding your mind with some thought-provoking commentary, or simply setting out to make you dance and have fun, A Tribe Called Quest had you covered.

Cracks within the group started to surface around the release of their fourth album Beats, Rhymes And Life. By 1996, Tribe’s dynamic had drastically changed. Q-Tip, who was now working with other artists more freely, had converted to Islam, which greatly affected his relationship with his partner in rhyme. Phife meanwhile had moved from New York to Atlanta, with the making of Midnight Marauders and the rigours of touring physically draining him. Tip and Phife’s personalities had always contrasted – the former an ambitious perfectionist (occasionally to his detriment), the latter equally skilled but sometimes stubborn and difficult to work with – but the distance between the pair had grown. The internal difficulties contributed with their artistic decline, and by 1998, A Tribe Called Quest announced that they would be no more, a month before The Love Movement was set for release.

Each member of A Tribe Called Quest embarked on new projects thereafter. Q-Tip (unsurprisingly) fared the greatest after Tribe’s break-up; each of his three solo records received critical acclaim, and his collaboration with The Chemical Brothers (‘Galvanise’) earned him his first Grammy Award in 2006. Phife released his first and only solo album Ventilation: Da LP in 2000, on which he didn’t hesitate to hide his resentment towards Tip as well as Tribe’s label Jive Records. Rapping with a rediscovered intensity, he blasted Tip for his increasingly commercial music, and accused Jive of neglecting and tearing Tribe apart. Then there was Muhammad, who emphasised his production credentials as one-third of Lucy Pearl, an R&B group that also consisted of Tony! Toni! Toné!’s Raphael Saadiq and En Vogue’s Dawn Robinson. Unfortunately, the group only had one album to their name, and split up after just three years together.

Tribe reformed in 2006 and played several high-profile live shows, but a new album seemed like a distant possibility. Nine years later, they were back in the studio, reinvigorated after performing on ‘The Tonight Show Starring Jimmy Fallon’. But just four months into recording, tragedy struck. Phife sadly succumbed to the diabetes he’d been suffering with since he was 19 – a loss that deeply shocked and saddened the hip-hop world. Now without one of his closest friends, Q-Tip was left to complete the album, aided by collaborators both old and new. We Got It From Here… Thank You 4 Your Service was finally unveiled to the world on 11th November 2016, with Q-Tip announcing it was to be Tribe’s last album. Having parted ways under bitter circumstances the first time around, it was thankfully the swansong they so richly deserved.

Funny, political, and lovingly drenched in nostalgia, We Got It From Here… reaffirmed everything that made A Tribe Called Quest such legendary bastions of hip-hop. Despite their affinity for the past, it also showed just how good they were at freshening up their sound, a quality which lent itself to one of the most timeless back catalogues ever assembled in hip-hop.

Speaking of that timeless back catalogue, feel free to check out our Spotify playlist below, and have a read of our journey through each of A Tribe Called Quest’s six albums on the next page!