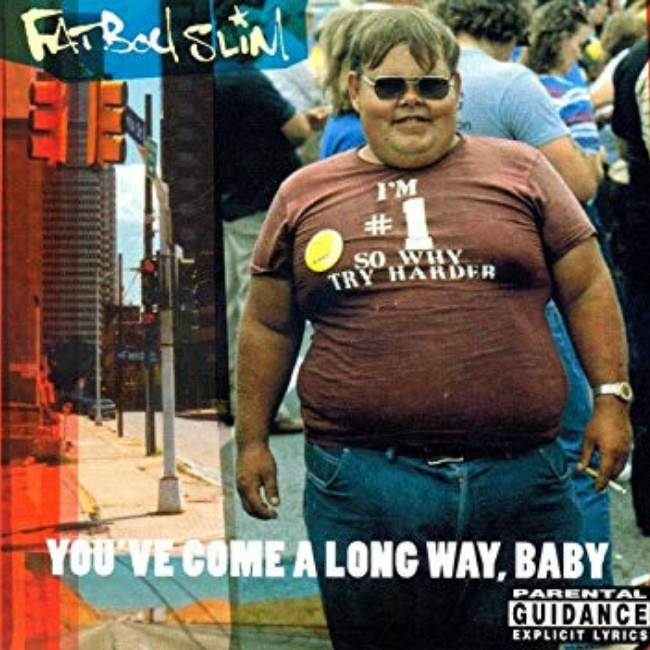 Having lived too sheltered a childhood to partake in the Oasis-led guitar revival of the mid-Nineties, in a slightly eventless middle-class enclave of Norwich growing up primarily with GameBoys instead of Discmen, the first proper pop-culture moment that I can remember was the huge success of You’ve Come A Long Way Baby, the second studio album by Fatboy Slim. Just on the cusp of my teens and moving to secondary school, the ubiquity of the album and its run of four consecutive massive hit singles was the backdrop to my wider discovery of pop music, the opposing worlds of the charts and the underground. It was the first album I saved up to buy with my own money, and the first pop cultural artefact that absolutely everybody at school had.

By the mid-Nineties, off the back of his success as a member of The Housemartins (the band that spawned The Beautiful South), Norman Cook was an important figure in British underground and chart music, but who was absolutely not a celebrity. He had been the brains behind smash hits by the likes of Freak Power and Beats International, and was a resident DJ at the popular Big Beat Boutique in Brighton. The success of those club nights had spawned the Skint Records label, and Cook was then responsible for one of the imprint’s earliest successes with his debut Fatboy Slim album Better Living Through Chemistry in 1996. Label boss Damian Harris presently asked Cook to make an album that sounded like the music he played at post-Boutique after-parties – as Harris put it, “hip-hop at the wrong speed”.

READ MORE: The Chemical Brothers // ‘Dig Your Own Hole’ at 20 years old

One breakthrough that had signified the future for Fatboy Slim had been Cook’s totally wired remix of Wildchild’s ‘Renegade Master’ in 1997, which transformed the old-skool leanings of the original into something distinctively ‘big beat’, bringing the breakbeats and crazy vocal modulations typical of the sub-genre into the mainstream for the first time. He had done the same to Cornershop’s ‘Brimful Of Asha’, sending it to number one in the UK in remixed form at the start of 1998.

The Fatboy Slim guise seemed to be the vehicle that most suited Cook, though – one which gave him the freedom of his extensive and eclectic record collection. Recorded entirely on a beaten-up Atari ST computer, with just Creator software and a mass of floppy disks, You’ve Come A Long Way Baby seemed to entirely sum up Cook’s carefree, fun and DIY approach to music. It also allowed his personality to shine through in a way that Better Living Through Chemistry hadn’t, for all its hard-hitting consistency.

It’s Cook’s brilliant eye for sampling, picking sonic material that could be both humorous and poignant, that makes You’ve Come A Long Way Baby such a compelling and refreshing listen. Vocal snippets looped and swooped around cut-up portions of old, obscure records from hip-hop, soul, gospel, funk, surf-pop and rock to create a fun, slightly scruffier and more accessible variant on the techno of the likes of Underworld and Orbital from earlier in the decade, and one which could appeal to the rock and pop mainstream. Thereby, Cook had hit upon an album with universal attraction, one which would appear in record collections alongside Oasis or Madonna and still make sense.

Strangely, for a record compiled in end-of-the-century Brighton, You’ve Come A Long Way Baby evokes a timeless and distinctly American sense of cool. Everything you need to know about the album is referenced in its packaging. The image on the back of the CD cover is of a lonely American desert highway stretching into the horizon; the vast musical galaxy from which the album is stitched together is seen in the stacks upon stacks of dusty vinyl on the inside cover; and of course, the front cover image of the obese, carefree young man taken at the 1983 Fat People’s Festival in Danville, Virginia – whose identity has never been revealed, despite lots of enquiries.

The American fixations are immediately apparent in ‘The Rockafeller Skank’, the album’s lead single released at the height of the World Cup summer of 1998, was nothing short of the most memorable pop song of that year. Based on a Northern Soul guitar sample (Just Brothers’ ‘Sliced Tomatoes’) and a chopped-up B-boy vocal, with a slowed-down and sped-up beat bridge in the middle, it’s a party-starter that stands for raw, undistilled fun even two decades later. It reached no.6, but each of its three subsequent singles registered a higher position in the UK Singles Chart over the next 12 months, marking the start of the success of its parent album. The deliriously loose, wrong-speed hip-hop of ‘Gangster Trippin’ took Fatboy Slim into the Top Three as You’ve Come A Long Way Baby entered the British Albums Chart at no.2 in late October, but it would be the following single that took it to the summit and then into the stratosphere.

Released in early January 1999, the bewitching ‘Praise You’ became Fatboy Slim’s signature song when it hit no.1, coupled with a superb award-winning budget video by Spike Jonze. Based around an a-cappella sample of Camille Yarbrough’s spiritual anthem ‘Take Yo’ Praise’ and set to a soulful, uplifting and beautifully simple piano figure, it became a gold-selling single in its own right, selling 400,000 copies. Around the same time You’ve Come A Long Way Baby took off properly, staying near the top of the British charts for most of the rest of 1999, vastly exceeding even the most optimistic projections for it.

One more single was released for good measure, with the transcendental, sweeping sense of occasion of ‘Right Here, Right Now’ hitting no.2 in April 1999. In its context as You’ve Come A Long Way Baby’s album opener, it’s a low-key house classic that soars and glides in its intensity before its beat drops. The magic comes with its repeated chant, that makes it seem like a mass exhortation to bliss, propaganda rather than mere pop. The spoken word segue that links it to ‘The Rockafeller Skank’ is still enjoyably silly!

But You’ve Come A Long Way Baby doesn’t begin and end with its four smash singles. The rest of the album is populated with maddeningly infectious juxtapositions of genres. ‘Soul Surfing’ is a hedonistic party starter; ‘Love Island’ is a rubbery house banger; while ‘Kalifornia’ and ‘You’re Not From Brighton’ strut and peacock with a sense of purpose. The delightfully gratuitous obscenity of ‘Fucking In Heaven’ gave the album a frisson of transgression for us as 12 year old fans at school. Again, while this wasn’t strictly groundbreaking in originality terms (DJ Shadow had already done all this on the massively influential …..Endtroducing in 1996), that’s really not the point – it’s the structuring, and the forcefulness of its execution, that’s so revelatory here.

For all the American influences, there’s a distinctly British touch and sensibility to proceedings as well, particularly in its underlying humour. The psychedelic horns that help close out ‘Praise You’ display a latent Sixties, Summer-Of-Love lookout; ‘Build It Up – Tear It Down’ recalls the daftness of early ‘70s glam rock; even non-album B-side ‘Sho Nuff’ is built entirely around a British television show jingle. Regarding the aforementioned ‘Fucking In Heaven’, with the Freddy Fresh sample repeating the ‘f’ word no fewer than 108 times, only a British artist would get any kind of kick with that sort of deliberate overkill.

Going on to sell over 1.2 million copies in Cook’s native Britain, with a quadruple platinum status achieved within two years, and a further million in the United States and over three million globally, You’ve Come A Long Way Baby introduced the public at large to a man who had previously acted behind the curtain of pop for over a decade before. Cook’s next Fatboy Slim album, 2000’s Halfway Between The Gutter And The Stars, was one of the most anticipated releases of the new millennium. While it spawned a similar number of great singles and went platinum quickly, it sold only a quarter of its predecessor’s huge figures. 2004’s often lazy Palookaville was Cook’s last full-length album release as Fatboy Slim, and he’s since dealt in occasional stand-alone singles in collaborations with others – 2013’s ‘Eat, Sleep, Rave, Repeat’ returned him to the Top Ten for the first time in over a dozen years, for instance.

Bridging the gap between booze and ecstasy culture at the end of the Nineties, You’ve Come A Long Way Baby remains the quintessential Fatboy Slim artefact and Norman Cook’s finest hour, the kind of once-in-a-lifetime record its creator can dine out on forever.

Listen to You’ve Come A Long Way, Baby by Fatboy Slim here via Spotify, and tell us what you think below!