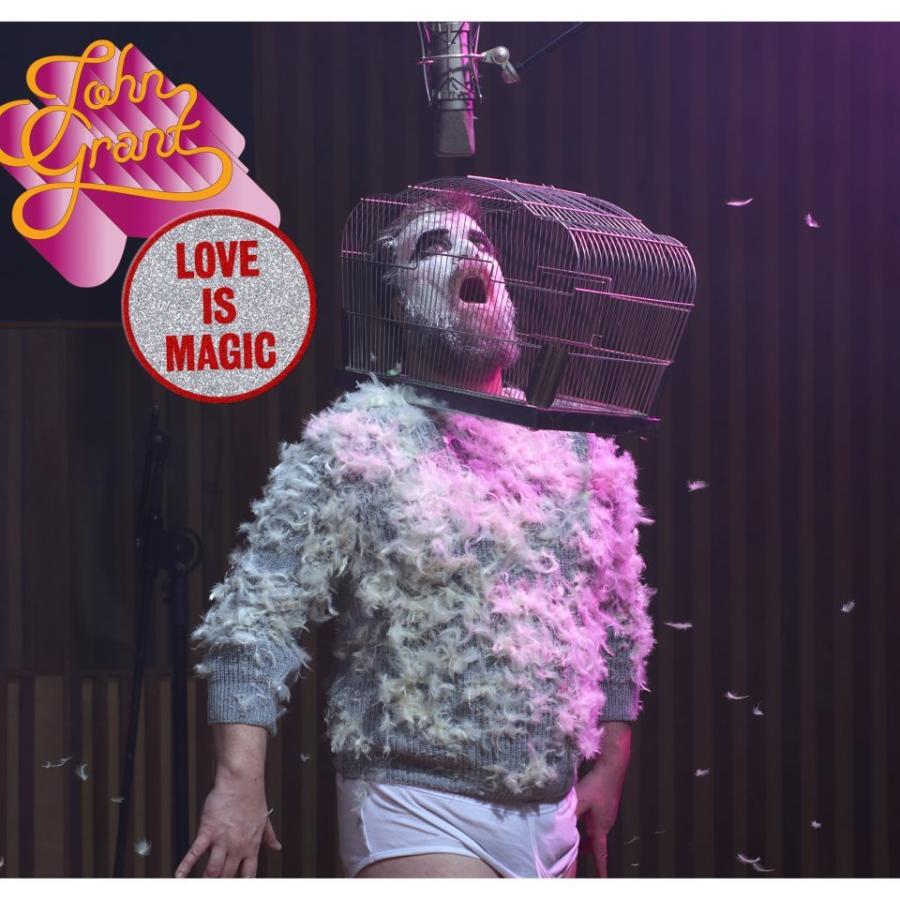 John Grant’s fourth album ‘Love Is Magic’ is an Eighties pop extravaganza that crystallizes the absurdity and vulnerability of romantic and sexual experiences.

On his fourth album Love Is Magic, John Grant is skilfully and willingly going down the mad rabbit hole of love and relationships yet again, resulting in an Eighties pop extravaganza that crystallizes the absurdity and vulnerability of romantic and sexual experiences. The smoky-voiced veteran of witty self-awareness in music form that has released such all-around brilliant, sharp like a glass shard in its lyrics albums like Pale Green Ghosts has come back. Love Is Magic is essentially about all the peculiar ways people crave, attract, idealize and fuck up love while mending it all at the same time on top of ridiculous amounts of groove and swagger that make fun of themselves as well as being completely necessary. The result is, by some way, the poppiest Grant release yet.

The album opener ‘Metamorphosis’ reads as a sonic representation of how our brains deal (or fail to deal) with grief amidst the never-ending distractions of media while unleashing overwhelming amounts of synth upon one’s ear. Behind all the layers of absurdity (“14 year old boy rapes 80 year old man / Tickets to the Met / Sweetcorn from the can / Baby’s in the whitest house / Playing with his toys / Earthquakes, forest fires, hot Brazilian boys”), the sea green sadness floats: “As I enjoy distraction / She just slipped away / It didn’t seem to matter / How much she had prayed”. The song shifts gears into melancholic confrontation with death, just to spring into insanity again. ‘Metamorphosis’ sets the tone for the album as upbeat yet downright cruel at times when all the glitz and glam of production fizzles away and the listener is hit with the bare honesty of Grant’s lyrics.

Title track ‘Love Is Magic’ takes it down a notch regarding the intensity of sound, though pokes fun at the absurd and obsessive way humans overthink and romanticize love. “Love is magic / Whether you like it or not / It isn’t so tragic / It’s just a lie that you bought / When the door opens up for you / Don’t resist, just walk on through / There is nothing left to lose” – confidently and surprisingly hopefully sings Grant over a mid-tempo synth beat.

On ‘Tempest’, the mood darkens yet keeps a dreamy quality as it yearns for companionship. The shimmering escapism track, about getting lost in video games and wallowing in loneliness, pulls from Grant’s own experiences of growing up in socially conservative Michigan and Colorado. The sense of anxiety on ‘Tempest’ is turned up by including samples of shooting sounds pulled from ‘80s video games.

That being said, ‘Preppy Boy’ oozes confident sexuality and pines over the typical Ivy-League boss figure of a man – ridiculously attractive but obviously unavailable. It gloats with exuberant synth madness and establishes the second mood pillar of Love Is Magic. The album’s moods dip between sly sexy or menacing, almost threatening and ‘Smug Cunt’ is probably the high point of the latter. It’s a no-nonsense commentary on current USA politics and its leaders, where John Grant’s lyrics and mise en scène are still as razor sharp as on his most recognisable songs like ‘GMF’ and ‘It Doesn’t Matter To Him’.

‘He’s Got His Mother’s Hips’ is another sexy, over-confident strut of a song in disco fashion, making fun of “a cheeseball doing all he can to get into a woman’s pants, making a total ass of himself” (source), as well as being infectiously catchy and defending its position as one of the most prominent tracks of the record. Now, if ‘Love Is Magic’ is idealistically realistic, ‘Diet Gum’ is a totally ironic take on relationships. Here, Grant doesn’t take himself too seriously. He half robotically sings about the manipulative tendencies of couples, half launches into a demeaning rant about the lover’s stupidity and pretentiousness in a camp manner. It’s both “You know, being with you was like a cross between Cannibal Apocalypse and Lassie 9, except nowhere near as both of those movies were/ It’s still a personal conundrum of mine, how anyone can have such few of self-awareness” and “Hey, um, I’m sorry I snapped at you a few minutes ago/ It’s nothing personal, I hope you know that”. Such high-class mockery of the everyday and the human while being painfully self-aware makes even a considerably musically repetitive track like ‘Diet Gum’ an entertaining listen.

Still, Love Is Magic houses a couple of the classic ‘John Grant ballads’ we all know and love. The closing tracks marvel and accept the innocence and blindness of one perceiving their lover. ‘Is He Strange’ sings about the peculiarities of the people we suddenly, almost accidentally fall for, and ‘The Common Snipe’ –  a song about birds and their mating rituals – is “about truly seeing another human being and not projecting onto them what you want them to be” says Grant in a Bella Union feature. The album closes with ‘Touch And Go’, addressing and empathising with Chelsea Manning whose suicide attempt had echoed in the media on the lyrical, probably least over-the-top track, adorned with harmonizing back vocals. Here, Love Is Magic culminates in a climbing piano scale before a robotic voice recites some cryptic numbers.

From the madness of ‘Metamorphosis’ to the calm, compassionate ‘Touch And Go’, John Grant can be seen to hone and sharpen his lyrical skill with intense vigour yet again, arriving at maybe the most condensed and focused release of his yet. The over-the-top quality of its ‘80s stylisations meet Grant’s wit just in the right way, and make some poignant points about love and human behaviour. Maybe love is magic, maybe it’s not, but the playfulness, striking lyrical imagery and sheer catchiness of the songs seem to support Grant’s claim that this release is his best album so far. (9/10) (Aiste Samuchovaite)

Listen to Love Is Magic by John Grant here via Spotify, and tell us what you think below!