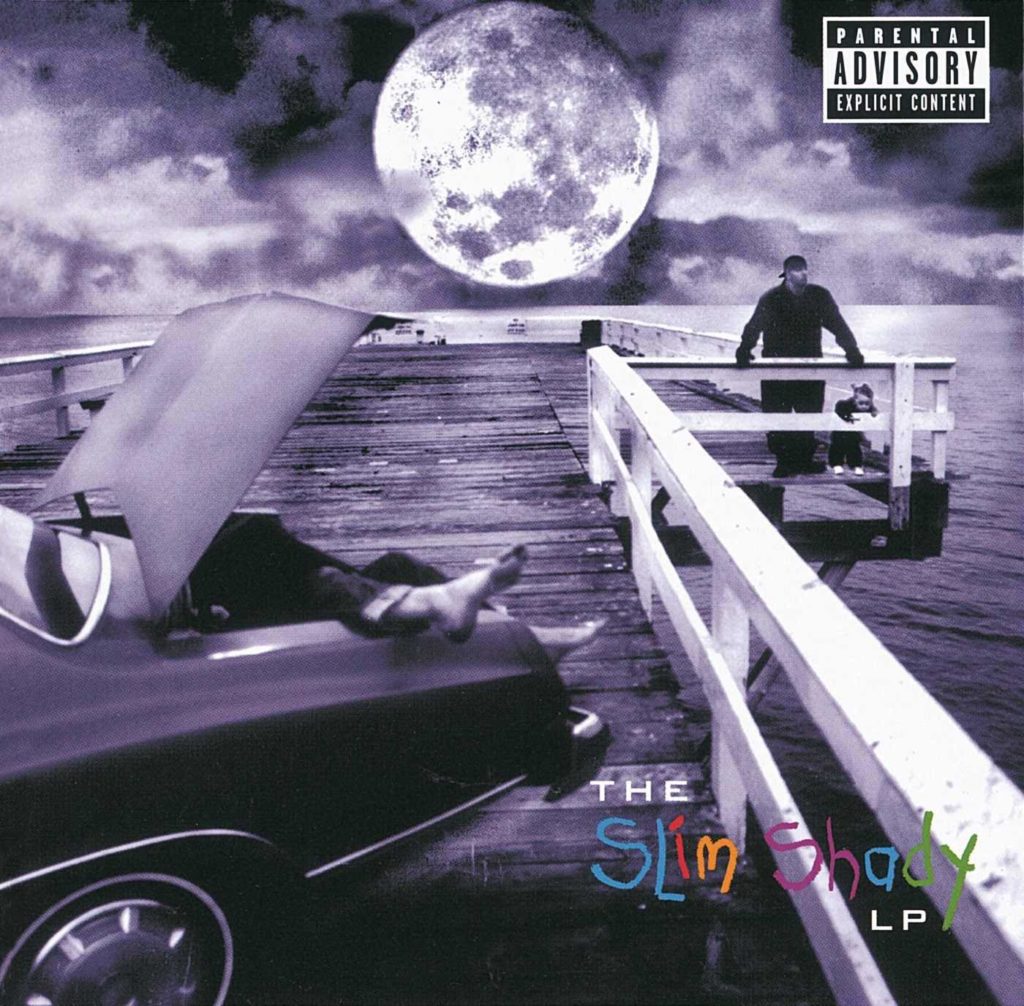 “Hi kids / do you like violence?” So began the opening verse of ‘My Name Is’, the lead single and first track from Eminem’s major label debut album The Slim Shady LP, and unquestionably one of the greatest introductions to a star ever. Not since Elvis Presley was filmed from the waist upwards on the Ed Sullivan show back in the mid-Fifties had a white man doing black music caused so much controversy. To suburban Middle American parents, here was a white-trash, working-class caricature who seemed to have leapt straight from the pages of a comic book threatening to subvert your impressionable kids as they played this CD in their bedrooms. Thus was the curtain raised on one of the 21st century’s most significant and scrutinised musical figures.

Its effect of The Slim Shady LP, in the context of an ultra-conservative Middle America working itself into a righteous lather over rap and metal lyrics, spearheaded by Tipper Gore and the Parents Music Resource Centre, was incendiary and in no small part calculated. Released a matter of months before the Columbine High School massacre in April 1999, something which hysterical religious, community and media figures sought to blame on rock and rap lyrics (particularly those of Marilyn Manson), the outrage that greeted The Slim Shady LP only served to underline the points that the album, and its 2000 successor The Marshall Mathers LP, was making. How righteous (or hypocritical) is it that society can call for censorship over a phenomenon which that same society helped to create and catalyse?

Then again, it wasn’t that easy to tell whether he meant it if you didn’t concentrate. Eminem is a brilliant example of what we now fashionably call an ‘unreliable narrator’ – somebody who is as prone to exaggeration and self-parody as he is adept at dropping deep-cutting truth bombs and almost uncomfortably autobiographical detail. As such, it isn’t always clear when he’s operating in reality and when he’s not. Although he flags up a disclaimer in the opening seconds of The Slim Shady LP that its contents aren’t meant to be taken entirely seriously, before that Labi Siffre sample strikes up to herald ‘My Name Is’, you can see why the result would have been unsettling, particularly as the wider world didn’t know the context of Eminem’s tough childhood and upbringing back then in 1999.

What was immediately clear, though, was his talent. Throughout The Slim Shady LP, Eminem draws on his experience as a battle rapper and comes across like a man possessed, on a laser-focussed mission to make his big chance count and to win respect and credibility as a white guy doing hip-hop – themes that could later be heard on the semi-autobiographical 8 Mile movie and its hit single ‘Lose Yourself’. With Dr Dre and the Bass Brothers’ sparse sonic constructions of deep bass and nagging top-end hooks, there’s plenty of room for Eminem in the middle of the mix to demonstrate his verbal dexterity in his dialled-up Beastie Boys sneer, to show off just how far ahead he was from so much of the cliched gangsta-rap that cluttered up the late Nineties’ hip-hop scene. It’s these technical aspects, and not the initial shock of the violence that’s now faded, that make The Slim Shady LP one of the most memorable hip-hop debut albums.

That said, the violence depicted on The Slim Shady LP is almost cartoonishly heightened and stylised, consisting of revenge fantasies against childhood authority figures, ranging from teachers and school bullies to his own dysfunctional mother. These tend to be the creations of the alter ego Slim Shady, rather than the products of the rapper’s actual authorial voice per se. The most notorious of these is ‘’97 Bonnie & Clyde’, which sees Eminem imagine killing his girlfriend and then disposing of the body with his baby daughter in tow, whom he actually brought into the studio to record the sounds of her cooing and fussing. The shock value comes not just because of what it describes, it’s how he describes it, the perfectly modulated phrasing somehow reinforcing the horror and black humour of the lyrics, more effectively than any amount of unhinged microphone-spitting that he could have chosen to do instead. The fact that he’s being both tender as a father but brutal as a murderer makes it all doubly effective. Eminem memorably followed the song with a harrowing and graphically ultraviolent prequel, ‘Kim’, on his next album following year, whose end dovetails into the opening seconds of ‘’97 Bonnie & Clyde’.

‘Guilty Conscience’, the album’s second single, is much more entertaining, a morality play in which Eminem and Dr Dre play the evil and good halves of the consciences of three men as they consider their actions in different scenarios. It perfectly toes the line between being comical and grotesque, with Dre in great form but never threatening to overshadow his protégé. ‘Brain Damage’ and ‘As The World Turns’ are both school-orientated revenge fantasies; ‘Role Model’ is a sarcastic but cautionary tale; while the compelling drama of ‘Bad Meets Evil’ and the sheer unhinged nihilism of ‘Just Don’t Give A Fuck’ make for late-album highlights.

While the unsavoury aspects of the above can’t be denied, often representing a garish magnification of issues that hip-hop had with misogyny for years, there are poignant and human moments on The Slim Shady LP where the mask drops and we can see the true author, Marshall Bruce Mathers III, the man behind the fictional creation. Mathers was 26 years old by the time he recorded this album, after struggling for years in the mid-Nineties to get his rap career off the ground. His independently released and little-known debut album Infinite had gone almost entirely ignored in 1996, and he, his girlfriend Kim and newborn daughter Hailie were barely scraping by on a series of short-term, dead-end jobs and living in a house in a rough Detroit neighbourhood that was often burgled.

In 1997, recording the demos for what would become The Slim Shady LP after Dre caught wind of it, Mathers created Slim Shady as an alter ego, to be an outlet for the frustration he felt at his lack of success and prospects during those years. As he told Rolling Stone in 2009, on The Slim Shady LP’s 10th anniversary: “Every time I sat down with a pen, everything was just like: fuck you, fuck this, fuck them, fuck that, fuck the world, fuck what everybody thinks. Fuck them.”

‘Rock Bottom’, for example, is a genuinely moving tale of the grinding poverty that Eminem endured while trying to break through, and has that ‘lying in the gutter but looking at the stars’ aspect that often makes for great dramatic effect in rags-to-riches stories. The reflective ‘If I Had’ ploughs the same furrow, this time seeing him fantasise about how he’d show the world if he had the means to get his revenge.

Very quickly upon its release in February, The Slim Shady LP was an enormous runaway success in the final year of the millennium, taking Eminem from underground obscurity to overground mainstream megastardom in under a year. It went four times platinum in the US in no time, and to date has topped over 18 million sales globally. Eminem himself spent a large part of 1999 plugging the record on the Vans Warped Tour, and it yielded the Grammy Award for Best Rap Album the following year. In commercial terms as well as cultural, that made it one of the greatest debuts the genre had ever known.

Infamously, The Slim Shady LP triggered a number of lawsuits, not least from Eminem’s own mother Deborah Nelson, who filed a $10 million lawsuit against him for slander concerning the lyric claiming that she uses drugs in the line “I just found out my mom does more dope than I do” from ‘My Name Is’ and although she won she only received very limited damages. DeAngelo Bailey, named in the track ‘Brain Damage’ as the school bully who tormented the young Marshall Mathers, in 2001 filed a $1 million lawsuit against the rapper for slander and invasion of privacy, which was dismissed from court.

Suffice to say, given that the music industry is increasingly coming around to issues of misogyny in the age of social media, The Slim Shady LP almost certainly wouldn’t get made in 2019 – hip-hop seems to have gotten most of the horror-core element out of its system, the zeitgeist currently favouring sensitivity, politics and self-analysis, in a landscape currently dominated by Drake, Kendrick Lamar and Run The Jewels. It was a product of its time, and two decades on from his major label debut, Eminem may still be an illustrious name but he’s long since stopped being a trailblazer, with recent albums like Revivaland last year’s surprise release Kamikaze completely failing to ignite.

But The Slim Shady LP, combined with The Marshall Mathers LP and The Eminem Show,helped to show that hip-hop could be universal in its appeal, that while it was a music of black origin, it didn’t just have to be created solely by and for black artists and audiences, one of the final perception problems that rap faced at the turn of the millennium. As the 21st century began, radio stations began to be less and less segregated in their playlist choices, and this was in part a result of the runaway success of Eminem, a momentum generated by his debut.

Listen to The Slim Shady LP by Eminem here via Spotify, and tell us what you think below!