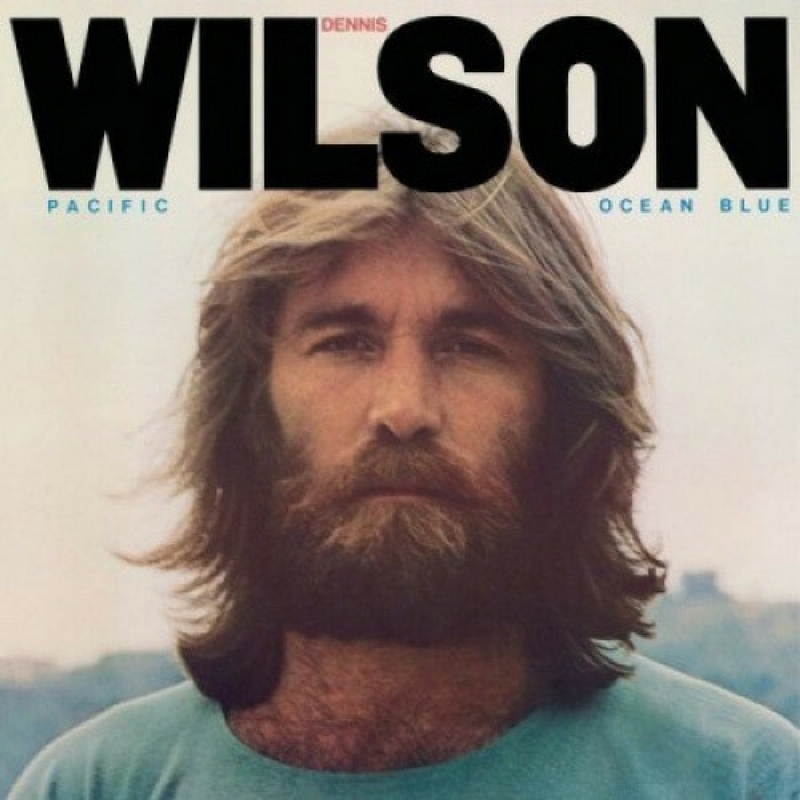 Always the overlooked Wilson brother in The Beach Boys as they rocketed to superstardom, it took a tragically brief solo recording career for Dennis Wilson to cement his reputation as an excellent singer, songwriter and producer in his own right. Pacific Ocean Blue, his first and only album outside of the surf-pop legends and released in 1977, is also the solitary solo album of any real noteworthiness released by any of The Beach Boys – fitting, in a way, as Dennis was the only actual surfer in the band.

Throughout the 1970s, with the Beach Boys’ leader and troubled genius Brian Wilson essentially a recluse and the Mike Love-dominated remnants of his parent band (a ghastly prospect…) becoming more saccharine and shitty by the year, Dennis occasionally went into the studio with his friend and fellow songwriter Gregg Jakobson to work on a new set of songs. This picked up serious impetus in late 1976 when the vast majority of it was laid down at the Beach Boys’ own Brother Studios.

Jakobson remembers an essentially shy Wilson during this time, who simply needed the encouragement he had never received from the brothers’ abusive father. “This was when he fully accepted himself as an artist. Brian had shown him chords on the piano, but as he’d become more proficient the music that came forth was not derivative of that. Having his own studio helped tremendously. With a little encouragement, and the right tools, Dennis took off.”

Pacific Ocean Blue is a essentially a meditation, one man’s attempt to reconcile himself with an outside world which he felt was dark, hostile and had little to offer him. Unlike his brother’s angelic, pop vocal style, Dennis’s voice had deteriorated through years of drinking, partying and general hard living, but through the grizzled and cracked demeanour is the bedrock of a beautiful voice that can do the world-weary folk of ‘What’s Wrong’ or the gently soaring, beatific pop of ‘You And I’ where he can hit the higher notes with a resigned beauty that would escape virtually every other singer.

It has a tender, bruised and melancholic late-night ambience, but also holds a distorted mirror up to the Los Angeles of the early-to-mid 1970s, when being a coked-up rock star (as Wilson was) was still the height of pop ambition. As such, Pacific Ocean Blue is as essential a recording of its time and place as Fleetwood Mac’s Rumours from the same year, despite selling the tiniest fraction of the Mac’s titanic total.

Although he was in his mid-30s when he recorded these songs, he sounds a couple of decades older with his damaged voice communicating an extra gravitas: on the heart-wrenching ‘Thoughts Of You’, for example, Wilson’s voice is strained and beaten down by bitter experience as he laments “like the sunshine / love comes and goes again”. On the aching, yearning ‘Time’, he sings with a sense of hope that rings totally true yet its unmistakably muted by his expectation for things to fall apart again. It’s one of the saddest things ever committed to record, and only Dennis could have done this. His brother, for example, could not have sung Pacific Ocean Blue – it simply wouldn’t have been believable. It’s as if Wilson is performing a kind of therapeutic excavation of his own personality, working through the layers of pain to find his real self, and whether there’s anything worth saving.

The musical contents themselves stand well outside of what the Beach Boys themselves were capable of executing at the time. Recorded as it was over such a huge time period, Pacific Ocean Blue can also be taken as a series of snapshots, of moments in time when Wilson’s confidence as a composer and writer was growing and his ability to meld his soulful pop leanings with psychedelia, R&B and heavier rock stylings was expanding similarly. Some are comparatively simple – the gnarled blues/folk of ‘What’s Wrong’ might have come from Surf’s Up, the last decent Beach Boys record from 1971 – while others mesh with the soulful, West Coast psychedelia of the period to make more complex compounds, such as the mandolin-flecked ‘Rainbows’ or the haunting ‘Time’, which moves from a hushed, confessional opening to a growling, blues-rock middle section with a Chet Baker-inspired trumpet adornment.

That latter song is the second in a consecutive trio of heartbreaking pieces that anchor Pacific Ocean Blue in the middle of the album. The woozy piano ballad ‘Thoughts Of You’, then ‘Time’, then the simple, hopeful pop song ‘You And I’, in which Wilson sings “I’ve never seen the light that people talk about”, are enough to leave the listener a quivering, blubbering mess. That’s soon followed by the beautiful ‘Farewell My Friend’, the B-side to ‘River Song’, a song that was played at Wilson’s funeral in 1984 and described by him as a ‘happy goodbye’.

But Pacific Ocean Blue is not heavy-going, for all of its emotional payload. ‘Dreamer’ is a piece of ‘70s rock coiling itself around brass-tinged R&B; the soulful and gentle ‘Friday Night’ and downbeat ‘Moonshine’ are both West Coast perfection, the blues performed by a disillusioned rich white guy. The opening ‘River Song’, which masses layers of voices on top of one another to gospel-like effect over an undulating, wending piano and vocal figure, is absolutely sublime and the kind of thing that would have been a huge hit for Elton John in an alternate dimension.

Although it sold the same as contemporary Beach Boys solo efforts of the same era and got glowing critical notices, it performed disappointingly in the charts, only peaking at no.96 in the Billboard charts in a short 12-week run. This underwhelming popular reception, coupled with Wilson’s increasingly erratic behaviour, caused his label to cancel a short West Coast tour scheduled to promote the album. Wilson himself soon disowned it as insubstantial. Therefore, very quickly, Pacific Ocean Blue became something of a lost treasure for record collectors, and from 1991 it remained out of print for nearly two decades until an expanded two-disc reissue came out in 2008 to mark its 30th anniversary.

A second album, titled Bambu, was still unfinished at the time of Wilson’s death at the devastatingly young age of 39 in 1983, when Wilson drowned after going swimming following a heavy drinking binge. Homeless for a month before his death, it was an extremely sad end to the hard life of one of the founders of a crucial pop act. Pacific Ocean Blue is a suitably moving memorial to a musical talent that never truly got a chance to shine by himself.

Listen to Pacific Ocean Blue here via Spotify, and tell us what you think below!