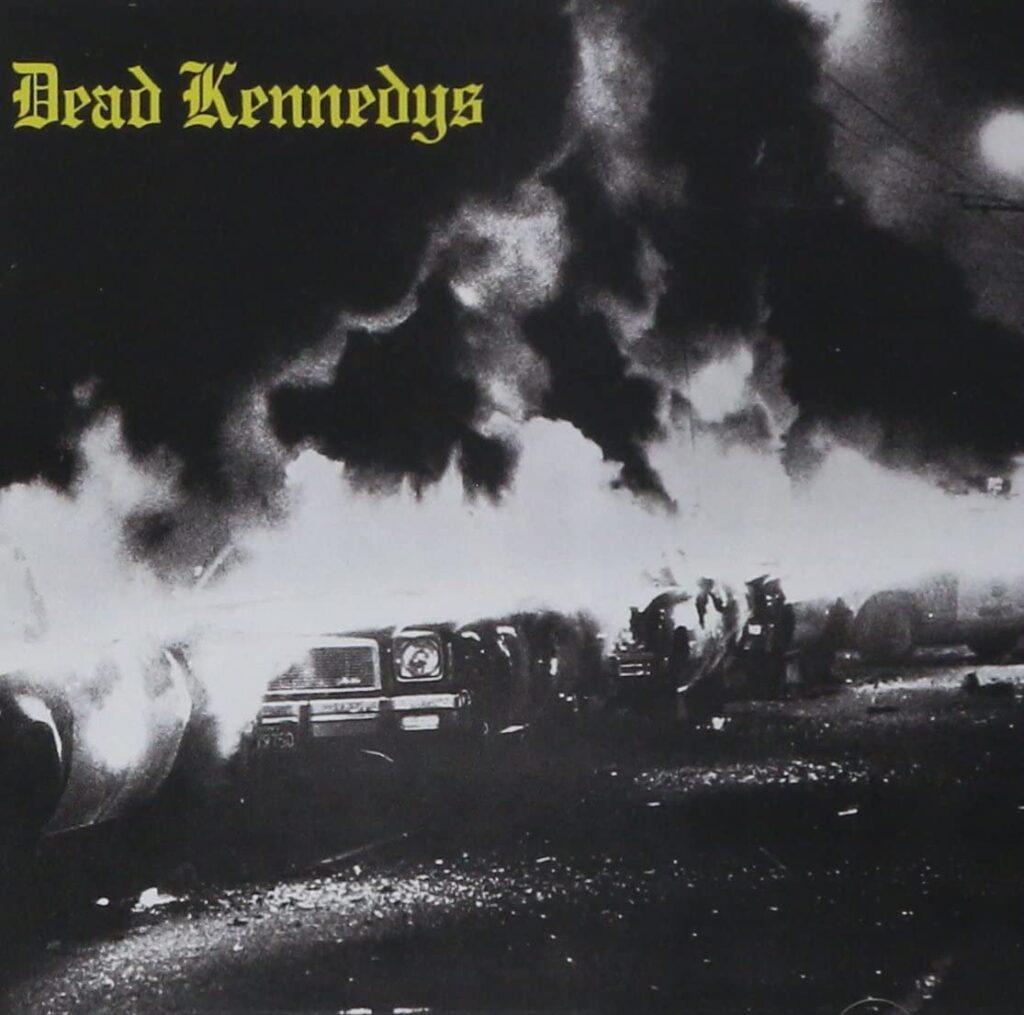 If there’s any classic album that illustrates the massive differences between the British and American experiences of punk and the similarly divergent paths they took, it’s Fresh Fruit For Rotting Vegetables, the 1980 debut from Los Angeles outfit Dead Kennedys. Unlike on this side of the Atlantic, where the three-chord merchants of 1976 and 1977 quickly gave way to artier, more complex expansions and led quickly to post-punk and new wave, in America the likes of Patti Smith and Television had released hugely more intricate and ambitious albums even before 1977 was out. An album as ragingly raw and polemically powered as Fresh Fruit For Rotting Vegetables coming out several months into the next decade, then, seems to defy this narrative.

But the story of punk’s evolution in America should never be viewed as a cohesive, nationwide phenomena. In a country that basically takes up a continent and with no major label networks joining it all up, it’s unsurprising that the scene in New York should be drastically different to that in California, and different again to Washington D.C., for example. On the West Coast, a large number of bands embraced the more purist aspects of punk and birthed a hardcore scene, such as Germs, Circle Jerks and X, but chief among them being Dead Kennedys. Formed in the summer of 1978 after a call-to-arms ad placed in San Francisco’s alternative newspaper The Recycler, they consisted of guitarist East Bay Ray (real name Raymond Pepperell), bassist Klaus Flouride [sic] (Geoff Lyall), short-lived second guitarist 6025 (Carlos Cadona), percussionist Ted (Bruce Slesinger) and headed up by the inimitable Jello Biafra (real name Eric Reed Boucher). Gigging furiously around local venues – where they often performed under pseudonyms, given the band’s provocative name – they gradually built up a cult following in the Bay Area off the back of their massively energetic yet highly technically skilled playing, as well as Biafra’s politically barbed lyrics.

Upon its release, over three years after the initial emergence of punk into popular consciousness, the pared-down style of Fresh Fruit For Rotting Vegetables would have sounded extremely old-fashioned to trend-watchers in pop. But, in terms of its raw power and energy, in truth it’s one of very few albums that are remotely comparable to the Sex Pistols’ debut, always held up as the personification of first-wave punk. Hitting the absolute peak of their powers at the first time of asking – a rarity for many bands of the time – Dead Kennedys were an ideal synthesis of Johnny Rotten’s vitriol and Joe Strummer’s astute sloganeering, but with a crucial levity and un-self-consciousness brought about by Jello Biafra’s political pranksterism. The man had run for mayor of San Francisco in 1979 on a platform of forcing businessmen to wear clown suits within the city limits.

Around this time came Dead Kennedys’ memorable debut single, ‘California Über Alles’. Later included in slightly re-recorded form on Fresh Fruit…, it was a complete exposition of the group’s style and aesthetic encapsulated in a single track. Imagining California as a liberal-approved totalitarian place and aimed at hippie-approved Democrat governor – and, at that point, someone who was being predicted for the White House – Jerry Brown, it drips with sarcasm and deals with the unconscious drift of high ideals into fascistic thought (“mellow out or you will pay”).

This attitude and outlook was accurately translated to the album itself. Fresh Fruit For Rotting Vegetables is a snapshot of a band assimilating influences from practically every kind of music they had ever heard at breakneck speed and churning them out on record unfiltered, with an accompanying production style that was so ramshackle and stuffed in the mid-range that it constantly verges on collapse. It makes for one of the most ‘punk’-ish American punk albums in existence, at least as far as a contemporary British audience would understand it.

It was the perfect context for Dead Kennedys to practice their angry left-wing polemics and sarcastic, withering put-downs. Kicking off with ‘Kill The Poor’, reviving Jonathan Swift’s satirical essay ‘A Modest Proposal’ and applying it to neo-liberal economics, Fresh Fruit… tackles rentier greed (‘Let’s Lynch The Landlord’), militarism (‘Chemical Warfare’) and the distractions pushed by the rich that keep the poor down (their playful closing cover of ‘Viva Las Vegas’).

Crucially, Jello Biafra’s vocal tics and warbles denote a sense of humour at play that stops the whole thing coming off as autodidactic. ‘California Über Alles’ also showed that their barbs were not just reserved for right-wing targets. ‘Holiday In Cambodia’, the only full-group write on the album and easily the most sophisticated moment in structural terms, shellacked disingenuous college-aged students in the West contrasting their lifestyles and plights with that of those being oppressed by Pol Pot’s genocidal Khmer Rouge regime in Cambodia.

Amid this, are were slightly schlocky moments in the form of ‘Drug Me’, with its spooky organ motif threaded through it, and the cartoonishly distasteful and confrontational ‘I Kill Children’. Some of the sketchier and shorter tracks, like ‘Forward To Death’ and ‘Funland At The Beach’, scan slightly more as ballast in comparison to more substantial moments, but they all play a part in the dizzyingly fast-paced display of wit and talent of Fresh Fruit For Rotting Vegetables, which comes and goes in just over half an hour.

It was a galvanizing and critical moment in the development of California’s punk scene, at once leaping to the top of the pack in San Francisco’s already fertile scene and showing Los Angeles’ fledgling punks how it was done. It’s essential listening for anybody who’s a fan of loud, fast and hard music of any description. Dead Kennedys would collapse under mutual loathing in the late Eighties, but not before they released their signature track ‘Too Drunk To Fuck’ the following year, following by a foray into more aggressive hardcore and thrash territory with their following albums and then getting sued for obscenity in the aftermath of 1985’s album Frankenchrist and its graphic artwork. Two reformations and tours have happened since the turn of the millennium, but neither of them with Jello Biafra.

But this second life isn’t really befitting of what was one of the most unheralded yet influential American groups of the last fifty years. Without Dead Kennedys and the impact of Fresh Fruit For Rotting Vegetables to pave the way and establish a scene, it’s hard to imagine platinum-sellers such as Rage Against The Machine, Green Day and System Of A Down – the spiritual children of Jello Biafra – being as well-received as they were.

Listen to Fresh Fruit For Rotting Vegetables by Dead Kennedys here via Spotify, and tell us what you think below!