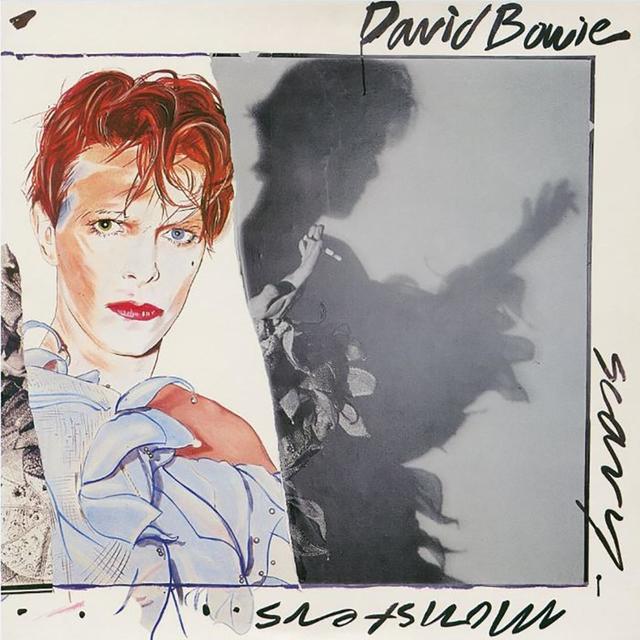 Scary Monsters (And Super Creeps) has long shouldered the heavy burden of being dubbed the Last Great David Bowie album – or at least until his graceful 2010s swansong releases. Virtually every half-decent Bowie record subsequently was always called “his best since Scary Monsters”, whether he was rediscovering his old audiences in the early Noughties with Heathen or winning new ones with left-field puzzlers like 1. Outside.

But, in fairness, it’s not hard to see why. Even at the time, Scary Monsters… felt like the culmination of Bowie’s journey from glam rock pin-up to art-rock and modern pop innovator, and this was an impression that was merely underscored as the artist’s increasingly vapid Eighties wore on. It’s worth remembering, though, that Bowie began the decade with a real bang. The context of this needs to be reflected upon: the end of the ‘Berlin trilogy’ and the simultaneous end of the Seventies, a decade that had seen Bowie at the top of his game for almost all that time and which he had done so much to define stylistically and culturally, could have presented an existential crisis.

But his response to the beginning of the Eighties, when new artists (often whom he himself had influenced) were beginning to threaten his crown, was so perfect as to seem calculated and flawless – right down to the “Often Copied, Never Equalled” tagline that RCA promoted the album with. It’s also a measure of Bowie’s enormous influence in pop culture that an album of such undeniable quality as Scary Monsters (And Super Creeps) rarely gets mentioned in discussions concerning his finest record.

In some ways, Scary Monsters (And Super Creeps) really belongs to the Seventies. It was his fifth and final outing with his established backing band of guitarist Carlos Alomar and rhythm section of Dennis Davis and George Murray. Just like 1977’s “Heroes”, the secret weapon was the guitar work of the mercurial former King Crimson leader Robert Fripp, whose corrosive blasts of arty, metallic electric guitar tones, turning conventional tracks into urgent, memorable and intelligent art-pop masterpieces. Those sounds almost suck all the air out of the compressed, claustrophobic title track, in which Bowie narrates a descent into madness with an enjoyably overcooked Cockney accent to enervating effect. Tracks like ‘Up The Hill Backwards’ and the first of two versions of ‘It’s No Game’ that bookend the album certainly benefit from his raw, angular shreddings.

Furthermore, many of the album’s songs were re-working of ideas that Bowie had had years before. The soulful cover of Tom Verlaine’s ‘Kingdom Come’ and the pleasant ‘Because You’re Young’, for example, were genteel re-treads of territory that Bowie had conquered before. ‘Scream Like A Baby’ had existed as far back as 1973, when it was called ‘I Am A Laser’ and had been written for his then-girlfriend. The Pierrot costume he wears in the iconic ‘Ashes To Ashes’ video recalled his early theatre and mime training with Lindsay Kemp. The song itself concerned Major Tom from ‘Space Oddity’, which by 1980 was an 11-year-old hit, updating us on the character’s situation and revealing that he no longer wants to come back to Earth because the planet is in such a mess. Even the album’s artwork, containing what seemed to be disassembled snippets of Bowie’s previous album covers from Aladdin Sane to Lodger, hinted at a kind of Leviathan-esque reconfiguration of his old personae. In this way, Scary Monsters… scans as a blended encapsulation of all of his identity and musical experiments of the previous decade.

However, it also did enough to sound hip and contemporary alongside the growing post-punk and pop movements. The textured art-pop of ‘Teenage Wildlife’ took aim at the contemporary New Romantic movement, consisting almost entirely of artists who had been Bowie freaks less than ten years earlier, such as Gary Numan and Adam Ant. Despite the occasional vicious lyric like “one of the new wave boys / same old thing in brand new drag” it’s almost certainly meant affectionately: Bowie also invited Visage’s Steve Strange to be in the ‘Ashes To Ashes’ video, and had often visited (and reportedly enjoyed) the scene’s HQ at the Blitz club in London. ‘Fashion’, while in some ways just a reproduction of ‘Fame’ with its stylish dance-pop, anticipated the image-conscious retro obsessions of New York’s dance-punk scene in the Noughties. The wonderful ‘Ashes To Ashes’, a UK no.1 single, was proof that Bowie’s knack for infectious, oddball pop that pointed the way to the future was undimmed with the passing of the years.

For all the critical praise deservedly directed at the incredibly influential and compelling ‘Berlin trilogy’, Scary Monsters (And Super Creeps) re-connected David Bowie with a mainstream audience for the first time since his glam-rock years, on both sides of the Atlantic. It was an immaculate balance of studied, art-house cool and accessible, full-blooded songwriting, and another classic Bowie record at a time when many of his old fans thought he had deserted pop for good. Reaching the top of the UK charts – his first album to do so since 1974’s Diamond Dogs – it achieved global sales that were more commensurate with a star of Bowie’s stature and profile.

Scary Monsters… also served as a useful line-drawing exercise for David Bowie as an artist and as an individual. Leaving RCA and signing for EMI America for a whopping $17.5 million, the globe-straddling success of Let’s Dance was his next move, a conscious and cold-blooded bid for commercial dividends that gained millions of fans but split his existing followers. While enormously successful, this triggered an alarming slump in form (and, eventually, sales and profile) that ended with the notoriously divisive Tin Machine experiment by the end of the Eighties. But as a demonstration of commercial nous balanced with creativity, Scary Monsters (And Super Creeps) is a balancing act of textbook perfection.

Listen to Scary Monsters (And Super Creeps) by David Bowie here via Spotify, and tell us what you think below!