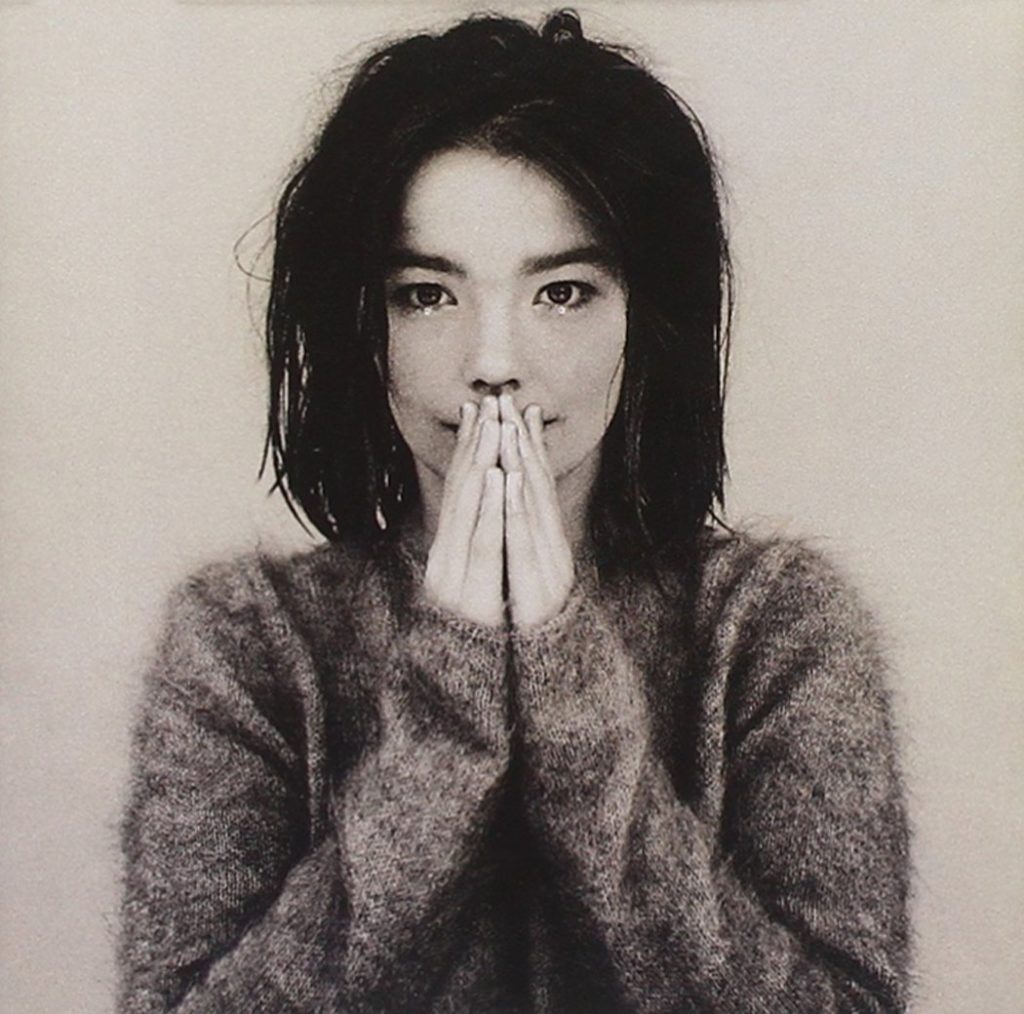 Ironically, despite it feeling so much like the start of a new era both in pop and her own career, Debut was not the first album of the iconoclastic Icelandic artist Björk. Released in 1993 when she had already been in the music industry for 17 years and had won herself respect from international and domestic audiences alike as the singer of the peculiar Icelandic alt-rock outfit The Sugarcubes, Debut was a conscious step towards nurturing a sound and image relevant to what Björk was experiencing at the time and wanted to create.

From the punk and rock scene of Reykjavik to the endless rave parties in London, Björk dove headfirst into her solo career and, working with former Massive Attack producer Nellee Hooper, released an album which for the first time showed the world what the hell was going on in Björk’s imaginative brain. Likened to pages from a diary, Debut narrates endless parties, violent, ecstatic happiness, gorgeous feminine masculinity and all-consuming love. Adorned in Bombay-born strings, samples of bottles smashing and babies babbling, Debut is a technical feat as well as a creative one, planting and hinting at the future conceptual crazes that Björk explores in her later albums with a blend of jazz, house and electronica, moulded by her classically trained brain yet also informed by her enthusiasm for the peculiar and the extreme.

With Björk’s exuberant Debut sound was born her lasting relationship with electronica. That and its additional influences is what made it such a polarising record to receive from an artist who had previously been known for the experimental, but who had still more or less been oriented around alternative rock. Björk had been known as the ‘quirky’ shrieking ‘elfin’ (the rock press, back in the day, loved to call Björk’s facial features, general appearance and mannerism as elf-like and almost infantile) from That One Bizarre Country With The Volcanoes, and many of the expectations for her solo career were concerning rock as she had been fronting and playing with bands that either stirred up the punk scene in Reykjavik (Tappi Tikarrass, KUKL) or gained international acclaim through their peculiar mix of spoken word, rap and melody with The Sugarcubes.

Consequently, few were prepared for Debut, with its glorious explosiveness and contrasting musical influences. Rolling Stone, the mainstream rock critic’s bible, said that it was “the utterly disappointing result [of Björk’s solo career]. Rather than sticking to rock & roll, Debut is painfully eclectic.” Apparently, Rolling Stone were neither fond of ‘Venus As A Boy’ and its non-Western sonic influences, nor the general electronica direction that Bjork was taking. But what makes Debut iconic and defining of Björk’s developing sound, made it ‘painful’ according to some back in the day. This could either be a prickly comment on the subjectivity of record reviewing, or a poignant point in how artistry can’t always be appreciated fully at the time of its release. Either way, it shows that the world wasn’t ready for the sort of dynamite that Björk was packing with Debut.

Upbeat, overflowing with thirst for life and incredibly dynamic, Debut had not only drum machines and keyboards, as expected from a 1993 release by an artist immersing herself in the party scene of the time, but also musique concrete-inspired soundscapes, strings written and recorded in Bombay, samples of a baby cooing and crying in a Pampers commercial and jazz-birthed disharmonic saxophone writing. This eclectic mix not only reflects Björk’s later overall tendency to mix and match styles to best express her own version of the human experience, but also rounds out Debut to be exceptional in its experimental nature. The Indian strings, tablas and vibraphone make the Talvin Singh-produced ‘Venus As A Boy’ sound like nothing else on the album, and has been an enduring fan favourite since. Its sensuality is supported by the twinkling whimsical sounds, coming off as both playful and tastefully erotic. Singing about a boy who views life through the lens of un-superficial beauty and is likened to Venus, the goddess of love, paints an unusual picture of the man as the seductress while the sample of smashing glass bottles keeps the rhythm exciting.

‘There’s More To Life Than This’ is said to have been recorded during a party, ironically juxtaposing the recording setting with the material and idea of the song. “Come on girl / Let’s sneak out of this party / It’s getting boring / There’s more to life than this” breathily sings Björk, making it sound as if she’s whispering this in your ear while you’re pouring yourself another drink. Throughout the song, the hum and buzz of people chattering can be heard in various sound levels as Björk seems to be walking from one room to another while singing and recording that track. This is a yet another great example of how, by playing with atypical instrumentation or recording technique, Björk confirms or negates the song’s setting or meaning. Just like in ‘The Anchor Song’ as well – the clashing saxophones create the illusion of boats and living near a dock, where the song’s progenitor “drops her anchor” and announces it her home. Such use of the ‘soundscape’ concept (‘There’s More To Life Than This’, ‘Aeroplane’, ‘Like Someone In Love’) could be said to be linked with Björk’s classical musical training that she received while being a child and later on denounced, yet it elevates the tracks out of the recording booth and into the ‘real world’ – where the songs are actually set, pulsing with life and narrating Björk’s youth.

WHAT DOES IT LOOK LIKE AND HOW DOES IT MAKE ME FEEL?

Sonic influences aside, another strong relationship that was further developed in Björk’s future projects yet born during the era of Debut was the exquisite artistic synthesis of sound and image. The music videos of Debut not only put a face and an aura to the voice and the music, but also expanded upon the creative plain Björk was messing with. That included dancing atop a moving truck with the backdrop of New York in ‘Big Time Sensuality’, the whimsical yet horror-esque imagery created hand in hand with filmmaker Michel Gondry in ‘Human Behaviour’, and the slightly tacky green mental institute ‘Violently Happy’. With sometimes unsettling yet always intriguing music videos Bjork stated herself a visual artist as well as a musical one, twenty years later to set off on a VR tour with the music videos of Vulnicura – so elaborate that they needed their own tour and the most immersive video viewing experience that was technologically possible at the time.

The birth of the music video as an art piece with its own concept and ideology in Björk’s career could be tied to the creation of the video for ‘Venus As A Boy’. Directed by Sophie Muller, it’s inspired by one of Björk’s favourite books – a 1928 erotic French novella called ‘Story of the Eye’ by Georges Bataille. Narrating the sexual perversions of a couple, the book’s and its characters’ obsession with eggs translated into Björk herself playing with and marvelling at eggs in the video, adding a sensual and unorthodox touch that compliments the marvel in the lyrics. Not everyone might be comfortable with watching Björk be super excited about eggs while knowing the background and source of the action, in the same way as not everyone can calmly watch Björk seemingly piercing her skin to embezzle it with pearls in the video of ‘Pagan Poetry’ or caressing a CGI entity in ‘Blissing Me’. Maybe we as a culture are just incredibly uncomfortable with sexuality and therefore Björk’s free experimentation with the concept makes us squeamish automatically, but the point that her music videos are artistic feats in themselves that constantly push boundaries and are a defining quality of presence stands, and has stood for years.

SEEDS FOR THE FUTURE

Debut was the spark that set Björk’s career and vision alight. Containing numerous hits that held against the test of time as well as were successfully catchy and relevant at the time when pop songs didn’t have algorithms that made them irresistible ear worms (basically pop crack), it managed to be both mainstream and avant-garde with its mesh of stylistic influences and experimental recording and production techniques. It reinvented the image of the female artist for the pop scene and raised the stakes of what it means to truly be the author of one’s sound. 25 years later, Björk is still one of those artists that can’t miss with any of their releases as their creations constantly drastically morph artistically and always manage to surprise. Innovative, unbridled, a force of nature, Björk and her Debut sprouted from an album to an institution of an artist – unquestionably iconic and always truthfully artistic. (Aiste Samuchovaite)

Listen to Debut by Björk here via Spotify, and tell us what you think below!