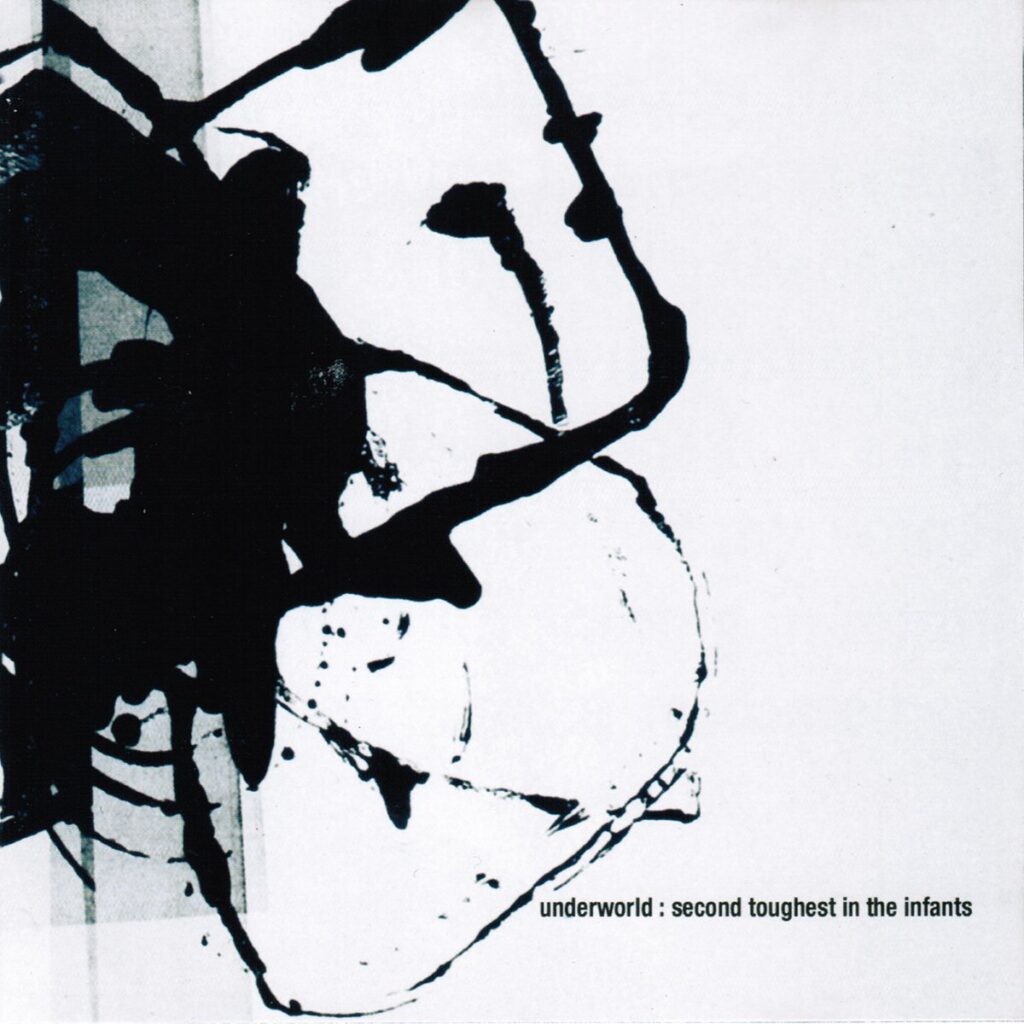 In the summer of 1996, at the height of Cool Britannia, a remix of a little-known minimalist house single that had stalled well outside the UK Top 40 the previous year took the charts by storm. Ironically, for a track that didn’t have a guitar in sight, it defined the cartoonish, coked-up over-confidence of Britpop as much as any lighters-aloft Oasis anthem. That track was ‘Born Slippy .NUXX’, by Underworld. A more or less complete overhaul of the original, instrumental ‘Born Slippy’, the remix became one of the most sonically extreme hit singles of all time when it powered to no.2 in the singles chart off the back of its use in Danny Boyle’s zeitgeist-defining film Trainspotting. Alternating between hedonistic bliss and pure, amphetamine energy from start to finish, with thumping techno beats and frontman Karl Hyde’s memorably shamanic vocal performance.

By its very nature, ‘Born Slippy .NUXX’ was of course not to be found on any Underworld album, but its success did have a gravitational effect in directing mass attention towards the Essex-based outfit’s 1996 studio album, Second Toughest In The Infants, the group’s fourth record but their second as a trio. After a faintly embarrassing and dated brace of arty, synth-pop albums in the late Eighties, Hyde and Rick Smith were joined by Darren Emerson, a DJ ten years their junior, for their 1994 album dubnobasswithmyheadman. It was a seminal release in the evolution of British dance music, and put Underworld at the bleeding edge of a rapidly evolving scene, but it was largely an underground phenomenon.

Taking its title from a comment made by Smith’s six-year-old nephew when asked about how he was getting on at infant school, Second Toughest In The Infants represented another exploration of the template that the trio had established on 1994’s dubnobasswithmyheadman. But in comparison to the knockout blows of that album, Second Toughest… was more nuanced and detailed, and dimensions more advanced than the infantilising, chart-bound house music of the mid-Nineties.

To begin with, the album opens with two lengthy, multi-segmented tracks whose component parts segue into each other and both tip the quarter-hour mark. The opening sequence of ‘Juanita’, a deep house marvel, collapsing perfectly into the thumping techno of ‘Kiteless’ and then the curious coda of ‘To Dream Of Love’ in which Hyde speeds up an audio clip of himself listing the colours of cars as they go past him, is unabashed Underworld magic. Almost as great is the mannered, immersive drum ‘n’ bass of ‘Banstyle’, out of which emerges the treated, half-speed murkiness of ‘Sappy’s Curry’ (like ‘Born Slippy’, named after a greyhound that the band bet on at a race).

Combined, these two openers take up over half an hour, but Smith, Hyde and Emerson’s compositional sense meant that not a single second of this sequence was wasted on indulgence or showiness. Things are continually pushed forwards, new elements introduced or swapped out. The label ‘progressive house’ was attached to what Underworld were doing, which may have made it sound pretentious, but there really was something of the structural ambition of prog-rock going on, interfacing perfectly with the euphoria of house and techno.

The rest of Second Toughest In The Infants isn’t as convoluted in its structure as its opening two tracks, but nevertheless stand up as a tour de force of some of the most up-to-date styles that the British electronic music scene had to offer in 1996. The breakbeat storm that emerges from the submerged, aquatic ambience of ‘Pearl’s Girl’ is another moment in Underworld’s catalogue that they’ve rarely emulated themselves; ‘Confusion The Waitress’ is an ambient house piece aimed at the dancefloor, contrasting neatly with the junglist mentalism of ‘Rowla’ that directly follows it. The closing duo of ‘Blueski’ and ‘Stagger’ make for a nicely low-key ending, the first track a short, beatless track with little more than a twisty, slippery guitar figure, while the latter is a light and faintly melancholic arrangement.

Foregrounded by Emerson and Smith’s production wizardry, ear-catching but unobtrusive, is Karl Hyde’s inimitable vocal and lyrical style. Throughout, he comes off as a kind of oracle, some cryptic truth-teller – there’s something profound (or profoundly meaningless) about his streams of consciousness, whose truth we could unlock if we could somehow tune into that off-beam wavelength.

Sophisticated and cool but also earthy and hedonistic, Second Toughest In The Infants was the apotheosis of Underworld Mk.II in terms of their creativity and commercial success. This was electronic dance music performed by artists who recorded albums, had public-facing profiles and played festivals, rather than by faceless DJs releasing one-off singles. This appealed to a newly-minted alternative audience that the major labels had found in the wake of The Stone Roses and Primal Scream’s Screamadelica, attracted to both rock and dance who flocked to Underworld and other artists like Leftfield, The Prodigy and The Chemical Brothers.

Twenty-five years on from its release, Second Toughest In The Infants still stands as a landmark album in British dance, and a reminder that intelligent, outré electronic music can attract and hold mainstream attention. Underworld were to make one more album as a three-piece, 1999’s diverse and colourful Beaucoup Fish, before Emerson’s departure. Karl Hyde and Rick Smith continue as Underworld to this day, but while subsequent releases have often been of high quality, none of them has touched the superlative, era-defining heights of their seminal Nineties output.

Listen to Second Toughest In The Infants by Underworld here via Spotify, and tell us what you think below!

Influenced by: Fluke, 808 State, The Future Sound Of London, The Sabres Of Paradise, Orbital