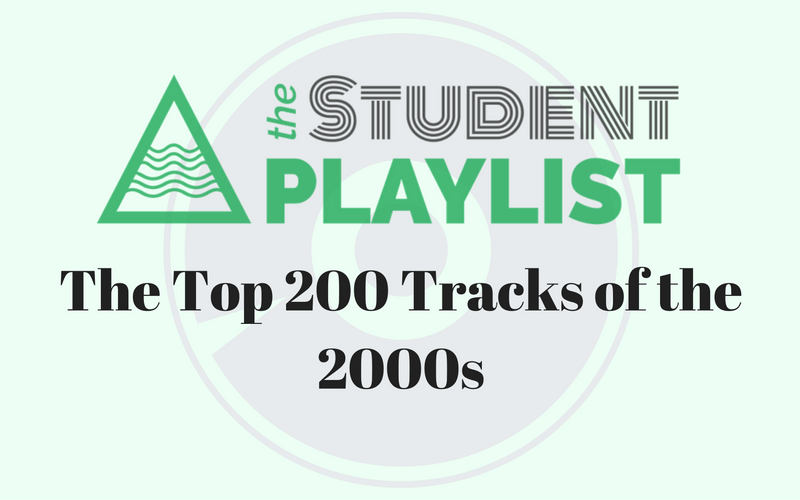 A stand-alone single meant as a companion piece to 2001’s Rock Action album, Scottish post-rock gods Mogwai described the cavernous 20-minute epic ‘My Father My King’ as “two parts serenity and one part death metal”. Completely instrumental and based on the melody of a Jewish prayer titled ‘Avinu Malkeinu’, it had been used to close Mogwai’s live shows for years and was at last captured on tape by the legendary Steve Albini. Like a fire catching with a tiny spark and spreading outwards and upwards into a raging inferno, it is one of this incredible band’s finest moments.

Originally released as an AA-side with ‘Staying Fat’, more than a year before it found a new lease of life on debut LP Silent Alarm, ‘Banquet’ was the perfect distillation of Bloc Party Mk.I – before they decided to ‘go dance’. Paul Epworth’s intricate yet bright and clear production makes the track sparkle, but it was the band’s remarkable self-assuredness and intelligence to absorb punk, funk and club music that made their brand of music so distinct in 2005, and what makes it still sound fresh more than a decade later.

The lead single from yet another career masterpiece, ‘Good Fortune’ saw Polly Jean Harvey in a good mood for a change, with its parent album Stories From The City, Stories From The Sea telling tales of wild, passionate romance and gentle contentment in comparison to the ghostliness and anger of her ‘90s output. Channelling the performance styles of rock frontwomen who had come before her – namely, the street-wise ebullience of Chrissie Hynde and the bruised poetry of Patti Smith – PJ’s vocal swooped and dived over a strident slice of jangling indie.

Spending 11 consecutive weeks at Number One in the States on the back of its use on the Charlie’s Angels, the no-nonsense, kick-ass R&B of ‘Independent Women’, with its ultra-sharp feminist slogans (“I depend on me”), was the point at which Destiny’s Child stopped being merely a big deal and became absolutely massive, a cultural force that made a global superstar out of lead singer Beyonce Knowles.

Classic rock, Philly hip-hop and Atlantan neo-soul met on this insanely addictive re-tooling of a track from Cody Chesnutt’s The Headphone Masterpiece. Featuring the original vocals and quality guitar licks from Chesnutt’s original, progressive hip-hop artists The Roots updated his unfinished-sounding lo-fi cut by adding some jazzed-up samples and some serious bass and rhythm to make a true modern classic that can always be relied upon to get a party started.

Providing an important moment of genuine heart and soul amid the frenetic art-punk party of their debut Fever To Tell, ‘Maps’ was a skewed power ballad driven by Brian Chase’s tumbling drums and Nick Zinner’s shimmering, sparse guitar lines. However, at the centre of it all was a strikingly unguarded vocal from Karen O that was wholly unexpected given the whirlwind physical performances she had previously been given to. Dedicated to her then-boyfriend, Angus Andrew of Liars, ‘Maps’s video saw her shedding real tears as her voice quavered “Wait!”, before plaintively and simply stating “they don’t love you like I do”. An utterly beguiling modern indie love song.

You wouldn’t have thought a seven-minute, largely instrumental math-rock epic with a vocal that sounded like a demonic chipmunk could become one of the trustiest indie disco floor-fillers of the decade, but that was the gloriously unlikely genius of New York’s Battles. Taking the most casual of approaches to the ideas of structure and time signatures, they presented a genuinely forward-thinking vision for popular music with their debut Mirrored, of which ‘Atlas’ was the memorable highlight. Featuring a colossal mid-song build-up and breakdown, it’s simply impossible to stay still listening to it.

Presented in a downbeat manner but unmistakably optimistic in its tone, ‘Weak Become Heroes’ added some gravitas to Mike Skinner’s debut album Original Pirate Material that safeguarded it from being written off as a novelty. Featuring gentle loops of house piano set to muted UK garage, its story of a raver heading out to a party turns out, in its final verse, to be the memories of the same person looking back on his glory days when he’s five years older. A piece of beautifully understated nostalgia dedicated to the heady heights of British rave culture in the ‘90s, it was unmistakable proof of Skinner’s immense talent.

The third of three non-album singles that preceded LCD Soundsystem’s self-titled debut, ‘Yeah’ came in two versions, titled ‘Crass’ and ‘Pretentious’. It’s the first of these, a riotous, jagged call-to-action that united the dance and rock kids, that was the stand-out. Sprawling over nine-minutes of building synths, bleeps, cowbells and counter-rhythms before burning itself out in a spiking synth pattern, this truly was machine music played by humans. It provided possibly the truest reflection of James Murphy’s personality, including what might be his personal valediction in the lyrics: “Everybody keeps on talking about it / nobody’s getting it done.”

A piece of cosmic wonderment in which Wayne Coyne and the Flaming Lips had been so expert for so many years, ‘Do You Realize??’ might just be the most celebratory song about death in pop music. Sublimely arranged to sound simultaneously vast and intimate, it embraced rock clichés and truisms like “everyone you know someday will die” and made them sound life-affirming. In this way, the song captured both the seriousness and insignificance of life on earth at the same time, with lyrics that were profound and revelatory in Coyne’s hands. Also, fun fact: it was briefly the official state song of the Lips’ home state of Oklahoma between 2009 and 2011!

A spectacularly ornate 12-minute piece of sunny, psychedelic pop that managed to be both retro and forward-thinking at the same time, ‘Bro’s’ was the centrepiece of Noah Lennox’s exceptional Person Pitch. Inspired by a move from the States to Lisbon, the Animal Collective member paid homage to the ‘60s by variously sampling The Tornadoes, The Equals, Cat Stevens and an owl for this sprawling mini-epic which pointed a way forward for dozens of subsequent artists in the digital, everything-all-at-once landscape.

Originally released as a download and a strictly limited 7” single, ‘Daddy’s Gone’ was an emotional tribute to all the greatest pop music in history, sounding like Phil Spector producing The Jesus & Mary Chain covering a Ronettes song (it even used the same drumbeat from ‘Be My Baby’, and drummer Caroline McKay even performed standing up like JAMC). A touching and bittersweet story of a young man’s relationship with his absent father, not a subject often touched upon in pop, it turned Glasvegas into genuine contenders to be the heirs to Oasis.

A track that’s long since become Jay-Z’s own kind of personal anthem, and by a distance his most famous hit, ’99 Problems’ tells a story of ignoring the critics and keeping your head up, as well as dealing with racial profiling from police officers that has taken on renewed relevance in recent years. Set to some triumphant stadium guitar chords and punishing beats courtesy of his hook-up with Rick Rubin on The Black Album, this was Jay-Z’s proper crossover moment, taking him from rap superstardom to household name.

Quite simply one of the best cover versions in history, Johnny Cash took Trent Reznor’s spindly, fragile closing track from Nine Inch Nails’ The Downward Spiral and, with the help of producer Rick Rubin, stripped it back and made it resonate with symbolism. With its incredibly moving video, which placed footage of the glories of his past next to the cruel realities of Cash’s present state of physical frailty, Reznor’s admission of vulnerability was transformed into an unnerving meditation on mortality, sung by a man who knew he was not long for this world and was making his peace.

The claustrophobic centrepiece of Radiohead’s game-changing Kid A, ‘Idioteque’ was the best illustration of the drastically different course that the band had plotted post-OK Computer, influenced by the IDM sounds of Aphex Twin, Autechre and Warp Records. Thom Yorke sounds like he’s having a panic attack, urgently warning the listener as to some unseen danger with “this is really happening”. With its chord pattern sampled from electronic music pioneer Paul Lansky’s 1973 work ‘Mild Und Leise’, it’s a perfect example of Radiohead’s ability to deploy unconventional methods and sounds in conventional ways.

A timeless slice of pop brilliance indebted in equal parts to Kraftwerk and the shiny, mass-produced ‘80s pop of Kylie’s own career, ‘Can’t Get You Out Of My Head’ completely revived her status in the eyes of the public. Going to the top of the charts in every European country except Finland, selling a million copies in the United Kingdom, it immediately scanned as a classic, shimmering with Arctic-blue minimalism as the music interplayed perfectly with Kylie’s aching vocal, utterly contemporary but hinting at a pop era yet to come.

It’s rare that such an overtly religious song gets on to the airwaves of mainstream radio, but ‘Jesus Walks’ was the undisputed highlight from Kanye’s excellent debut The College Dropout. In an adventure-playground LP of many moods, he got serious for a moment. Combining a pulsating, marching rhythm with a little modern gospel fervour, it’s a perfect musical setting for Kanye as he rues his mistakes as he proclaims his devotion to Jesus despite straying from the path he knows to be the straight and narrow. Surprisingly, for a fourth single from an already successful album, it went double platinum in America.

An absolutely sublime piece of dancefloor magic from DJ Andrew Butler under his Hercules & Love Affair pseudonym. Club music is traditionally about devotion (unrequited or otherwise) and hedonism – ‘Blind’, with its heartbreaking lyrics of lost innocence and total hopelessness, offered neither, but somehow it worked spectacularly. Antony Hegarty’s androgynous vocals are positively heaven-sent, his vulnerable voice unexpectedly making perfect sense in a previously unheard club setting, and tie the musical package together. Disgracefully overlooked and underappreciated at the time, ‘Blind’ remains one of the most delightful cross-genre meetings of the decade.

Like New Order meeting James Murphy in heaven, ‘Kids’ was the third of three incredible singles unleashed from MGMT’s kaleidoscopic debut Oracular Spectacular. A big, bold synth hook that wouldn’t leave your head, with lyrics reminiscing on childhood and innocence that started life as a college dorm piss-about, Ben Goldwasser and Andrew VanWyngarden accidentally created one of the most memorable hit singles of the decade. Boosted by countless media licensing arrangements and a brilliant, controversial video involving some pretty trippy monster effects, a toddler and Joanna Newsom, the track’s cultural life was extended for many years and became their signature hit.