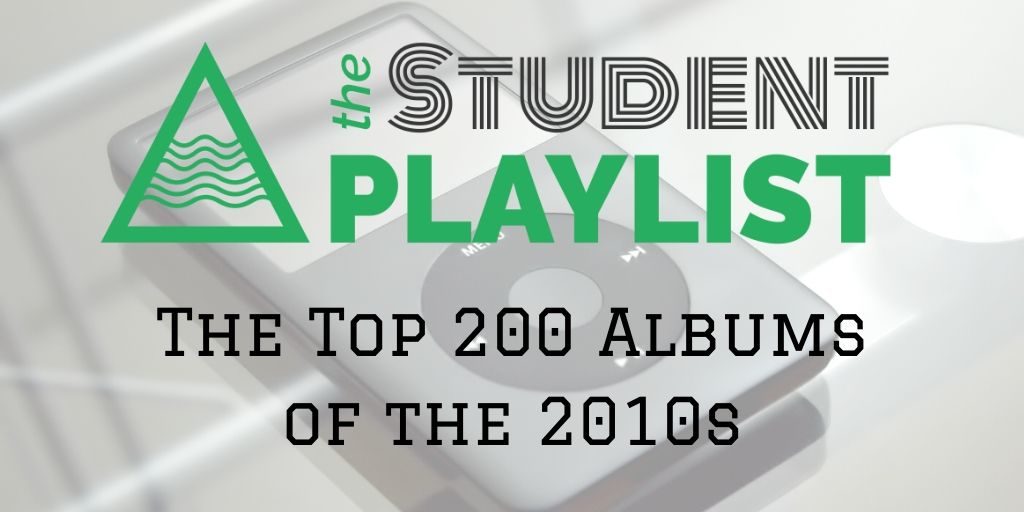 Though they were out of the game for a long time – eight years separated Random Access Memories from the disappointing two-dimensionality of 2005’s Human After All – Daft Punk’s extended absence only served to heighten public interest and anticipation in the duo. When they eventually did return, powered by the humungous dancefloor smash ‘Get Lucky’, which hit commercial peaks that even the biggest bands only dream about, Random Access Memories had so much riding on it that some expected it to be the next great revolution in dance music. It wasn’t – but then again, it didn’t try to do be. Instead, Thomas Bangalter and Guy de Homem-Christo penned an extended musical love letter to their influences and childhood musical favourites. It never really explodes into the regular 4/4 thump that characterised so much of their back catalogue: rather, tracks like ‘Doin’ It Right’, ‘Give Life Back To Music’ and ‘Lose Yourself To Dance’ were exercises in studied restraint and relaxed cool. When they did pull out the stops, on ‘Giorgio By Moroder’ and ‘Contact’, it was precision-tooled to perfection. Random Access Memories was a chilled-out delight, and a critical and commercial success to boot. (LISTEN)

At this point, a Beyoncé album will most likely end up being a cultural moment regardless, but 2016’s Lemonade exceeded the expectations of even the most die-hard BeyHive members. More than just an extremely solid pop album, it is an emotional exploration of the married life, its tribulations and its moments of empowerment, as well as a political exploration of what it means to be a black woman in America. Perfectly employing its many collaborators, to an excellent guitar riff and blues-y vocals from Jack White on ‘Don’t Hurt Yourself’, to The Weeknd’s sensual modern R&B take on ‘6 Inch’ to Kendrick Lamar’s politically charged verse on ‘Freedom’, Lemonade excels on all fronts as one of the most lyrically empowering, culturally relevant and musically propulsive statements in popular culture this past decade. (EW) (LISTEN)

Joe Mount has come a hell of a long way given the inauspicious start to his career. Second effort Nights Out was the toast of the hipster underground in 2008, but he took one hell of a leap forwards with The English Riviera, emerging into the mainstream with his sense of outsider humour totally intact. The secret to its success was restraint, in comparison to its predecessor’s sense of ecstasy and abandon. In it, Mount re-imagined the decaying beauty of the background to his West Country seaside childhood as a glitzy equivalent to Cannes and Monaco, with the sense of limitless possibility and dreams coming instantly true always just out of reach. The jaunty nonchalance of ‘The Look’ and the holiday-for-synths of ‘The Bay’ and ‘Everything Goes My Way’ were the highlights, but every moment of The English Riviera was infused with that quintessentially English outlook that is rapidly disappearing from the indie scene here. An album to make you believe in the transformative power of pop. (LISTEN)

Always the grandiose innovator, Janelle Monáe’s Dirty Computer is another conceptual pop album. Though unlike her more tangible storytelling concepts of previous releases such as The ArchAndroid based on the classic sci-fi movie Metropolis, Dirty Computer is more a general statement of owning up and being proud of one’s Otherness from mainstream society: being black, queer, a woman, etc., and all the baggage that comes with it. (EW) (LISTEN)

The ever performative Annie Clark underwent another Bowie-esque character shift on 2017’s Masseduction. Always quite effeminate in her presentation as St. Vincent, Clark took to a near caricature of sexual female empowerment this time around, donning neon pink, excessively high heels, leopard print, and other visual signs of anything but subtlety. The songs reflect this transformation, taking on a more synth-led, rather than guitar-led, borderline Kraftwerk-like approach to most of the more up-beat tracks: from the celebration of all things sexual on the titular track, to the ecstasy trip of a song that is ‘Sugarboy’. The heart-wrenching ballads also make an appearance on the track list of course: there’s the gorgeous ‘New York’ that laments the gap that a close friend leaving the city also leaves in your life, and the sad in that particular self-reflective way that St. Vincent ballads tend to be ‘Happy Birthday, Johnny’. Produced by Jack Antonoff, the album walks the interesting line between popular music in all of its excess, and the avant-garde sensibility and performative leanings of St. Vincent. (EW) (LISTEN)

A tale as old as time: an artist known for experimentation and being generally left-field develops an affinity for catchier, poppier song structures for a change and everything goes haywire. Fans are mad – you’ve changed! You’re POP now!  – and (get this) Grimes herself calls it “a stain on my life” a couple years down the line. So, reception was rocky, and the creator is very critical of their work, but let’s be real – Art Angels is probably the best of Grimes that we’ve heard so far when it comes to experimental electronica that is formulated in a way that still manages to permeate the mainstream. Sure, it might lack the more bedroom-bound, avant-garde touch of Visions, but its offer of super-strong, captivating tracks that stick real good, showcasing the glitz and potency of Grimes as an artist and producer. At times unsettling, Art Angels was like a rabid dog, overflowing with energy and stories of space-travelling vampires and whatnot, therefore not the most subtle. It feels a bit like a professionally-done mixed-media project of an arts student, something stuck together from bits of string, stickers, make-up and body parts – something fascinating, on-the-nose and beautifully almost off-putting, but catchy nonetheless. (AS) (LISTEN)

Having started life as an (almost) regular band with 2008’s Beat Pyramid, one of the most wilfully awkward albums that could conceivably be housed under the umbrella term of ‘indie’, These New Puritans went totally off the grid for its follow-up. Jack Barnett, one of the most prodigiously talented young arrangers in music, described Hidden as “dancehall meets Steve Reich”, but no amount of labelling can describe how truly special and unique the record is. Sitting in under-explored territory beyond prog rock, indie and hip-hop, Barnett brought together all manner of disparate elements, evolving a series of compositions initially intended for the bassoon. Subsonic bass beats, six foot drums, Foley recording techniques (the melon covered in crackers struck by a hammer to simulate a human skull being smashed on ‘Attack Music’ became legendary), a 13-piece orchestra and children’s choir all went into Hidden: the result was a suite of eleven songs that alternated between being implacably hostile and deeply moving. (LISTEN)

The hugely anticipated second album by hip-hop collision Run The Jewels not only matched the brilliance of its predecessor, but surpassed it. Consisting of 11 slick, modern hip-hop uppercuts delivered with lethal force and accuracy, RTJ2 was a whirlwind of lyrical dexterity and rhythmic invention condensed into a lean, muscular 39 minutes. New York’s El-P and Atlanta’s Killer Mike’s different strengths dovetailed beautifully, the former’s concrete-hard delivery and the latter’s psychedelic Southern drawl creating a unique mix, and their anger is so real and seething you can almost touch it. RTJ2 takes on bullshitters, hypocrites and fakers occupying American politics and society, most vividly on ‘Close Your Eyes (And Count To Fuck)’ which describes a prison riot (“We killin’ em for freedom cause they tortured us for boredom”). But despite its ‘state of the nation’ feel it never comes off like a soapbox lecture, always making sure to put fun first. (LISTEN)

Clocking in at just under three hours, The Epic truly was an appropriate title for Kamasi Washington’s first major-label statement. With the spotlight on him as a result of his involvement arranging Kendrick Lamar’s To Pimp A Butterfly, the saxophonist turned in a record that both scanned as a love letter to the history of jazz but also changed the nature of the cultural conversation about the genre. Embracing elements of funk, gospel and soul and expressing them in a range of moods, from the free-form intensity of ‘Askin’’ to the gentle, smooth likes of ‘The Magnificent 7’, The Epic was nothing short of the greatest jazz album of the 21st century. (LISTEN)

Morbidly, we as humans sort of prey on vulnerability and truth. We feed on pain and grief as well, and however we’d like to assure that music encourages empathy and understanding, providing support in shared hardship, honestly speaking, very little people would ‘like’ to genuinely experience what Phil Elverum excavates on his eighth Mount Eerie album A Crow Looked At Me. The musician’s wife tragically died from pancreatic cancer and he wrote an album that’s, obviously, morbidly heart wrenching. It’s quite literally Elverum trying to cope with his grief through music, and therefore it’s impossible to separate the emotional core of this album from its form, maybe even futile, and hailing A Crow Looked At Me as Mount Eerie’s ‘best’ knowing the context is insensitive to say the least. But, it is undeniable that its subject matter sent shockwaves through the music community.

Elverum’s usually loose lyrical structure here hits especially hard, as the complete lack of pretenc’e presents the words in their barest form, as close to artful stream of consciousness as one can get whilst retaining some musical form. Words go first, then the melody in which they are sung, then the careful instrumentation of acoustic guitar, piano and others. The nuanced musicality of this album is something to be admired. You won’t necessarily find yourself belting it’s tracks out on a drunken night out or anything, but it’s something that stays and haunts in the private moments, its simplicity and straightforwardness crumbling upon and coating you word by word, its reality inescapable. (AS) (LISTEN)