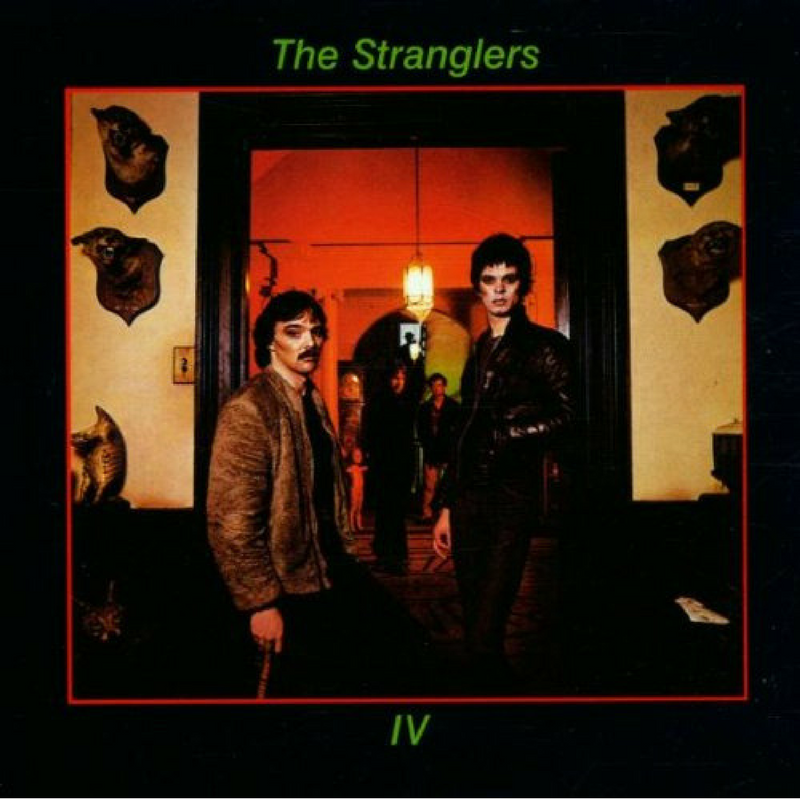 Let’s time-travel back to 1977 (as if we haven’t ventured there enough already). The UK punk scene had detonated, Bowie was breaking the laws of music with Low and Kraftwerk were transforming musical landscapes with Trans-Europe Express. This review focuses on the first phenomenon but do check out this publication’s classic album reviews for the two latter.

So: the glorious summer of British punk. Provocative adolescence as well as abnormal amounts of saliva being distributed amongst crowds at live shows was rife in 1977 in the UK. The fashion: multiple body piercings, torn clothing, safety pins, radical hairstyling, and anything else anti-societal that would piss off your typical member of the public. In terms of music, ‘77 was of course the big year for punk debuts: The Pistols released the colossal Never Mind The Bollocks…; The Damned and The Clash released their monumental self-titled debuts; and Television released the groundbreaking Marquee Moon. But there was another debut released that year which stood far apart from its contemporaries – Rattus Norvegicus by The Stranglers.

Arguably, The Stranglers’ ‘imperial phase’ (i.e. a phase of untouchable impact and quality) only lasts between ’77 and ’78 with three top-notch albums to their name – Rattus Norvegicus, No More Heroes and Black And White. Band members in the original line-up included Hugh Cornwell (lead vocals and guitar), JJ Burnel (lead vocals and bass), Jet Black (drums) and Dave Greenfield (keyboards) – all very talented musicians who produced terrific results with their instruments of choice. Afterwards, it was to be singles that get those all-important sales rather than albums. There are numerous examples of this that all draw to the same conclusion: ‘Always The Sun’ from Dreamtime, the infamous ‘Golden Brown’ from La Folie and ‘Skin Deep’ from Aural Sculpture – great singles from sub-standard albums.

Despite this, they achieved eight UK Top 10 albums and seven UK Top 10 singles during the so-called Cornwell era. As for the ‘90s, Cornwell had gone after their album 10 (1990) and the band became a five-piece with new vocalist Paul Roberts and guitarist John Ellis joining. The majority of their music from this era never charted and whatever did chart did so in a reluctant fashion. However, their bleakness evaporated as Norfolk Coast (2004) saw a re-emergence of what was once righteous. The follow-up albums, now back to a four-piece with Ellis and Roberts gone and Baz Warne on vocals and guitar, Suite XVI (2006) and Giants (2012) have also received generally positive reviews….and they are still going to this day despite their slightly dated sound.

Rattus Norvegicus is one of two brilliant albums that would be released in ’77 by the Guildford quartet with No More Heroes being the other. The addition of Greenfield’s quaintly Parisian keyboards directed The Stranglers’ sound away from the dominant power chord mojo that many punk bands opted for. But it was also the band’s somewhat controversial song content and Burnel’s distinctively thick bass tone that further segregated them into their own realm of punk. They rewrote the genre’s definition into something unprecedented as they incorporated instrumentations from art and gothic rock. Burnel once said that “I would like to think we were more ‘punk plus’ and then some.”

The Stranglers first turned heads during the short-lived ‘pub rock’ scene in the mid-‘70s that spat on the idea of sell-out stadium shows – they were for the likes of prog rock elitists. Other bands like Dr. Feelgood (the biggest influence on the band) and Eddie & The Hot Rods evolved from this movement and arguably punk itself may not have existed without it. Whilst touring with American punk progenitors Ramones and Patti Smith in late ’76, even more heads started turning and a sharp increase in popularity came about.

On the downside, the media started raining on their parade mainly due to their supposedly sexist, racist and crude lyrics and behaviour. Prior to their signing with their first label United Artists in late ‘76, The Stranglers caused major controversy with a graphic poster of a Boston Strangler victim that was used to advertise their gigs at the time (and was also used on the cover for the single Nice And Sleazy). It wasn’t unusual for a Stranglers gig to consist of a fist fight, a run-in with the media and some on several occasions, jail sentences. Burnel is guilty of harming music journalists and when touring in Australia, he also smashed his bass guitar over a fan who was repeatedly spitting at him. The band’s confrontational notoriety conveyed the message that they were not taking shit from anyone. The Stranglers often made the Pistols seem like well-behaved, grade A* Etonian students.

The beautiful irony of all of this is that these undesirable qualities is what made their debut so successful and it soared blissfully to the #4 spot in the UK (although, looking back, could have probably edged its way higher) and spent a total of 34 weeks in the chart, making it one of the highest-selling albums that originated from first-wave British punk. Later that year, No More Heroes deservedly took the #2 spot.

Rattus Norvegicus is an album that gets better and better from every listen and its unparalleled originality meant that The Stranglers could thrive and reduce fellow artists to a spec in the rear-view mirror. The closest we get to hearing a straight-up, no-nonsense ‘punk’ song is ‘London Lady’ as Cornwell dishes a captivating guitar melody which is thrusted by Burnel’s frenzied bassline. The song is based on a contemporary female journalist that reflects on an amalgamation of women that the band were meeting at the time. It’s here and on several songs on this album that women are referenced.

‘Princess On The Streets’ seems to interpret Burnel’s ex-girlfriend, who he called ‘Choosey Susie’, as a sort of femme-fatale character judging by “She’s no lady / She’ll stab in the back.” The song comprises of swirling keyboard progressions and depressed, but passionate vocals, that fits the context of heartbreak very well. ‘Ugly’ is where Burnel rants about sexy gold-diggers and the whole concept of rich but distastefully ugly men having relationships with this kind of women being preposterous. When Burnel says “ugly”, he “don’t mean rough-looking”, he means “hideous.” The use of what sounds like a flying UFO sound, in one segment of the song, resonates very well with the message of the song as the whole situation being, in Burnel’s mind, alien-like.

The opening track ‘Sometimes’ sets the album in motion with Cornwell fighting with his girlfriend at the time. The vivid and rather violent lyricism (“Beat you honey ‘til you drop”) of this song isolated The Stranglers into their own fortress of predicaments with the media (particularly the feminist side) and society. Listeners also get to hear Burnel’s menacing bass tone, Greenfield’s reverberating keyboards, Black’s perpetual drumming and Cornwell’s epigrammatic guitar work (i.e. concise and amusing) for the first time.

Then we come to the curated classic and reggae-inspired ‘Peaches’, around which much of the aforementioned media outrage revolved. Smeared with smutty lyricism, a monstrously catchy bassline, and one of Greenfield’s greatest keyboard solos, ‘Peaches’ would be The Stranglers’ anthem until the birth of ‘Golden Brown’ that would notoriously rival the quintessential ‘God Save The Queen’ for the golden crown of controversy. It’s here where the band sank deeper into censorship where the BBC banned them from playing it on ‘Top of The Pops’ due to the lyrics. Conversely, the satire and humour was admired by so many because, at the end of the day, it was just music.

‘Peaches’ insinuates at the album’s finale ‘Down In The Sewer’. Like ‘Peaches’, this song is funny as hell but on the other hand, also one of their longest compositions to date as it’s nearly eight minutes long. The ‘Sewer’ refers to the city of London but Cornwell’s lyrics paint a rat-infested, stinking, littered, and plagued version of the beloved capital. The part concerning making “love to a water rat or two / And breed a family / They’ll be called the survivors” will tickle anyone’s funny-bone. The pentatonic guitar and bass melodies are obsessive, Black provides his usual superb drumming skills and Greenfield’s keyboards are as inebriating as they have been on the entirety of Rattus Norvegicus.

For a more sophisticated proposition, look no further than ‘Goodbye Toulouse’. The dreamy keyboards daze the listener before the waltzy 6/8 tempo instrumentation flashes in. The band took inspiration from the famous French physician Nostradamus who was known for making predictions about the planet’s future. One such prediction involved a catastrophic explosion in Toulouse linked, by the band, to a nuclear power plant. As for ‘Hanging Around’, which talks about the contrast of London pubs that the band played at, and ‘(Get A) Grip (On Yourself)’, that encircles the rock’n’roll lifestyle, the listener hears the same marvellous ‘Norvegicus’ recipe. There’s not much else one can say about this idiosyncratic masterpiece.

Although bands who have been influenced by The Stranglers may have not have taken away their rambunctious, boisterous conduct, they most certainly revelled themselves in their early works with Rattus Norvegicus debatably being the best. Despite them not being befriended by their peers or the media, their sleazy, cynical, and volatile debut was a triumphant step forward in revolutionizing punk rock and has become an all-time staple in British music.

Listen to Rattus Norvegicus here via Spotify, and tell us what you think below!