CULT ’90s: The Orb – ‘The Orb’s Adventures Beyond The Ultraworld’ 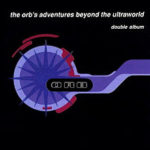 Marking pretty much the precise point at which dance music became epic, Alex Paterson turned an on-off DJing gig into a fully-fledged project with The Orb’s first studio album after years of EPs and singles. Sprawling over nearly two hours, The Orb’s Adventures Beyond The Ultraworld certainly doesn’t short change on the promise of its title. A continuous, progressive composition of ten tracks over four sections (‘Earth Orbit’, ‘Lunar Orbit’, ‘Ultraworld Probe’ and ‘Ultraworld’), the album and its signature song ‘Little Fluffy Clouds’ did an awful lot to change the concept of what dance music could sound like, particularly in terms of mainstream perceptions.

The concepts of extended dancefloor remixes and sampling had of course been around for a long time, but there was something playfully subversive, eccentric and quintessentially English about what Paterson introduced with his music. The Orb started life in the rave scene, catering to ecstasy casualties in the chillout room at Paul Oakenfold’s ‘Land of Oz’ nights at Heaven in the late ‘80s. Quickly becoming celebrated for playing ambient, percussion-free sets that lasted for several hours, Paterson worked with partner-in-crime Jimmy Cauty, whom he met through a mutual friend in Killing Joke’s bassist Youth and who found fleeting superstardom with pop terrorists The KLF.

Piling dozens of ‘found sounds’, field recordings and all manner of spoken-word samples on top of each other, and marrying those up with similarly researched visual materials projected on to the walls, The Orb’s sets threatened to overload the senses but, crucially, didn’t overstimulate those who came to hear them, wanting instead to lose themselves in a musical journey. This philosophy was carried over completely intact to Paterson’s first full studio effort – and truly, …Ultraworld is a journey like few others before or since.

Kicking off with The Orb’s most famous track ‘Little Fluffy Clouds’ which eventually became a UK Top 10 hit in 1993, nearly three years after its original release, it’s the closest to a commercial moment at under five minutes. The subject of litigation because of the uncleared central sample of pop star Rickie Lee Jones (with a noticeable cold!) talking about her childhood memories of the skies where she grew up in Arizona, it’s quirky disposition and rock-steady beat for many represents a kind of shorthand for the more ambient, comedown side of the rave scene.

Following this, Paterson spreads his wings and shows what he’s really capable of with a bigger canvas. The lush, Dionysian ambience of ‘Earth (Gaia)’, featuring Bible readings; the totally spaced-out dub feel of ‘Perpetual Dawn’; the gentle, loping breaks and beats of ‘Supernova At The End Of The Universe’ and ‘Into The Fourth Dimension’… all liberally sprinkled with an arsenal of snatched samples that could only have been the result of an incorrigible music nerd given access to vast archives of records.

Finally, after a full 90 minutes, the record arrives at its destination, a trip that began with cloud-gazing and meadows ending in the alien atmosphere of the 20-minute closer ‘A Huge Ever Growing Pulsating Brain That Rules From The Centre Of The Ultraworld’. Many mixes exist of this track, but the one on the album is a live mix with the central sample of Minnie Riperton’s ‘Lovin’ You’ fading in and out very fleetingly as a wealth of samples from sci-fi radio plays and natural sounds dive and swoop about to create a musical equivalent of a sensory deprivation chamber. Whereas ‘Little Fluffy Clouds’ summed up a wider scene, ‘A Huge Ever Growing…’ perhaps sums up Paterson’s sensibilities best.

There’s something of the punk sensibility in Paterson’s approach to the arrangement, with the sense of a lot of things going on at the same time (multiple samples rubbing up against each other at the same time) but, paradoxically, a sparseness in terms of the deployment of those same samples so that it never feels as if he’s labouring the point. Consequently, though the arrangements often very lengthy (all but one of the tracks are over 8 minutes long) it always feels very accessible and easy to listen to, and how much pleasure one derives from Ultraworld – and, indeed, The Orb’s entire discography – is entirely up to the listener.

The album’s influence is very obvious on artists like Boards Of Canada and DJ Shadow, who dealt in a similar vein of obscure, smudged field recordings and sound collages, but more widely on pretty much any electronic music artist that has pursued ambience and texture over commercial concerns. Modern artists like Gold Panda and Four Tet owe a debt to Paterson’s work, and although groups like Underworld and Orbital were more house-orientated, they also worked on a deeper, more instinctive level than other ‘big beat’ acts of the ‘90s.

Listen to The Orb’s Adventures Beyond The Ultraworld here, and tell us what you think below!