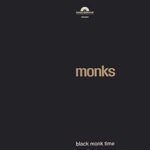 The story of The Monks would surely have been written for a movie script if it hadn’t actually happened in real life. You can picture it on the big screen: five American GIs stationed in Germany during the ‘60s pop revolution and the outbreak of the Vietnam War, form their own group out of frustration and boredom. Honing their basic garage rock sound into guttural, twisted but undeniably thrilling R&B-based missiles which bear virtually no resemblance to anything going on in pop music in 1966. All the while dressed in matching black outfits with rope ties and tonsures. However, the real story doesn’t have any Hollywood ending: The Monks broke up quickly, just months after their one and only album, Black Monk Time, was released at some point in March of that year and may as well have disappeared without a trace.

However, in the 50 years since, The Monks’ sole offering to the world has come to be regarded as a key developmental milestone in rock, with its raw guitar noise and stripped-down, thumping drum beats informing the sound of The Stooges and other psychedelic bands who made key proto-punk records in the following decade. The Fall’s eccentric genius Mark E Smith was clearly a fan, covering no fewer than four of their songs during his career. Just like The Velvet Underground & Nico, released the following year, Black Monk Time’s influence vastly outweighs its sales figures. Hardly anybody bought it, but those who did were inspired to form great bands of their own.

While they were a big deal in Germany, hungry for anything remotely resembling beat music and blown away by the raw nature of their sound, The Monks were almost completely ignored in their own country and in Britain, the two major markets for pop in the ‘60s. However, their geographical isolation turned out to be to their creative advantage – as Julian Cope pointed out, their distinctive sound would have been completely neutered by major label producers in America in the search for radio play. In a comparatively conservative and underdeveloped music industry, their furious, dissonant guitar noise and rhythmical catharsis could only have been the result of complete artistic freedom, left alone from interference by commercial interests.

Consequently, Black Monk Time resembles ‘60s pop but also sounds like nothing else around – not so much ahead of its time but out of time entirely. A delicious compound of exquisite joy and wild-eyed fury, built on Roger Johnston’s rigidly simple, bone-shaking combination of floor-toms, Larry Clark’s pulsating organ and a mixture of Gary Burger’s fuzzbox guitar stabs and Dave Day’s electric banjo ricocheting off each other, their sound was made whole by Burger’s bugged-out hollering. Hearing him declaim US foreign policy, having been a serving soldier, is strange and thrilling (“Why do you kill all those kids over there in Vietnam?”), and very few had a delivery style like his at that time.

Straight off the bat, The Monks’ identity is reinforced in the opening ‘Monk Time’, as Burger cries and gibbers his lyrics “you think like I think / you’re a monk, we’re all monks”, sealing the notion of the band as a gang (or, given their appearance, a kind of subversive cult). Mentioning Vietnam, A-bombs and James Bond, it’s a perfect encapsulation of the group’s philosophy as well as their sound. And, over the ensuing half an hour, The Monks clatter and bounce their way through a dozen short, brutally economical tracks with similar glee. There’s the “world is so worried” chant of the crude ‘Shut Up’; the primal pound and shake of ‘Oh, How To Do Now’; the rattling ‘Higgle-Dy-Piggle-Dy’ with its wandering organ motif; the slithery, Bo Diddley feel of ‘I Hate You’; the utterly insane build-and-drop of the onomatopoeic ‘Blast Off!’…

Truly, there are so many beautifully simple and gracefully executed highlights it makes you marvel at how The Monks could have gone so totally under the radar during their heyday. Perhaps the sixties wasn’t the greatest decade after all, if such a delight could have escaped everybody’s attention? The razor-sharp denunciation of President Lyndon B. Johnson on ‘Complication’, with Johnston martialling the group with harsh drum fills as Burger accusingly chants “people march / to their death for you”, was the closest thing their label was prepared to take a chance on as a single.

Slightly more conventional was catchy yet throwaway ‘We Do Wie Du’, the preppy ‘That’s My Girl’, or the poppy ‘Love Came Tumblin’ Down’, a breezy yet undeniably stunted attempt at contemporary beat music. But these more normalised moments don’t detract from the record – rather, they demonstrate the group’s range. Everything sounds reckless and purely instinctive, but the group was absolutely tight and fearsomely well-practised. There’s practically no embellishment or improvisation, drawing the obvious parallels with the ethos of punk when Black Monk Time was later rediscovered. At a point in time where mainstream guitar-based pop acts were making more ambitious and complicated music, The Monks were joyously anachronistic, ten years ahead of the punk era when the zeitgeist was rediscover the base elements of rock’n’roll.

But it really wasn’t their time at all. Less than a year after it was released, The Monks split up, reportedly after disagreeing over a possible tour of Vietnam, and as a result their entire legacy amounts to barely more than one side of a vinyl record. But gradually, its tribalistic, brazen and iconoclastic spirit was rediscovered by increasing numbers of artists in the ‘70s and ‘80s, and a small reunion was organised in 1999 and a tribute album, Silver Monk Time, came out in 2004. But Black Monk Time still ranks as one of the most criminally unknown masterpieces in pop history. Even if you can’t get on board with the ultra-economical chassis of the music, you can still enjoy it as a thoroughly unique time-piece, an enthralling vision of an alternate universe for rock’n’roll if the major labels hadn’t gotten involved.

Listen to Black Monk Time here, and tell us what you think below!