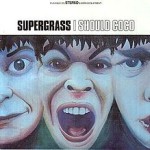 Front cover of ‘I Should Coco’

I Should Coco, the first album by Oxford three-piece Supergrass, is not only one of the crown jewels of the Britpop era but is usually thought of as one of the most deliriously fun debuts in pop history. Seriously, without listening to the album, just think of all its joyous moments: ‘Caught By The Fuzz’, ‘Strange Ones’, ‘Mansize Rooster’, and ‘Alright’… and you’re grinning already, aren’t you? Revisited twenty years later, two things stand out on I Should Coco. Firstly, the strength of Gaz Coombes’ pop songwriting abilities, already so sharp at such a young age (the band were barely out of their teens by 1995). Secondly, the shades of dark lingering underneath the album’s surface. Though they dispatch thirteen songs at the kind of breakneck speed that only the energy and impudence of youth can fuel, there’s much more to I Should Coco than the two-dimensionality that such a singular approach might suggest.

It’s an aspect of their songwriting that would be explored in much more detail later on in their career, but we get a really good look at an embryonic version of their darker side on six-minute penultimate track ‘Sofa (Of My Lethargy)’, a hymn of self-beration, and the louche blues of ‘Time’. For the majority of the record, though, Supergrass rarely let cynicism infect their endearingly wide-eyed take on British guitar pop music. For the entire first half of I Should Coco, from the opener ‘I’d Like To Know’ through to its twin song ‘Strange Ones’, Coombes and his bandmates Danny Goffey and Mick Quinn deliver precision-targeted pop missiles. The classic single ‘Caught By The Fuzz’, a story of a naïve youngster in trouble with the police over drugs with its metaphor of the world of responsibility and authority bursting the bubble of innocence and abandon, is one of the album’s two major high points, absolutely fizzing with punk-pop energy.

This delirium continues through the glam-rock stomp of ‘Mansize Rooster’, with its chunky piano power chords, the vaguely grungey ‘Lose It’ and the ‘60s pop throwback ‘Lenny’. After the red herring pianos at the start of side 2, ‘Sitting Up Straight’ picks up the pace once more with a lovingly shambolic punk impression, followed by the daft helium vocals on ‘We’re Not Supposed To’. Coombes’ yearning, minor-key vocals on the otherwise spry ‘She’s So Loose’ are about as downcast as the album gets. After ‘Time’ and the perfectly crafted ‘Sofa (Of My Lethargy)’, the back-to-back duo of laid-back moments mentioned above, we get the sub-2-minute vignette ‘Time To Go’, and that’s it. I Should Coco makes it entrance spectacularly and exits modestly, knowing not to undermine its charm by attempting to finish on a grand arena rock exit.

Without question, the album’s exuberant spirit is epitomised by ‘Alright’, by far the band’s best-known song. The major-minor key shift between bridge and chorus introduces a twinge of melancholia amid the positivity, and it seems to acknowledge the fleeting nature of youth even as it celebrates it. While that may be the standout track for the uninitiated fan, I Should Coco burns with the same spirit more or less throughout. The whole record is accomplished but still has the buzz of being new to the music industry. There’s nothing you could add or take away to make this particular type of debut album better.

In addition to its chart-topping success – the only album of their career to reach to summit of the UK charts – I Should Coco lapped up a great deal of praise by a music press now fully signed up to the concept of Britpop. It is, however, one of the records from this period that still stands up today. The likes of Elastica and Garbage, though they were well-received at the time, somehow don’t shine with the same lustre two decades later. It earned Supergrass a reputation as cartoonish, fun-loving rogues like The Monkees, hit-makers upon whom you could depend to churn out fantastic singles on a conveyor belt. But that reputation unfairly masks the quality of their studio albums, which were every bit as interesting.

Listen to I Should Coco here!