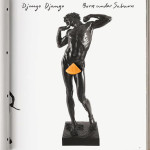 Front cover of ‘Born Under Saturn’

Born Under Saturn is Django Django’s follow up to their successful 2012 Mercury nominated debut record. Following on from The Beta Band and Syd Barrett-influenced pop on tracks including ‘Default’, they have travelled further in the same direction into a darker pop psychedelia. The group’s leader David Maclean’s brother is a member of The Beta Band, which partly explained the left-field yet curiously pop-oriented nature of their music. This record features more of an emphasis on new wave influences alongside catchy guitar hooks and funk inspired harmonies. It’s certainly not a perfect album and it may feel a little one paced for those familiar with their debut album, but that’s part of their shtick. However, it is a sophisticated progression in style.

Given the homemade and somewhat accidental and serendipitous nature of Django Django, they’re faced with the challenge of making something in much more contrived circumstances this time around. By and large, they succeed. The irresistable, elastic bass grooves and spaghetti western guitar licks are all present and correct, but this time they’re emphasising the latest electronic influences that were present before. The ethereal sounds of tracks such as ‘Found You’ and ‘Shake And Tremble’ perfectly illustrate the most interesting aspect of the band. There’s an element of playfulness in genre with a throwback to ‘50s rock and roll on the latter mentioned track. Space-age beeps perfectly accompany syncopated rhythm patterns throughout the vast majority, and this works particularly well on the darkwave ‘Shot Down’. There are distinct references to classic influences amidst all this, like The Beach Boys and Pink Floyd on ‘First Light’ and ‘Beginning To Fade’ respectively. It’s this willingness to reconcile both classic and niche influences from history that makes Django Django such a compelling band.

Born Under Saturn is a delightful record just like its predecessor, but it’s meticulous and highly disciplined in its experimental bent. On first listen it’s much the same as their debut, but with more technical thought and darker undertones, and it succeeds in keeping the band ahead of the curve. The only thing holding it back is that there is a slight nagging monotony as it would have been interesting to see them throw in a down-tempo track. But they’ve kept all the things that felt so righteous about Django Django, in the spirit of ‘if it ain’t broke don’t fix it’, and made a handful of necessary changes to the window-dressing. (7/10)

Listen to Born Under Saturn here!