REVIEW: Yo La Tengo – ‘Stuff Like That There’ (Matador) 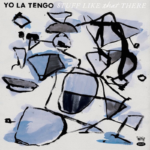 Following a whole quarter of a century on from their 1990 acoustic covers album Fakebook, Yo La Tengo’s latest release sees a return to the concept of influence with another collection of classics alongside a bunch of their own material in light of their 30th anniversary. Stuff Like That There, which takes its name from a song first recorded by Betty Dutton in 1944, sees a mixtape-style curation featuring covers of artists as diverse as The Cure, The Parliaments and The Lovin’ Spoonful.

Album opener ‘My Heart’s Not In It’ is a cover of an obscure 1964 single by Darlene McRea and sets the tone for the rest of the record. Yo La Tengo’s own track ‘Rickety’, follows with a semi-acoustic hazy psychedelic-folk combination. The American acoustic classic ‘I’m So Lonesome I Could Cry’ and ‘All Your Secrets’ are stand outs both vocally and instrumentally. Georgia Hubley’s vocals lend themselves perfectly to the Hank Williams class in particular and drawn comparisons to Belle & Sebastian.

The airy cover of The Cure’s ‘Friday I’m In Love’ provides respite to the ‘American classic covers’ feel to the record. Their interpretation of the track is, as you would expect, very twee and for UK audiences it would be no surprise to hear this version on a future TV commercial (probably for a smartphone). YLT cover their own song, ‘The Ballad Of Red Buckets’ from their classic 1995 album Electr-O-Pura. Whilst it doesn’t have the same atmosphere as the original, they manage to spin an interesting, Pentangle-style guitar harmonic which gives it a moody dynamic.

‘I Can Feel The Ice Melting’ by The Parliaments and ‘Somebody’s In Love’ by Sun Ra are both turned into dreamy, acoustic doo-wop harmonies filled with a dose of twee-ness. It’s a pretty fun take on how to genre-hop, but any long time Yo La Tengo fan might be more taken with their original tracks.

While overall the album is easy listening and gracefully spans decades of classic hits and indie curios, it is very similar in style and concept to the Fakebook material from the ‘90s, and probably stands as one of the least essential YLT releases. The album is fairly one dimensional in style but its genre-hopping format allows Yo La Tengo to make these classics their own. (7/10)