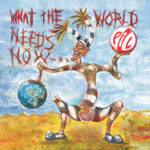 Front cover of ‘What The World Needs Now’

With less than a year to go until his 60th birthday, John Lydon must be pretty alarmed that there’s virtually nobody around in the British scene in 2015 who can call themselves an heir – or even a pretender – to his throne. Is it because no one else can be John Lydon, or that nobody wants to be? We’re not sure which possibility is more worrying. Lydon’s not completely immune from such careerist criticisms himself, obviously, as everybody who saw those butter adverts or the more recent Sex Pistols credit cards will testify. It is in this sorry state of affairs that Public Image Ltd., the band he consciously set up as an escape hatch from the crashing punk scene in 1978, releases its tenth studio album.

The one band that looks like it wants to be the ‘modern day Pistols’ is Sleaford Mods, whose singer Jason Williamson’s foam-flecked ranting style Lydon occasionally attempts to echo here, making What The World Needs Now an odd case of a singer being influenced by an artist he himself is partly responsible for in terms of musical lineage. Opener ‘Double Trouble’ opens the set in pretty rude health, with Lydon delivering a Sleafords-esque sneer “what, you fucking nagging again?” over a jagged, two-note guitar riff and an attack-mode rhythm. Rhyming “Domestos” with “domestic bliss” is a bit dubious, but it shows that Lydon has no intention of fading away into the twilight of his career. ‘Know Now’ follows and does even better on that front, seeing him satirise the back-biting of the music industry (“don’t want to know you / don’t need to know you”) in the same wild-eyed, indignant way he used to.

However, despite a promising start, things quickly descend into mediocrity or cringing self-parody. ‘C’est La Vie’ – no, not a B*Witched cover – is more or less completely inert, a slate-grey plod that lasts at least three minutes longer than it has to. The biggest crime is the half-baked, poorly realised rant against American cultural imperialism on ‘Bettie Page’, the kind of track that makes you sometimes wish that ageing punks didn’t try to grow old disgracefully. Other bits are intriguing but don’t work particularly well: the dub-country crossbreed ‘The One’ totters around for a bit but can’t really resolve its radically different elements. ‘Spice Of Choice’ and ‘Whole Life Time’ are totally phoned in, functional mid-album fare at best. The only mid-album moment of note is the over-8-minute ‘Big Blue Sky’, a wonderful chemical haze of dub and bloopy synths that gets increasingly paranoid as its running length elapses. Its presence amid so much third-rate material makes you think that, with a little bit more planning and thought, What The World Needs Now really could have been a late-career highlight for Lydon.

Things do finish strongly, however, with the last three tracks. ‘I’m Not Satisfied’ replicates that classic ‘Death Disco’ strut, with a strong, glassy riff by guitarist Lu Edmonds. This is followed by the malevolent industrial clanking of ‘Corporate’, one of the most sinister things PiL have released in years. Closing track ‘Shoom’ is a great piece of funky post-punk – “I’m always concrete / I came from the street / what the world needs now / is another… fuck off!” Lydon bellows entertainingly in self-reference to his reputation of forever sniping from the sidelines. What The World Needs Now may fail on as many occasions as it impresses, but the one thing that can’t possibly be denied is that, even at 59, Lydon still fucking cares enough to try. How many current stars can honestly say that? (6/10)

Listen to What The World Needs Now here!