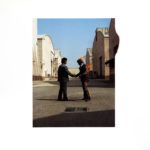 Front cover of ‘Wish You Were Here’

With their ninth album, Pink Floyd faced the conundrum that all truly massive artists have to confront when they’ve ridden the initial wave of their success – how to follow it up. To repeat oneself will usually attract critical fire and garners only a fraction of the sales; to do something radically different is to let down one’s fans or commit commercial suicide; in short, both critics and the public are unlikely to both be satisfied. In the Floyd’s case, relentless touring of The Dark Side Of The Moon (their sonically pioneering unit-shifter which is now believed to be the third highest-selling album ever worldwide) for 18 months had left them exhausted, and the band’s members alienated from each other and the machinations of the music industry.

It didn’t bode particularly well for the new record. Initially, Wish You Were Here did indeed receive mixed reviews, with many criticising the relative lack of fresh material. Only five tracks long – two of which are the epic ‘Shine On You Crazy Diamond’ cut roughly in half to bookend three much shorter tracks – and consisting mainly of songs that had been part of their live set in 1974, it was considered slightly uninspired. The group found things extremely difficult: bassist and songwriter Roger Waters remembered that “the only way I could retain interest in the project was to try to make the album relate to what was going on there and then: i.e. the face that no one was really looking each other in the eye, and that it was all very mechanical.” Quickly, however, this was revised to a consensus that it was a great follow-up to its globe-conquering predecessor, and one that finally exorcised that spectre of the group’s former leader Syd Barrett.

The album started life with the intended title of ‘Household Objects’, with the music entirely played on everyday domestic items, harking back to the kind of thing that Pink Floyd were doing in the ‘60s at the start of their career, with Waters in particular looking at it as way of breaking the cycle of touring and promotions in which The Dark Side Of The Moon had trapped them. Quickly realising this wasn’t a viable option, Waters transformed it into a loose concept album about personal alienation. Wish You Were Here reversed the focus of the anxiety and worry about the world that had characterised The Dark Side Of The Moon and turned it on themselves. Thematically, it was a follow-up of sorts: instead of exploring outer space, now they travelled inwards.

The crisp, cutting edge production that had helped make The Dark Side Of The Moon such a stunning success was relied upon again to render the slow, stately music of the new record as clearly as possible. But studio trickery is nothing without coherent musical ideas, and ‘Shine On You Crazy Diamond’ is arguably the most beautifully realised musical concept in the Floyd’s entire back catalogue. David Gilmour’s four-note guitar figure echoes beautifully, and when it first rings out of the speakers on the second segment, like ripples through water, it perfectly communicates the sense of distance, isolation and alienation that Waters was trying to convey – more so than any one lyrical moment on the rest of the record. Through its nine sections, it moves from a stately, funereal dirge through several mutations, taking in a kaleidoscope of cosmic jamming, brittle semi-funk, squealing sax and soulful backing singers.

‘…Diamond’ was a final, cathartic epitaph for Syd Barrett, their inspirational former leader who suffered a mental breakdown and withdrew to live a hermit-like existence during recording of Pink Floyd’s second album A Saucerful Of Secrets (1968), having epitomised their lysergically-tinged early work. (“Remember when you were young, you shone like the sun / Now there’s a look in your eyes, like black holes in the sky”). The sad story of a dishevelled Barrett turning up in the Abbey Road Studios just as the group was finishing the mix of the song itself would be one of those apocryphal legends if it wasn’t completely true. The sight of their former bandmate and leader – though it took Waters 45 minutes to realise that the overweight, bald and distressed looking man was in fact him – reduced many of the band to tears. He slipped out unnoticed later the same day, and none of the band saw him again until he died in 2006.

The nine sections of this 26-minute epic open and close Wish You Were Here, providing the bread in the sandwich of the album, with the middle three tracks providing the thematic ‘meat’ of the record. ‘Welcome To The Machine’ details the disillusionment that Waters was feeling, focussing in on an aspiring musician just starting out in the industry and set to shifting meter and time signatures. This is continued on ‘Have A Cigar’, featuring guest vocals from English folk hero Roy Harper. Its churning rock is played at a catatonically slow pace, adding to the sense of paranoia and bitterness, as Harper voices a bullshitting label executive promising the band the world, before adding ignorantly “by the way, which one’s Pink?”

Via a snippet of Tchaikovsky’s Fourth Symphony and the noise of car radio being retuned, this then gives way to the title track, which is the album’s second show-stopper and an enduring fan favourite. Waters’ evocative poetry with lyrics such as “So, so you think you can tell / heaven from Hell, blue skies from pain / can you tell a green field from a cold steel rail?” combine perfectly with Gilmour’s clean, acoustic guitar, as Richard Wright’s keyboards and synth chime in halfway through. Intended to evoke “one person sitting in the room playing guitar along with the radio”, according to Gilmour, its lyrics about “two lost souls swimming in a fish bowl” was a perfect metaphor for the band’s disintegrating relationship. Its most poignant performance came when Waters and Gilmour, estranged since 1983, joined Wright and drummer Nick Mason onstage at Live8 in 2005.

On Wish You Were Here, you can hear Pink Floyd doing what they do best – taking road-tested material and weaving it into pure magic in the studio, despite the widening distance between the band’s members at the time. In the middle of its vast, majestic sweep, the band are the smallest part of it, crushed insignificantly by the machinery of the industry against which they were railing. The record’s themes are made physical by the image on its front cover: a man being metaphorically burned by a business deal he’s completing. It may not be their most famous record, but it’s thought of by many Floyd fans as their best.

Listen to Wish You Were Here here!