REVIEW: The Arcs – ‘Yours, Dreamily’ (Nonesuch) 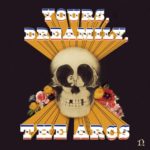 Front cover of ‘Yours, Dreamily’

Taking a (very) quick breather from his extremely busy schedule involving massive world tours with The Black Keys and production duties with the likes of Ray Lamontagne and Lana Del Rey, Dan Auerbach earlier this year announced a side project called The Arcs, with a specially assembled band of previous collaborators. Included in their number are The Shins player Richard Swift, bassist Nick Movshon, of Mark Ronson’s backing band, and session drummer-for-hire Homer Steinweiss. Free of the context of a brutally stripped down blues-rock duo, many will be looking forward to Yours, Dreamily as an opportunity for Auerbach to break out of the narrowly defined parameters within which he’s been working for over ten years. It does indeed show a different side to Auerbach, but the new, expanded sonic vistas open to him remain sadly underexplored in an album that doesn’t display a great deal in the way of imagination.

His style has always been retro, but Yours, Dreamily does away with any pretence of modernity whatsoever, containing absolutely no influences post-1976. Consisting of 14 short, unfussy yet disciplined productions, it sounds very much like a full band version of The Black Keys if they played classic soul as well as punky, choppy garage-rock. If you were to be especially cruel, you’d argue Auerbach was just trying to co-opt the ground already occupied by festival favourites Alabama Shakes. After a brief instrumental intro, ‘Outta My Mind’ gets straight down to business, photocopying the sturdy rhythmical framework of The Beatles’ ‘Taxman’ and doodling freely all over it with shades of ‘60s pyschedelia. The slower, more reflective drone of ‘Put A Flower In Your Pocket’ is a highlight, with Auerbach’s high-pitched blues croon sighing “you may pretend they like you / but man’s best friend will bite you, just for fun”. ‘Nature’s Child’ and ‘Pistol Made Of Bones’ both sound like how Tame Impala might if Kevin Parker listened to Stax Records.

Though the album’s highlights could easily nestle alongside any Black Keys tracks, Yours, Dreamily sadly comes with an awful lot of musically interchangeable filler that sounds perfectly pleasant but doesn’t stick around in the memory afterwards at all. The themes of ‘Everything You Do (You Do For You)’, ‘Velvet Ditch’, ‘Come + Go’ are absolutely bog-standard, old-fashioned themes, usually ruing encounters with women. Probably understandable given Auerbach’s divorce proceedings, but all the lyrical tropes are extremely hackneyed and threadbare. Musically, it’s all very workmanlike and dependable, but there’s ultimately very little to write home about in what adds up to a missed opportunity for one of the most solidly reliable songwriters of the new millennium to show us a different side of himself. It seems that Auerbach can’t ever really switch off ‘work mode’, even when he’s doing stuff for fun, and Yours, Dreamily is therefore the album equivalent of the guy glued to his e-mail account on the beach. (4/10)

Listen to Yours, Dreamily here!