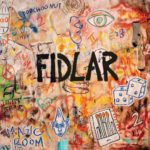 Front cover of ‘Too’

Too, the second album from L.A.-based FIDLAR feels like a concoction of every rock and roll cliché. Their debut record was a noisy depiction of the musician lifestyle. Alarming news recently surfaced of FIDLAR’s lead singer, Zac Carper, who had a crippling heroin habit due to a damaged childhood. Although the drugs and the chequered past have been toned down, their brand of garage rock blends indie rock sensibilities with the attitude and thrashy guitar riffs of NOFX and Less Than Jake.

Their juvenile humour almost pays homage to Blink-182 on the opening track ‘40oz On Repeat’. Following tracks ‘Punks’ and ‘West Coast’ are full of rock and roll swagger. They also jump from a heavy bass led riff to a lighter pop tone which is helped by an arrangement led production style. ‘Drone’ and ‘Hey Johnny’ are the records strengths and really help to pull up the thrashy tracks from the more honest and downbeat efforts. They are potentially FIDLAR’s best work to date and they feel like the most natural continuation in style from their debut record. The huge guitar riffs are particularly impressive and almost tail off into a Thee Oh Sees-style fuzz pop arrangement.

Too is loud, energetic but a little hit-and-miss in parts. Filler tracks including ‘Sober’ and ‘Overdose’ feel slightly lost, but it is a revealing insight into the mind and struggles of the lead singer and his relationship with the rest of his band. It will be interesting to see how the band progress from this record. (6/10)

Listen to Too here!