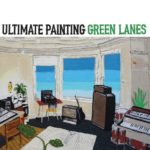 The second release from Mazes frontman Jack Cooper and James Hoare of Veronica Falls, who record as Ultimate Painting, is very familiar in sound and style to their 2014 self-titled debut. Taking their cues from impeccable indie influences ranging from Pavement to The Velvet Underground, their sound took shape after an elderly neighbour complained when recording sessions got too loud and forced the duo to reshape their visions and make a more melancholy soundscape. Authentically wiry guitar lines became the order of the day, and this led to a well-received self-titled debut less than twelve months ago.

The first single from Green Lanes, called ‘Break The Chain’, is a vocally meandering track with intricate guitar riffs and gives a stylistic nod to Stephen Malkmus of Pavement. ‘Kodiak’ is a natural carry-on from their debut with bendy guitar harmonies and a dream-like foot tapping chorus. Their signature chord progressions give them a natural comparison to fellow contemporaries Real Estate. ‘(I’ve Got The) Sanctioned Blues’ has a stunning vocal and harmony recall and response which makes it one of the standout tracks on the record. Over the course of the record the pace doesn’t drop with ‘Two From The Vault’ and ‘Woken By Noises’. ‘Sweet Chris’ has the perfect balance between tidy nostalgia filled riffs and delicate vocals. It doesn’t kick on into the next gear though.

The watered down approach by Ultimate Painting won’t be to every listener’s taste, but if you are familiar with the duo then this is the perfect side-project to their heavier work, a complement to (rather than an extension of) their day jobs. But unlike their debut, Green Lanes passes the listener by and is a throwback to psychedelic nostalgia that offers very little in the way of original input. However, it is obvious that the duo are having fun and have set out to appease their own creative ambitions rather than their audience’s. (5/10)