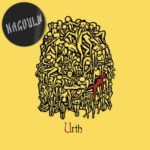 Nottingham three-piece Kagoule are the latest serious contenders to emerge from a burgeoning scene in that city. While Jake Bugg rocketed to superstardom seemingly overnight, Sleaford Mods have quietly grown a fanbase over the course of eight years. Vocalist and guitarist Cai Burns, bassist Lucy Hatter and drummer Lawrence English are doing things with a middle approach of those two success stories, spending two years building an impeccable reputation as a live band and hoping to use that as a launchpad. Judging by their debut album Urth, they could easily find crossover success. Though they’re signed to local imprint Earache, an ostensibly metal label, many of Kagoule’s characteristics are distinctly indie-orientated, in the same kind of way as fellow Midlanders God Damn’s accomplished Vultures earlier in 2015.

Their volume may mark them out as quite British, gothic and dark, yet the angular shapes thrown by their spiky, serrated guitars puts them in distinctly American lineage of college rock and introspective, shy indie.Produced by Pete Fletcher, an assistant to British rock producer du jour Ross Orton, Urth has a gritty, distinctive sound. English’s drums are the main driving force in the mix, instigating constant rhythmical changes in the likes of recent single ‘Adjust The Way’, whose guitars rear up insistently throughout. Opener ‘Gush’ does much the same thing, with its metallic guitars screeching over uneven, constantly shifting ground. This characteristic is prominent throughout the record: the seasick sway of the Pumpkins-esque ‘Open Mouth’; the tumbling drums of ‘It Knows It’ and the spectacularly fragmented internal monologue of Burns’ lyrics about old friends on ‘Mike’ are the best examples.

Kagoule’s greatest achievement is its lack of predictability, something that has plagued an awful lot of British guitar debuts in the recent past. The trio will start off with one idea, and travel through many others to arrive back at the same place, doubling back on themselves and tying themselves in knots with a kind of twisted internal logic that is the hallmark of truly great indie records. Choruses often ambush you, but you try to remember back to when the song changed and you can’t quite place it. Single ‘Glue’ somehow manages to sound both titanium-heavy and helium-light at the same time; ‘Damp Sound’ sounds like the math-rock of Foals if it were covered by Smashing Pumpkins circa Adore; the strangely moving highlight ‘Made Of Concrete’ pits Lucy Hatter’s turn on lead vocals, with lyrics of longing and lust, over jagged guitars and expertly maintained quiet/loud dynamics that hark back to the finest alternative rock of the early ‘90s.

It’s perfectly easy to sound like Pixies, Sebadoh or Sonic Youth and make your very own tribute to that glorious era – all you need is a halfway decent producer and you could easily pass for any number of short-lived Boston, Washington D.C. or Seattle groups from around that time. It takes real craftsmanship to take that template and turn into something as immediately, recognisably fantastic as Urth. If all new British groups could approach their debuts with half the commitment and originality that Burns, Hatter and English do here, then our indie scene would be a hell of a lot healthier. With their honest, idiosyncratic style of songwriting, their willingness to contribute something new and – most importantly – their love of a razor-sharp hook, Kagoule have made one of the best British debut records of 2015, with the kind of immediacy to make you fall in love on first listen yet deep enough to reward repeated listens. (8/10)