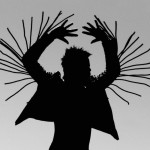 Twin Shadow is the recording name of Dominican-born American vocalist George Lewis Jr. For those unfamiliar with his music, Lewis’ voice is that of the DJ for the Grand Theft Auto V radio station ‘Radio Mirror Park’. His previous two albums Forget (2010) and Confess (2012) have steadily gained him plaudits and warm critical notices, landing him a support slot on Florence + The Machine’s U.S. tour in 2011. New record Eclipse sees him make the big jump to major label artistry, departing the impeccable indie 4AD for Warner Bros. a little over a year ago. His brand of intelligent, minimalist pop-soul will have to make an impact in a pretty crowded marketplace for this kind of music.

Just like his previous albums, the immediate impression you get from Eclipse is that Lewis is locked in a state of permanent twilight. The whole thing seems to take place on some darkened landscape as our protagonist goes on some doomed quest for lasting romance, the music seeping into the lyrics as Lewis seems unable to see love outside of a context of the inevitability of losing it. The almost Morrissey-esque intensity of his delivery is the star asset throughout the record, at times threatening to (dare we say it?) eclipse (yeah we did!) the music. You can imagine the likes of soulful opener ‘Flatliners’ or the big-hearted anthem ‘To The Top’ (released damn near a year ago) being covered by Sam Smith or Hurts, so accessible is some of the material here.

The hook-laden ‘When The Lights Turn Out’ has ‘radio hit’ written all over it, as Lewis lays it all on the line with lyrics like “you make something so right so wrong” over U2-esque guitar histrionics. He martyrs himself on the skyscraping ‘Half Life’ (“do you know why I suffer?”), and this tendency can become a bit oppressive after a while. ‘Old Love / New Love’ is a club banger worthy of early Daft Punk but with soulful vocals on top. Fortunately, for the sake of variation, Twin Shadow can do quieter moments as well as the Imagine Dragons-style sonic fireworks displays. The intimate title track grows more compelling with each listen; the duet ‘Alone’ with Lily Elise is a striking trip-hop influenced ballad; and the scattershot beats of ‘I’m Ready’ shows plenty of willingness to get to grips with different styles.

Everything on Eclipse is set to ‘minimalist’ and ‘dramatic’, as Lewis goes all out to bring a pretty singular vision to life. While this is frequently compelling, and repeated listens make it easy to tease the nuances from it, unfortunately there is an overabundance of artists out there doing pretty much the same thing. Furthermore, as a character, Lewis is pretty two-dimensional and sticks rigidly to the same lyrical themes and vocal range throughout. For all its undeniable surface quality, the fear is that Eclipse is musically not quite distinctive enough for Lewis to make more than a fleeting impression. (7/10)