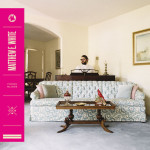 Singer, songwriter and producer Matthew E White is back with his second record following on from his successful and critically acclaimed debut Big Inner. His big beard and long hair, as well as his distinctive soulful psychedelic melodies, have developed in Fresh Blood with a more playful style, unlike his debut which was heavier and less sensitive.

‘Rock and Roll Is Cold’ is a simplistic kick-back song, like a hipster version of Jack Johnson. It wouldn’t be much of a surprise to be hearing it on multiple TV ads promoting music products. The piano melody and simplistic lyrics give away his obvious frustrations with the current state of the music industry. Complete with backing singers, this is by far the stand-out track and demonstrates White’s ear for a pop gem.

‘Take Care My Baby’ and ‘Golden Robes’ evoke the styles of Curtis Mayfield and Kevin Rowland with a combination of building horns and soothing vocals. By contrast, ‘Holy Moly’ takes the record into darker places with a simplistic piano melody alongside the bleak lyrics from White. As the track motors on it reveals a soul-tinged ballad with an impressive climax.

Although significantly different to his debut with little focus on acoustic psychedelia, Fresh Blood doesn’t quite hit the spot by comparison due to a loss of momentum. There is an impressive mix-and-match of tracks with differing moods, but it doesn’t quite manage to grab the listener’s attention for a full sitting which this style really requires. (6/10)