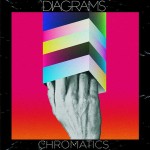 Formerly of English experimental group Tuung, Sam Genders’ latest release Chromatics is his second under the name of Diagrams. Having received a considerable amount of decent write-ups for his 2012 effort Black Light, his new record couples a similar synth-pop sound with a folkier tendency closer to his work with Tuung.

The instrumental underpinnings are perfectly accompanied by Genders’ throughout the record, providing an experimental journey through the distinctive style of the frontman. He’s also brought in some collaborators to help out, including Smoke Fairies on backing vocals as well as Leo Abrahams on production duties. ‘Dirty Broken Bliss’ and ‘Shapes’ are particular stand-out tracks, with reference to the darker moments of Pink Floyd and the spacious sounds of early Arcade Fire. His eerie vocals drive the record along although some of the vocal melodies are a little less compelling.

Chromatics is a great listen to accompany the great thawing of spring and the run-up to summer. The darker moments on the record are perfectly partnered with the lighter ones taking the listener on an inspired journey. However, some die-hard fans of Genders’ previous works may find this record a bit safe and cautious, but overall it doesn’t disappoint. (6/10)