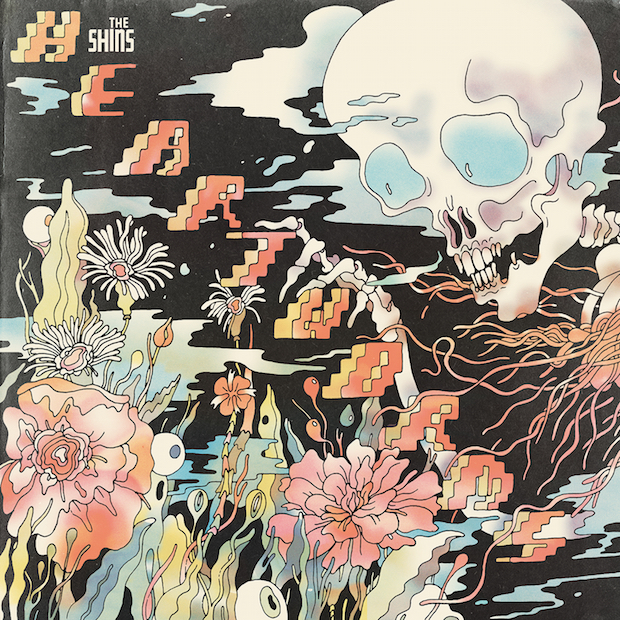 Reanimating The Shins after a five-year hiatus with a whole new backing band, James Mercer’s ‘Heartworms’ is sometimes too forced to match up to previous glories.

Heartworms brings James Mercer back to the limelight, with his husk of what was once The Shins after a five-year hiatus. Port Of Morrow, the band’s 2012 album and their last release came after the purge of drummer Jesse Sandoval, keyboard player Marty Crandall and bassist Dave Hernandez. As it often goes, this switch up brought about a distinctive change to the millennial indie band’s direction and image; Port Of Morrow was far from welcomed by fans of their former reclusive, angst ridden sound. There is speculation as to whether producer Greg Kurstin, renowned in the industry for success with Adele, Kelly Clarkson and Sia, might have had some part to play in the veritable mess.

It’s The Shins’ first album to be self-produced and recorded since the release of Oh, Inverted World! in 2001. The album is less rich in palette than their former albums, and carries some commercial radio fit, wailing American pop choruses. That being said, Heartworms wholly retains the insanely tight yet effortless feel prevalent in so much of their greater previous albums, and interweaves a redeeming awkward spacey sound throughout. The production on the album is undeniably impressive, and Heartworms shows James Mercer to be a skilled technician with a wide sonic pallette, though the album is most juicy and palatable in instrumental sections, particularly when he isn’t wailing “Come back and touch my face, feel for fever in the night” all over the place.

The album kicks off with the head-bobbing, skipping down the street on a sunny day tune ‘Name For You’, the album’s first single. From here, the album’s downfall is that it doesn’t stop skipping or head-bobbing once in its 41 minute runtime, and it generally becomes pretty wearying just a few songs in. I enjoyed the album’s eccentric, electronic injection, especially on ‘Cherry Hearts’, though can’t give Heartworms too much more praise. There’s not enough respite from the incessant cheerfulness of the album to be entirely listenable – the smiles are too forced at times. (6/10)

Listen to Heartworms here via Spotify, and tell us what you think below!