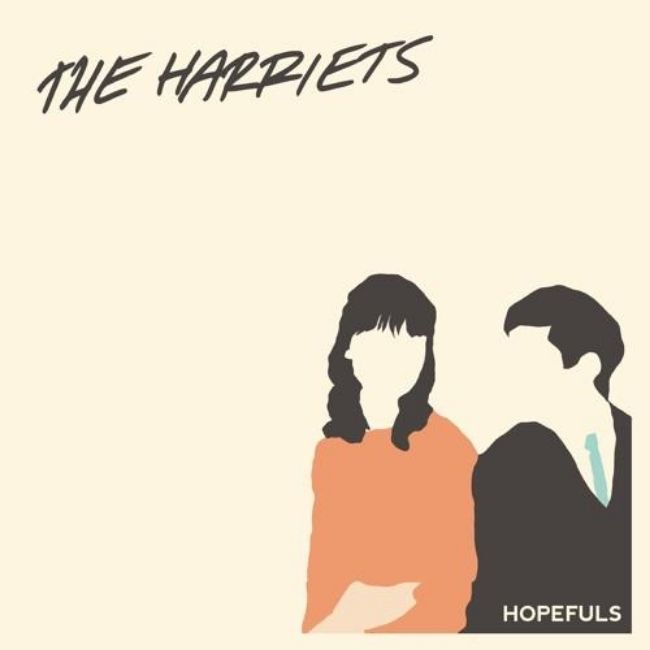 Encouraging early EPs and singles haven’t translated into more than a generic and mysteriously poor-sounding debut album from The Harriets.

The Harriets are an indie-pop band hailing from the great city of Leeds. Previous to their debut full-length release, Hopefuls, they had released a range of EPs and singles categorising them into the genre of indie-rock. These releases showcased similar sounds and vibes to that of the early Fratellis records, especially with songs like ‘Harriet Who?’ and ‘Harry’. Using a bigger artistic canvas for the first time has seen the band refine their sound, moving towards something a bit more dream pop-orientated whilst still maintaining elements of indie.

This album was recorded at home (as like all their previous releases), and seems to feel a lot smoother, more textured and less raw than the previous EPs and singles. It could almost pass off as a professionally recorded album in places, which immediately puts it well above previous releases if that’s a key factor for you. The addition of some keys, trumpets and organs really does add to their sound, without which Hopefuls may have felt like a bit of a step backwards.

Hopefuls is… okay. We’re not going to sit here and tell you The Harriets are the saviours of indie pop, or even that they’ve have tried something interesting and new. It’s very safe, middle of the road and a bit uninspiring. I quickly felt as if I’d heard all of the progressions and melodies a million times before, and I probably have. Within the first few minutes of the album, it seems that I have stumbled across a Libertines tribute band, trying to fuse elements of other celebrated bands like Madness (like in ‘Come Home’) to create that kind of fanbase that would just stand and nod their head muttering “These are okay aren’t they?” to each other. It’s essentially best suited to playing in a pub garden to a bunch of pissed middle-aged regulars, or soundtracking a cider advert.

The vocals, although working (mostly) well when the band is playing, really do not want to be inspected under a microscope. As long as the twin lead vocalists, Daniel Parker-Smith and Ben Schrodel, stay low in their respective registers they can keep it together, but any higher and everything starts to get a bit shaky. There are examples in ‘Trip To The Moon’ and ‘Fall Out Of Grace’ (to name a few), where they just fail to hit the notes and it baffles me that you could leave something in like that, especially when you are recording at home and can take as long as you like to get a decent take. The guitar solos in ‘Have Fun In Your Work Place’ and ‘Johnny’ also leave a lot to the imagination. Stumbling around the pentatonic before strumming on a few chords, struggling even to stay in time at moments seems to fall very short of the mark. It just doesn’t sound good, and that’s particularly confusing when so much care and attention has been put into other presentational aspects here.

Hopefuls isn’t a poor album, but it is certainly doesn’t showcase The Harriets at anywhere near their best, their live lo-fi charm failing to translate. The few interesting moments are negated by a lot of other poor moments in the album, or at least ones that struggle to become anything more than merely generic. (4/10) (Ali McCarthy)

Listen to Hopefuls by The Harriets here via Spotify, and tell us what you think below!