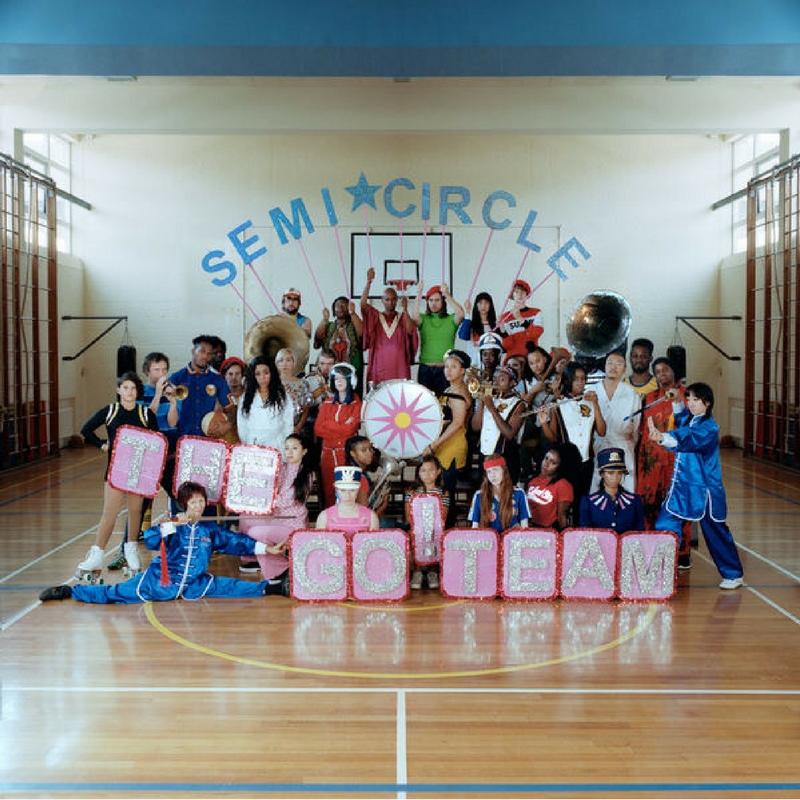 Re-energised in parts but flat and non-distinct in too many others, ‘Semicircle’ sees The Go! Team attempt to get back to basics.

Coming on like a friendlier, cuddlier version of The Avalanches’ densely swirling sample-delia, The Go! Team’s 2004 debut album Thunder, Lightning, Strike was one of the most distinctive artistic statements of the decade. Even in an era characterised by its plundering of the past for inspiration, it stood out from the pack in the context of its time, mimicking a bewildering array of styles and lifting snatches of samples from soul, funk, indie and rap. It became a minor, slow-burning sales hit off the back of the group’s signature single ‘Ladyflash’ being re-issued more times than was perhaps sensible.

Since then, the group’s key musical architect Ian Parton has stuck pretty closely to that established MO, unfortunately to dwindling commercial returns, and by 2011’s third album Rolling Blackouts the formula had become stale. As a result, Parton scaled The Go! Team project down to a solo endeavour for 2015’s solid but unremarkable The Scene Between. Seemingly no place, then, for The Go! Team in 2018?

No, as it turns out – analysed as pure escapism, fifth album Semicircle is pretty good fun and works perfectly functionally, if never really threatening to reach top gear. De-camping to Detroit after getting the inspiration to make marching bands the central plank of the new album’s sound, Parton worked with the city’s Youth Choir on a number of its tracks. At its best, he and his re-assembled band recapture the sense of reckless, artless but sincere abandon that’s an essential ingredient in all the best DIY music – in The Go! Team’s case, like a load of sugared-up pre-teens let loose in a studio with a dressing-up box, a half-full orchestra of random instruments and some samplers.

That youthful abandon is immediately evident on ‘Mayday’, which shows that the group’s cartoon/cheerleader schtick is still intact, as it is on the sweet Jackson 5-esque vocal delivery on ‘Chain Link Fence’. Particular highlights come in the Phil Spector-esque production of ‘The Answer’s No – Now What’s The Question?’, with dashes of Christmassy bells, and the irresistibly funky horns and marching band stomp of ‘All The Way Live’. The Go! Team’s original frontwoman Ninja, a charismatic public face that Parton has missed in the recent past, returns on ‘She’s Got Guns’ to deliver an old-skool rap with her trademark, cattish sneer. It’s brilliant, but an all-too-brief cameo that ultimately only serves to remind the listener of the potency of Thunder, Lightning, Strike.

However, there are rather too many moments of insubstantial fluff on Semicircle to allow it to truly stand alongside either of The Go! Team’s first two albums. The idea of getting the aforementioned youth choir to shout out their astrological signs on ‘Semicircle Song’ is annoying rather than quaint; ‘Chico’s Radical Decade’ most certainly is not; while most of the last four tracks suffer from listener fatigue down to the overuse of the same idea.

On Semicircle, Parton and The Go! Team sound re-energised and more like themselves than they have done in the decade since 2007’s Proof Of Youth. A return to the glory days it is not, and whether there’s any long-term future for them is a different question, but the trashy, playground-chant psychedelia offered up in places is an ideal tonic for the stresses of 2018. (5/10) (Ed Biggs)

Listen to Semicircle by The Go! Team here via Spotify, and tell us what you think below!