REVIEW : The Decemberists – ‘What A Terrible World, What A Beautiful World’ (Capitol) 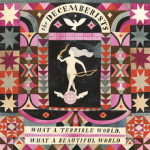 Front cover of ‘What A Terrible World, What A Beautiful World’

Portland’s The Decemberists scored a surprise Number 1 hit on the US Billboard 200 with their last album The King Is Dead almost exactly three years ago. Granted, it was during the traditionally slow sales month of January, but it was gratifying to see this intelligent and passionate indie group gradually gaining momentum and recognition in the decade since their formation, reflected in a Grammy nomination for ‘Best Rock Song’ for the album’s lead single ‘Down By The Water’. Band leader Colin Meloy’s penchant for florid and poetic language, in which he might spend one hundred words expressing something that most bands would in six, combined well with the British folk-revivalist tendencies of the music, but The King Is Dead saw The Decemberists head into more traditional American rock territory. This is something the group builds upon with its seventh album What A Terrible World, What A Beautiful World, reuniting with long-time producer Tucker Martine.

Meloy’s miserablist leanings come to the fore with sprawling opener ‘The Singer Addresses His Audience’, a quiet meditation on celebrity and culture, before the group locks into a disciplined streak of seven consecutive belters. ‘Cavalry Captain’ and ‘The Wrong Year’ are mature pop anthems crafted from beautiful brass and strings, and on lead single ‘Make You Better’ and ‘Philomena’ they use rock dynamics to achieve the same effect. ‘Lake Song’ is a delicately poised piece of chamber pop, pretty without being indulgent, and ‘Carolina Law’ is a well-observed early ‘70s Dylan pastiche. Meloy, who describes his teenage self as “terminally fey”, displays his unusual songwriting knack by using Anglicisms like “stand-up gent” in ‘Easy Come, Easy Go’, and his smooth but soulful voice is always the centre of attention despite the perfectly crafted musical surroundings.

The album lets itself down slightly in its second half, when The Decembrists seem to lose themselves in their ideas, causing the tracks to sound a little underdone and unfinished. ‘Anti-Summersong’ is a perfunctory country effort replete with fiddles and banjos, but focusses on form over content. Meloy puts a little too much pressure on his vocals as the prime carrier of melody in the group, on the forgettable back-to-back duo of ‘Mistral’ and ‘12/17/12’. Some fans may find WATW,WABW a little inert in comparison to previous albums, and it’s debatably a couple of tracks too long, but it’s an undeniably solid effort nonetheless, and worth the asking price for the first eight tracks alone. (7/10)

Tags: Colin Meloy, review, The Decemberists, What A Terrible World What A Beautiful World