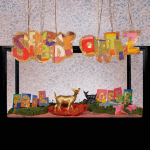 When Massachusetts native Sadie Dupuis first began Speedy Ortiz as a casual recording nom de plume four years ago, she can’t have presumed that the indie world would be anticipating her third album as much as this in 2015. After an internet release that year called The Death Of Speedy Ortiz, her group attracted the attention of the national rock press in 2013 with Major Arcana, the kind of album that restores one’s faith in the indie underground scene to throw up exciting new acts. With Foil Deer, Dupuis faces the possibility of some serious mainstream exposure if she keeps the critics purring. It’s exactly the kind of career arc that used to happen before internet hype started ruining the prospects of precocious young talent. Though Speedy Ortiz grew up in the age of Spotify, a great deal of their success thus far has depended on word of mouth.

In contrast to Major Arcana, which by necessity sounded rough and ready due to its quick four-day recording process, Foil Deer sounds like a much more thought-through effort. Whereas the last album sounded impromptu and lively, this sounds planned and detailed. The fact that both are so good is testament to the versatility of Dupuis’s songwriting, which is just as strong played by a punk-orientated Sleater-Kinney type group as if it were played by a more art-rock-based outfit like Slint. Speedy Ortiz often sound like a hybrid of those tendencies on this album, with spindly, intricate riffs played at punk volume but not at punk speed. After a brief opener ‘Good Neck’, we’re into the dissonant indie of ‘Raising The Skate’, whose arrangement reminds one of the jazz principle of listening to the notes that the musician isn’t playing, as Dupuis’ asserts herself lyrically “I’m not bossy, I’m the boss / caller of the shots”. The likes of ‘Dot X’, ‘Ginger’ and ‘Dvrk Wvrld’ pull the same exhilarating trick.

Single ‘The Graduates’, with its mixture of slacker guitar and punk volume, feels like condensed work of Pavement into four minutes, and allows us the first insight into the themes of Foil Deer, which is obliquely about friendships and relationships and how they change as we get older. Dupuis’ intelligent double-negative lyrics address an ex “I was the best at being second place / but now I’m just the runner-up at being the second one you think of every day before you go back to one”. Things get really interesting on ‘Puffer’, where we hear some heretofore unheard industrial and R&B leanings. Dupuis sounds both seductive and scary when she delivers lines like “I’m the god of the liars”, and again on the sub-2 minute stinger missile ‘Swell Content’ when she sings “sealing all your kisses with poison”. This lyrical battle between diary-like intimacy and oblique, abstract imagery is the undercurrent to the cerebral music, and it’s an intelligent an natural progression for Speedy Ortiz. Foil Deer is, as NPR called it, an “intricate cacophony”, a 40-minute précis of the last twenty-five years of American indie. But Dupuis and her band also feel like they’re the latest in a long and proud lineage of American underground music. (8/10)