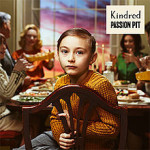 Electronic pop outfit Passion Pit, the brainchild of Massachusetts native Michael Angelakos, have delivered an eagerly awaited third album. Kindred follows three years after the well-received Gossamer, which achieved the interesting balance of sounding musically upbeat but thematically bleak. In it, Angelakos frequently lamented and berated himself about how he tended to let down people close to him. In the aftermath of its release, he revealed his private battles with mental health issues and how they had influenced that record’s outlook. Now happily married, he’s assembled an entirely new band and given us Kindred, an altogether more stable and positive musical experience but no less intriguing for the absence of such harrowing subject matter.

His happy domestic life is merely the foundation upon which Kindred is built. The actual bricks and mortar of its ten songs are made from the same lyrical and thematic concerns that have always occupied Passion Pit songs – but this time the spin that Angelakos has put on them is different. Time and again, Angelakos returns to themes of childhood for inspiration, and uses simple metaphors and dichotomies (light v dark, running to v running from) to express his struggles and triumphs, his hopes and fears, and his battle with bipolar disorder. The recent single and opener ‘Lifted Up (1985)’ is precisely the kind of unabashed, unashamed synth glory we’ve come to expect, with no trace of anything ‘indie’ within it all. About his wife, it uses the imagery of fighting, often in vain (“I fight so hard and come back beaten”), to make its point that his newly-attained happiness is fragile, and he knows it. The sound and sentiment of ‘Where The Sky Hangs’ is so thoroughly ‘80s that it teeters on the verge of ridiculousness, but Angelakos’ utterly sincere delivery of well-worn lyrics like “I get caught up in your heartstrings” makes it sound revelatory, like he’s the first person to ever sing them. ‘Five Foot Ten (I)’ goes for the same fidgety pop brilliance as ‘Make Light’ from 2009’s excellent Manners; ‘Until We Can’t (Let’s Go)’ uses the dull narrative of buying a house with his wife and makes it work – he’s planning a future for the first time – setting to a noise-pop onslaught of which Sleigh Bells would be proud.

‘Dancing On The Grave’ is a moment of repose, of quiet reflection, as Angelakos puts his frail voice right at the centre of attention and singing words like “someone told me that I ran too far away / some people tell me I should just give in and stay” in truly heartbreaking fashion. Only the unnecessary Auto-Tuned nonsense of closer ‘Ten Feet Tall (II)’ lets Kindred down – why would such a gifted singer want to distort his voice in such a way? Well, perhaps we shouldn’t demand total perfection. On the whole, Angelakos sounds like a man who values his peace of mind: giving thanks for his victory over his personal demons and the newfound stability in his life, however long it might last, and choosing to express that gratitude through the glorious, worshipful power of pop. With only one chink in its glinting armour of synth-pop (albeit a pretty serious one), Kindred is how all comeback records should sound. (8/10)