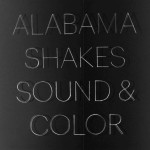 With their 2012 debut Boys & Girls, Alabama Shakes pushed their way to the front of the most recent retro-rock revival, alongside the likes of The Black Keys. Using authentic American soul and rock influences, from Curtis Mayfield, Otis Redding and recordings from the Muscle Shoals studio (located in the state which gives them their name), it was a fun, stripped-down experience. At the time, some pointed out the limitations of working exclusively with such firmly retro influences and wondered whether the Shakes would be capable of a follow-up. While the principle behind that criticism is valid – ‘record collection rock’ is never going to provide any real innovation – it doesn’t apply in this instance, as Howard and co. have delivered a very different sounding record in Sound & Color.

What’s immediately noticeable is how much quieter and more atmospheric it is than its predecessor. In fact, it’s not until two thirds of the way through that the four-piece really lets rip in the manner to which fans might be accustomed. Instead, Sound & Color is characterised by gentleness and subtlety. The opening title track channels the spiritual mojo of Tim Buckley, built from xylophones and soft licks of guitar, and is a surprisingly understated moment to open such an anticipated follow-up. Much of the album carries on the same vein, with a number of songs that seem perfectly crafted for scorching-hot mid-afternoon festival sets. The Mayfield-influenced ‘Don’t Wanna Fight’, the roaring blues ballad ‘Miss You’ and the dusty Southern rock of ‘Dunes’ all make a significant impact without resorting to the gritty garage rock of their debut. Brittany Howard’s soulful falsetto as ever, particularly the beautiful sparse Zeppelin-esque blues of ‘Gimme All Your Love’, which is the album’s centrepiece. The grainy Velvet Underground punk of ‘The Greatest’, which ends with an almighty thrashing of drums and guitars, is the only real onslaught of volume.

Ultimately, Sound & Color is weighed down by the same problem as their debut – not enough really good songs to truly be considered as a top album. There are too many unintrusive, inessential numbers for that: ‘Shoegaze’, which sounds nothing like the genre, the molasses-thick sludge of ‘Gemini’, and the worn-out solipsism of ‘This Feeling’ which clings to lyrical clichés like “I’ve been having a real good time”, a habit from which Howard seems unable to break free throughout the album, if truth be told. But at least, musically speaking, it is significantly more layered and subtle than Boys & Girls, something that Alabama Shakes have achieved by laying off the garage rock clatter and opening their sound up to more of the retro sounds they love so much, and they do at least sound at home in every genre they touch upon. A qualified success story. (7/10)