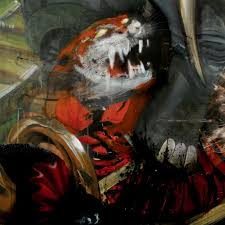 On ‘Jessica Rabbit’ Sleigh Bells have chosen to tone down the noise in favour of a more R&B and pop-influenced record.

“The guy that made Treats would hate Jessica Rabbit”, says Derek Edward Miller, the guitarist for the Brooklyn-based duo Sleigh Bells, in their recent Rolling Stone interview. One might assume this is in reference to the somewhat more approachable sound of the noise-pop group’s latest release. While the signature sound the band is known for (a blend of constant rhythmic noise, harsh, loud guitar riffs and vocals that sound somewhat like Lana Del Rey on speed) is still present on Jessica Rabbit, they have chosen to tone down the noise in favour of a more R&B and pop-influenced record.

In 2010, Sleigh Bells debuted with their loud, crunchy riff-filled album Treats, making a name for themselves in the New York music scene as an electric, experimental noise-pop duo. This launched nearly four consecutive years of non-stop touring and recording new material, the band releasing the follow-up to their debut Reign of Terror in 2012 and their third album Bitter Rivals in 2013, the latter of which saw the vocalist Alexis Krauss extend her creative influence over the music a bit more. Jessica Rabbit marks the return of the group after their first real break since starting their musical career and a significant change in the overall dynamic of the duo.

The band has brought in Mike Elizondo to produce this time around, a man who’s mostly known for working with Hip Hop big names like Jay Z and Eminem and is also fresh-off producing the chart-topper ‘Stressed Out’ by Twenty One Pilots. His mark is especially clear on the more pop-like and slower songs of the album – for example, the single ‘I Can Only Stare’. The trouble with songs like this is that while Sleigh Bells obviously try to make the sound their own and somewhat subvert the genres they are borrowing from, it comes off sounding a bit like a punk band trying to appear mainstream or a pop band trying to appear edgy. Either way, none of the options are especially appealing. It is especially odd to hear songs like those on the same album as songs like ‘Rule Number One’, which still offer that signature loud and crunchy sound of the band’s earlier work.

The good news is that in their three-year break in between album releases, the band did not lose arguably the most important innovation of their previous 2013 album Bitter Rivals – giving vocalist Alexis Krauss more creative space to show off her abilities. If the band’s debut and its follow-up were more Miller’s projects with Krauss coming in as a pseudo session vocalist with an interesting aesthetic and image. Then giving her more room to express herself has led to the band’s songs including a wider range of vocal melodies and more engaging lyrical themes on Jessica Rabbit, we hear Krauss showcase her talent especially on songs like ‘I Can’t Stand You Anymore’. The vocalist singing the chorus: “Bombs don’t compare to the trouble you bring me / I just can’t stand you anymore” is arguably one of the catchiest things the group has ever put out.

Jessica Rabbit seems like the natural progression from their previous efforts for Sleigh Bells. The band could not stagnate in the same creative space where Treats came from for long and them trying to vary their sound more is a commendable idea. However, they still have ways to go in order to truly achieve success in this new soundscape. This is a step in the right direction, as their original aesthetic meshes with the more pop approach rather well on songs like ‘Lightning Turns Sawdust Gold’. Other times it ends up falling in the unforgiving grey are of not being catchy enough to classify as good pop, but not being alternative enough to be as interesting as their debut. (6/10) (Ellie Wolf)

But what did  you at home think? Let us know here and listen below!