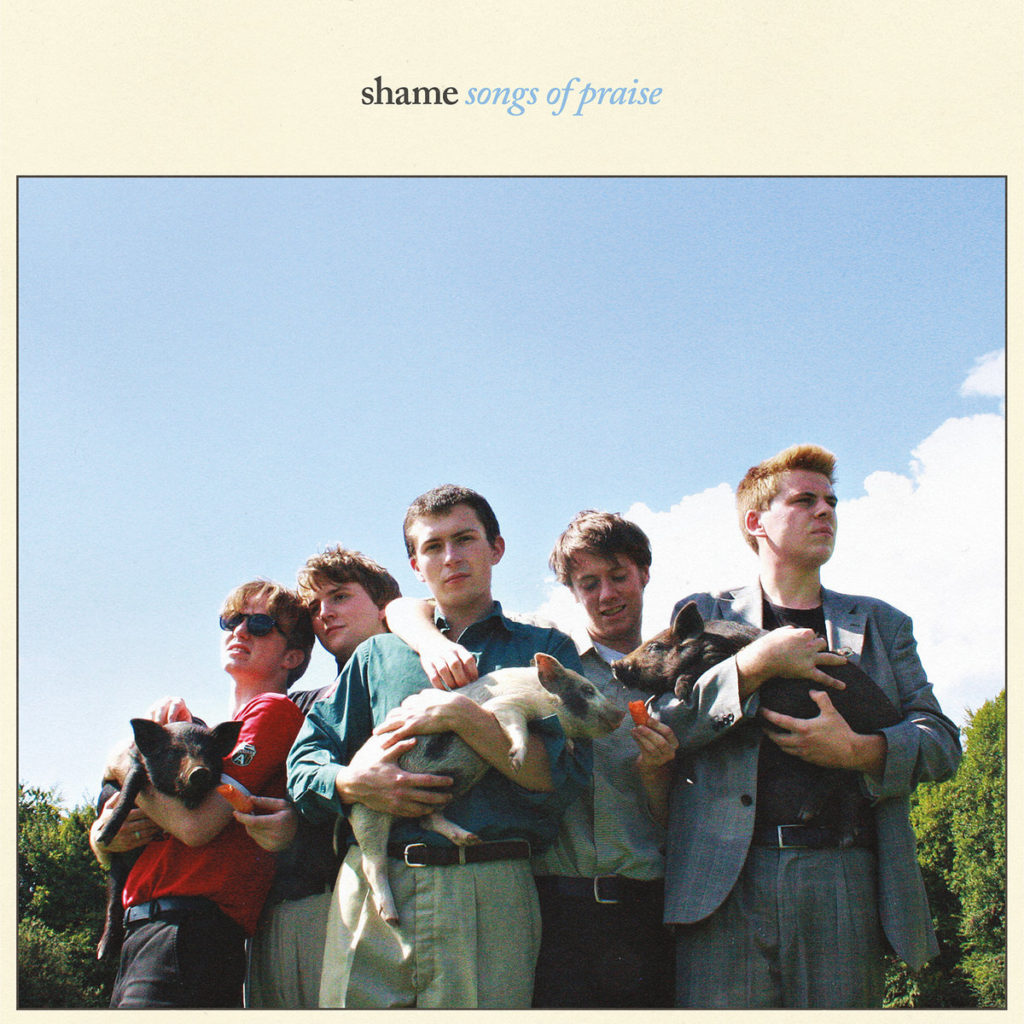 ‘Songs Of Praise’ is an outstanding debut both lyrically and instrumentally, and shows that Shame may fulfill all those breathless promises that they can save British guitar music.

Only two weeks into 2018, South London’s rising post-punk five-piece Shame have staked a claim to have released its best guitar debut. Songs Of Praise, a phenomenal album full of venom, rage and self-effacing wit, is capable of bearing the weight of all those promises of them being the new saviours of guitar music.

Although they’ve made efforts to eschew all the hype about them being the torch-bearers of an entire scene, Shame aren’t exactly wallflowers. They want to rock the establishment, and they aren’t afraid to offend. On ‘The Lick’, they mock conformists who want “something that’s relatable not debatable”. Then, over the bouncy bass-line and ringing guitar riffs of ‘Friction’, they question political indifference as frontman Charlie Steen softly sings, “in a time of such injustice / how can you not want to be heard?”

‘Gold Hole’ takes this tendency to another level, being a provocative story of a prostitute with the graphic yet fantastic lyric: “she wants the money, it comes with his cream / so she closes her eyes and pretends it’s a dream” over a dark, almost gothic instrumental.

This seriousness is tightly intertwined with cynical sarcasm and wit. The long, drawn-out opening line of the ‘The Lick’ of “so in the past week I’ve made several trips to the gynaecologist” is spoken in the style of Ian Dury with a sense of menace and sarcasm. Even the album title itself shows their brand of humour as ‘Songs of Praise’ is a long-running traditional religious show shown on the BBC.

‘Lampoon’ is one of the stand-out tracks of the album, especially out of those that haven’t already been released as singles. It’s fast-paced, gritty and raw. Shame have mastered how to keep the anticipation going as the song is constantly fluctuating both in terms of texture and volume, leading to a monumental breakdown of Steen’s screams of the provocative line “and my tongue will never get tired”, squealing guitars, thrashing drums and a lightning bass-line. ‘Donk’ is 101 seconds of spontaneous madness and with whirling dissonant shouts and screams mashed onto the bullet-like drum beat against Steen’s threat of “I’d love to pick you up / but I would rather watch you fall”.

Importantly, Shame have mastered how to capture the energy and charisma of a live performance on record first time out – and if you have seen them in the flesh, you will already know how lawless their energy and showmanship is. One feels that the summer of 2018 will be important, with festivals and touring representing the best chance of selling Songs Of Praise to the public at large.

All in all, this is an outstanding and exciting debut, both lyrically and instrumentally. Its raw ferocity coupled its biting humour and political vigour makes Songs Of Praise addictive and unforgettable. (9/10) (Sandie Garland)

Listen to Songs Of Praise by Shame here via Spotify, and tell us what you think below!