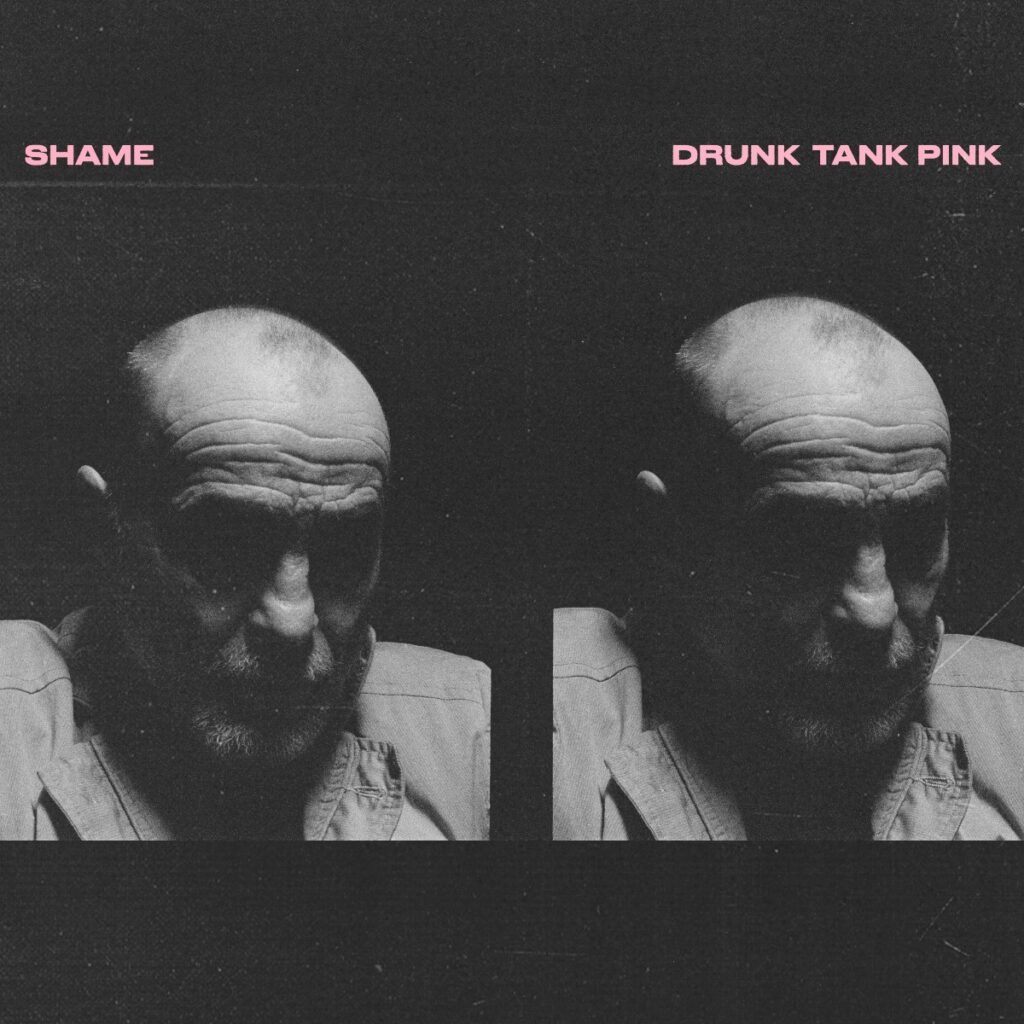 Shame’s second album ‘Drunk Tank Pink’ takes a darker turn away from their debut, but comes off like an immaculately observed but ultimately slightly uninspired collection.

Even though it’s their second album, Shame’s Drunk Tank Pink reeks of debut. This isn’t intended as an insult, or as a way of putting down their music or sound – in fact, quite the opposite. Drunk Tank Pink feels like a reinvention for the South London band. 2018’s debut album, Songs Of Praise, was an album of bouncy, feel-good indie gems. Its cover art, which detailed the members hugging farmyard animals, directly contrasts the new album’s artwork, a stark, grey, harsh image of a man, stooped in shadows, grey and old. Even the album’s title seems to be at war with itself. ‘Drunk tank’ being one, but the use of ‘pink’ seems so out of place. That feeling hangs over pretty much all of the 41 minutes of music within.

Opener ‘Alphabet’ takes influence from IDLES, Fontaines D.C. and thrashes about, slowly building up to a crescendo. However, it feels like Shame are taking more away from the high energy guitars and panicky drums of bands like Squid and LCD Soundsystem. It still sticks to its guns with guitars instead of using any electronics, but it’s clear that some inspiration was taken and used quite well.

However, Drunk Tank Pink does suffer slightly from being too much a product of those influences. Sure, everything is played excellently, and the album never feels boring, but you more often than not will find yourself thinking “oh, that sounds like Squid” or “that sounds like IDLES”, instead of thinking “Shame sound like Shame”. They rarely reach a point where their own individual identities surface, at least not nearly as much as they did on their excellent debut.

‘Snow Day’, however, does have a great moment. The song’s entire beat and tune changes around the midpoint, its drums and guitars becoming quicker, edgier. It’s a really exciting moment that grabs your attention, holding it, making no apologies for its loudness. It wouldn’t feel out of place on a Swans album, it feels that big. Unfortunately, ‘Snow Day’ feels out of place here. Even though the whole of Drunk Tank Pink is aiming for these heights, it feels less and less exciting whenever they reach them. It feels like an M Night Shyamalan movie; you kind of know that something exciting is going to happen so it feels less like it’s coming out of nowhere.

If this is your first deep dive into British post-punk, you can’t go wrong with Shame. It is an exciting 41 minutes they’ve delivered. However, if you’re familiar with any music that the British scene is currently generating, the sounds, direction and moods that Drunk Tank Pink is presenting are not anything new. Which – funnily enough – is a shame. (6/10) (Harrison Kirby)

Listen to Drunk Tank Pink by Shame here via Spotify, and tell us what you think below!