REVIEW: Roisin Murphy – ‘Take Her Up To Monto’ (PIAS) 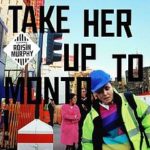 “I always believed I had the potential to be a pop star,” Roisin Murphy quipped on her return to music after eight years away with the excellent Hairless Toys, the follow-up to possibly the most underrated album of the noughties in Overpowered. But, as is the case with many stars, Murphy never seemed to transcend popular culture, in just the same way as her similarly underrated group Moloko did in the late nineties. On fourth solo record Take Her Up To Monto, the Irish songstress has given up on the idea of pop – but the results are just as outstanding.

Murphy has always done things differently and in Take Her Up To Monto, written during the same burst of creativity as Hairless Toys she has fully avoided all preconceptions on what pop is and, in the process, released a refreshing and accessible album that only she could make. Opening track ‘Mastermind’ immediately captivates a surreal world, sounding similar to Arcade Fire’s ‘Supersymmetry’ but given its own electro-pop twist it stands fully on its own and is immediately captivating.

‘Pretty Gardens’ is a tongue firmly in cheek jazz-infused, minimal pop song. The song is almost confrontational in its abrupt sexuality (“Look at me all naked / I let my pretty garden go wild”), however the lyrics, when deeper, hint at the scorns of rejections. Murphy’s hushed vocal ushers into an alternative universe with an abundance of layers of keys, percussion and harmonies. The album really does have an excellent beginning. Murphy’s confidence is what provides the backbone for the record; every lyric is assured and every idea pushed to its limit. ‘Ten Miles High’ is minimal in instrumentation but seemingly relaxed in its own knowledge that this is one of the best songs on an excellent record.

Take Her Up To Monto’s confidence is only added to by looking at the times of each track: nearly every song hits the five minute mark and in doing so has allowed Murphy to flesh out all her ideas in full. ‘Nervous Sleep’ is a near nine-minute epic which fluctuates and hints at the krautrock of Nurse With Wound due to its abstractness. Meanwhile, ‘Thoughts Wasted’ hints at pop, but always veers away with beautiful piano based hooks and the well-constructed production from long-time collaborator Eddie Murphy feels powerful. The fact that both are allowed to exist on the same record is a credit to Murphy and her song-writing prowess.

Roisin Murphy may not be a pop-star in the vain of Björk but she deserves to be mentioned in the same conversation; throughout Take Her Up To Monto’s 47 minutes Murphy, in not trying to make a pop record, constantly asks us to question ‘what is pop music?’. Murphy may not be reaching the charts or the front pages anytime soon, but that doesn’t matter because she can relax in the comfort of knowing that even when she is at her most abstract she has the innate ability to make accessible pop. Never a bad quality really. (8/10)

Listen to Take Her Up To Monto here via Spotify, and tell us what you think below!