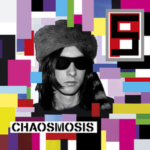 Given what has happened to so many of their contemporaries from the early ‘90s, who’ve either disappeared into complete irrelevance or are desperately coining it in re-touring their old albums, Primal Scream have become some of the hardiest survivors in music. Just when everybody has written them off as an irrelevant museum band, Bobby Gillespie, his trusty crew and an ingenious producer reinvent Primal Scream once more with an album of cutting edge pop to keep them within the popular consciousness. 1991’s groundbreaking dance/rock hybrid Screamadelica and 2000’s visceral XTRMNTR are among the very greatest albums of their respective decades, while their last album More Light unexpectedly gave them a third lease on life back in 2013, filled with mesmerising, kaleidoscopic structures that elevated them back to their glory days.

But how much longer can Primal Scream realistically continue with this pattern of artistic brinkmanship? On the evidence of this 11th album, Chaosmosis, there’s no reason why it can’t go on indefinitely, as it contains many catchy and thoroughly modern pop moments that still sound distinctively like Primal Scream. By selecting credible and diverse collaborators such as Sky Ferreira, Rachel Zeffira and the Haim sisters, Gillespie and co. display an admirable willingness to keep their sound fresh, but it’s the sound of a band in transition, slightly unsure of its true identity. That’s fine though, because in this respect Chaosmosis often resembles Evil Heat and Beautiful Future, both enjoyable if imperfect records that also featured a host of contemporary guest stars.

The colourful, scrambled artwork belies this lack of musical cohesion, but that very diversity is nevertheless enjoyable to behold. Lead single ‘Where The Light Gets In’, featuring Ferreira in a duet, is the most perfect example of this concise pop approach, a sparkling new-wave influenced gem that ranks among Primal Scream’s very best singles. The ‘10s, MIDI-triggered pop style is evident on icy, bright tracks like ‘(Feeling Like A) Demon Again’ and ‘Carnival Of Fools’, replete with bleeping melodies. ‘100% Or Nothing’, featuring the Haim sisters, is similarly full-on with its brash, stomping rhythm but could do with a few more distinguishing features. The gorgeous new single ‘I Can Change’ is perhaps the most promising new direction for a future Scream album, structurally minimalist yet unmistakably sunny and soulful despite the heartbreak at its centre.

Irritatingly, the Scream have always seemed to have a ‘Rolling Stones-circa-Voodoo Lounge’ kind of default setting (see 1994’s Give Out But Don’t Give Up and 2006’s Riot City Blues…), but thankfully Chaosmosis rarely lapses into such mediocrity, though the handclaps and guitar shimmy of ‘Golden Rope’ comes awfully close. But sometimes, it sounds as if the group has more gears to go through or could explore their ideas a bit further rather than cutting the running time short in the name of pop discipline. Opener ‘Trippin’ On Your Love’ is such a moment, a lazy xerox of the grooves of Screamadelica that feels totally phoned-in. The techno assault of ‘When The Blackout Meets The Fallout’ lasts for under two minutes which is seriously unsatisfying, although the same can’t be said of the rather dreary acoustic guitar interlude ‘Private Wars’, which thankfully disappears after two minutes.

However, it’s undeniably impressive that a band that’s been going for nearly 30 years is so open and willing to experiment with new sounds and receptive to new ideas – even if their execution is rarely perfect. The laser-precision hedonism of ‘Where The Light Gets In’ is pretty much worth the entry fee alone. Many of the concoctions are a bit light and unfulfilling, despite their impressive packaging, but Chaosmosis ultimately scans as an intriguing, if incomplete and often sketchy, reinvention of Primal Scream’s sound for 2016. (6/10)

Listen to Chaosmosis here, and tell us what you think below!