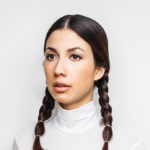 Emmy The Great’s first two albums, First Love and Virtue, both explored heartbreak and the ending of a relationship. It’s been five years since Emma-Lee Moss’s last record and her third effort to date is certainly more introspective and focused on advancements in technology, and how it affects everyday life. Labelled as a former anti-folker, Second Love mixes electronica with intricate orchestral arrangements to create a confessional record, which documents the aches and pains of modern day life.

Album opener, ‘Swimming Pool’, mixes orchestral harmonies with digitally modified vocals. The track sets the bar high for the record and Emmy described the song as “a raised bar that I spent three years chasing”. Tracks such as ‘Hyperlink’ and ‘Algorithm’ move towards a sound favoured by more R&B-based contemporaries including FKA twigs. The minimalist synth sound is driven by Moss’s impressive and personal lyrical style. ‘Constantly’ sets a foreboding tone which laments the repetition of everyday life and society’s obsession with social media. ‘Social Halo’ carries on the theme of digital insecurity, whilst creating an element of tension that is generated by clever satirical lyrics and a sparse soundscape.

The latter third of the album slows down a little, with ‘Shadowlawns’ and ‘Phoenixes’ heading back to Emmy’s folk routes. The abstract nature of the tracks and minimalist approach paradoxically help to create an element of immediacy – in comparison to the first half of the record. Both tracks may gain natural comparisons to Julia Holter and Feist due to the synth-led arrangement, but Emmy The Great has great depth to her distinctive, ethereal soundscapes. Second Love takes a step away slightly from the folk foundations of her first two albums. This album takes a wider venture into electronic soundscapes, which will certainly leave fans impressed with her dystopian view of life. (8/10)

Listen to Second Love here, and tell us what you think below!