REVIEW: Jeff Buckley – ‘You And I’ (Columbia / Legacy) 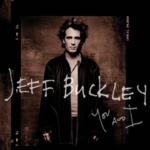 Since his untimely death in 1997, Jeff Buckley has cast a shadow over popular music that’s vastly disproportionate to the tiny catalogue he left behind. One seminal album released during his lifetime (1994’s Grace), a double album of rough, unfinished material (Sketches For My Sweetheart The Drunk) are the only studio material in existence, alongside half a dozen live documents of varying quality that have been released to try to get a handle on this most elusive of artists. Barely enough material for a compilation, seen in 2007’s adequate So Real: Songs From Jeff Buckley, which is perhaps a good thing as it forces the uninitiated to take the plunge rather than dip their toes in.

The main reason for the undying public interest in Buckley is his fantastic voice, unquestionably one of the most haunting and versatile in pop history. There’s a reason that his exquisite version of Leonard Cohen’s ‘Hallelujah’ is often considered to be one of the best cover versions of all time: the way in which he makes it so much his own, elevating a good, but unexceptional, original into something truly transcendent. But ‘Hallelujah’ also holds the other key to Buckley’s appeal – his skill as an interpreter of other people’s songs – and it is this aspect of his artistry that this new collection, You And I, explores in depth.

Constituting the first recording session Buckley would undertake for Columbia in February 1993, undertaken in New York’s Shelter Island Sound, the fact that eight of the ten songs here are covers, (two of which are of The Smiths) is simply reflective of his live repertoire at the time. Ranging from pop standards to Delta blues with the odd bit of devotional music, Buckley was incredibly diverse and musically literate, but starkly out of time with the American music scene of the early ‘90s, dominated as it was by Nirvana and grunge. But it’s a snapshot of a moment in time, of an artist not quite sure what direction to take, and this is the primary appeal of this collection.

The first track we’re offered is a previously unheard version of Bob Dylan’s ‘Just Like A Woman’, and it’s a perfect example of Buckley’s uncanny power to seem to stop time, particularly in the way he elongates the opening syllable “no…..” in “nobody feels any pain”. It’s just as spectral as the original, but where Dylan’s is serene, Buckley’s version seems to intimate loss, meditating on an absence rather than a presence. In some ways, it’s worth the price alone. Following that is a choppy, intriguing take on Sly & The Family Stone’s ‘Everyday People’, which works through the listener’s willingness to suspend disbelief.

Of the two Smiths covers, his well-known version of ‘I Know It’s Over’ sees him give a sympathetic reading of Morrissey’s lyrics, drawing out their humanity and treating the original with deep reverence like a kind of holy text. The version on 2000 live album Mystery White Boy is still superior, however. The other, an inert interpretation of ‘The Boy With The Thorn In His Side’, is much less compelling but it perfectly pretty in a Radio 1 Live Lounge sort of way.

However, You And I is merely Buckley in a room, strumming his guitar, and it necessarily lacks that sense of communion and kinship with other musicians that gave Grace its unique chemistry, and made it one of the most enduring albums of the ‘90s. It also quickly runs into trouble with some of the more questionable cover versions. One simply fails to see the point of the faithful rendering of Jevetta Steele’s ‘Calling You’ or Led Zeppelin’s ‘Night Flight’, though the latter did influence Buckley’s own rocker ‘Eternal Life’. The excruciating take on the traditional ‘Poor Boy Long Way From Home’ is far too long, as Buckley just about executes the slide guitar but totally fails to interpret the blues, and leaves you lunging for the skip button. Joe Greene’s 1946 R&B hit ‘Don’t Let The Sun Catch You Cryin’’ is merely competent, but does underscore his interest in American roots music.

Only two tracks on You And I are Buckley originals. You can hear the exquisite heartbreak of ‘Grace’ in an embryonic form but in an arrangement that is very ho-hum. Previously unreleased is ‘Dream Of You And I’, a gently picked acoustic number that would eventually mutate into the demo ‘You And I’ that can be heard on Sketches For My Sweetheart The Drunk. Buckley segues into a spoken word soliloquy, recalling a dream he had of a psychedelic rock group playing at an AIDS rally. You quickly realise he’s not speaking to anybody except the engineers behind the glass in the studio, and while it’s captivating, it’s not particularly illuminating.

This is the problem with far too many of these archive-trawling recces, but You And I at least attempts to explore another side of Buckley, even if only semi-successfully. Aside from its value to hardcore Buckley fans, there’s little to really be gleaned from You And I apart from yet another reminder, as if we needed it, of his truly beautiful voice. As for his status as a once-in-a-generation talent, there was more than enough material already out there. You And I just about holds water as a valid artistic exercise, but all it ultimately wants to make you do is revisit Grace once again. “That’s it, it’s over, let’s go home” Buckley can be heard saying after the end of the last track. Perhaps that’s good advice – it’s now time to finally let go. (5/10)

Listen to You And I here, and tell us what you think below!