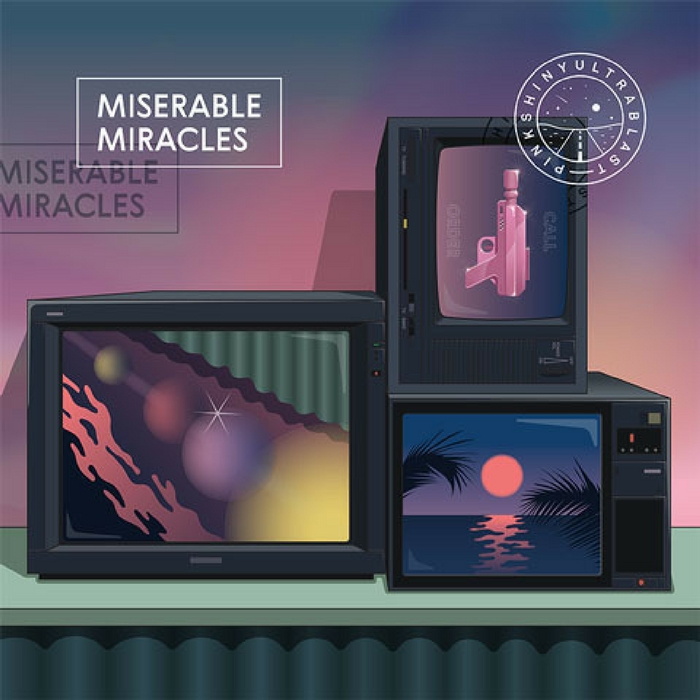 Mixing up their previous shoegaze stylings with trappings of electronica, ‘Miserable Miracles’ is a fine musical evolution for Pinkshinyultrablast.

Russian outfit Pinkshinyultrablast and their first two albums Everything Else Matters (2015) and Grandfeathered (2016), have been following in the footsteps of artists who have been commended the term ‘shoegaze’. This dreamy and noisily lo-fi genre’s stylistic pop template was arguably made relevant by My Bloody Valentine (particularly with their ‘90s masterpiece Loveless) and then further spearheaded by acts such as Chapterhouse, Catherine Wheel and Ride. Moreover, the group has cited Cocteau Twins to be an inspiration which makes sense given that lead vocalist Lyubov evokes similar flair to the ethereal Elizabeth Fraser. For Pinkshinyultrablast to originate from a country where shoegazing is a non-ubiquitous term and gain the commercial exposure they have is a fascinating achievement.

Their newly-released third LP Miserable Miracles steers the group in a slightly different and more electronic direction that does not delineate entirely from the shoegazing manifesto. When talking with the publication Drowned In Sound, guitarist Roman said the following: “Since the last album we are geographically away from each other and the change in locations has led to us moving in new directions musically too. The sound and its production we feel has progressed. For those people who look to genres, we are maybe in a different one too now.”

Right from the off, the opener ‘Dance AM’ showcases this change. The scintillating, fast-paced electronica coupled with Lyubov’s angelic vocals possess only positive attributes. Pinkshinyultrablast have dotingly expressed themselves here which is only matched by the krautrock-inspired second track ‘Triangles’ which Lyubov said (again with Drowned In Sound) the song “felt like a tribute to Stereolab in way”. The predominant electronic melody induces a sense of excitement and buzz within the listener.

Elsewhere, the J-pop-inspired ‘Taleidoscope’ reinforces Lyubov’s heavenly and wholesome vocals and the bright protruding sounds evoke calming imagery of azure skies, while the sounds on ‘In The Hanging Gardens’ are just as bright, the abiding tone is more anxious and perilous in nature. Pinkshinyultrablast also treat the listener with two instrumentals ‘Blue Hour’ and ‘Earth And Elsewhere’ where the latter acts as a gateway into the second half of the album. ‘Blue Hour’ is a simple two-minute interlude which displays Pinkshinyultrablast’s professionalism when it comes to music production. ‘Earth And Elsewhere’ was designed to sound like a soundtrack or film score, which it does. The snap chord changes are nothing short of endearing as they keep the listener hooked throughout.

So far, Miserable Miracles is shaping up to be a great album overall. But there are a couple of little irking niggles that need to be addressed. The production on the track ‘Find Your Saint’, while enjoyably vibrant, does sometimes drown out Lyubov’s voice, which needs to be at the forefront. The electronic riffs on ‘Eray’ are a tad unoriginal, but still a fitting tribute to keyboardist Rustam’s son of the same name. No matter, the album ends on a high with the closer ‘Looming’ surprising the listener with some distortion that contrasts the less abrasive electronica.

Miserable Miracles successfully merges their previous shoegazing style with the realms of electronic music. Fans should excitedly anticipate a fourth album which could potentially be even better with the amount of room that is available for experimentation if Pinkshinyultrablast keep up this newfound and bold façade. (7/10) (Harry Beynon)

Listen to Miserable Miracles by Pinkshinyultrablast here via Spotify, and tell us what you think below!

'For Those That Wish To Exist' solidifies Architects' status as…

Embracing a bigger sound than her acutely intimate early work,…