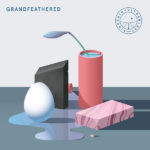 Following on from the minor success of their debut record Everything Else Matters, St. Petersburg’s five-piece Pinkshinyultrablast return with their self-described blend of ‘thunder pop kung-fu gaze’, which saw them play to sell-out crowds in tiny venues throughout 2015. Grandfeathered is an expansive eight-track album, which capitalises on the soundscapes that were explored throughout their debut. It doesn’t stray too far from tracks on their debut, like its highlights ‘Holy Forest’ and ‘Umi’. Due to their otherworldly sound, they are a band that can afford to stick to a similar format and expand sonically. For those unfamiliar, the band’s female vocalist Lyubov Soloveva brings a delicacy that counterbalances the aggressive guitar riffs and layered synths. There’s certainly a Sonic Youth / Cocteau Twins cross-over as the vocals go throughout the ranges in scale, but the lyrics are difficult to decipher.

Short album opener ‘Initial’ is a perfect follow-on from Everything Else Matters featuring a hybrid of shoegaze and deep, ambient electronic synths. We then see Pinkshinyultrablast head into a heavier soundscape on ‘Glow Vastly’ which is characterised by reverberated vocals and grungy guitar riffs. By far the most accessible track on the album, ‘Kiddy Pool Dreams’ links together their two albums with the combination of synth led pop and heavy guitar riffs. Similarly, lead single ‘The Cherry Pit’ hints towards darker elements of their sound whilst maintaining lightness with Liz Fraser-style vocals. There are elements of math rock in which the band develop the traditional pop concept as seen on their debut. ‘I Catch You Napping’ is a prime example in which the controlled rhythm allows the vocals to come to the forefront in comparison to other tracks.

Due to the relative shortness of the record, Grandfeathered is designed to be listened to in one sitting. As a whole, the album has a feeling of familiarity but the heaviness in a number of tracks creates some freshness. If the album was further developed it would have become slightly less tedious at times, but it at least represents a band keeping things ticking along nicely. It will be interesting to see how they progress into a third album – while they already offer their own distinctive style of shoegaze pop, a more radical change in the base elements of their sound might have been on the cards. (6/10)

Listen to Grandfeathered here, and tell us what you think below!