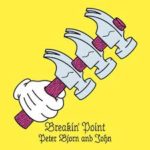 After releasing six indie pop-soaked albums and then spent five years on recording hiatus, Swedish trio Peter Bjorn and John have eventually found themselves embarking on the pilgrimage to full blown pop perfection. Perhaps hoping to finally be rid of that never-ending whistle hook that at first helped mould the trio’s career highlight but completely dwarfed their many other fine accomplishments, PB&J’s new album Breakin Point looks for infectious melody elsewhere through ‘80s synthesisers and a rich, contemporary translation of disco groove.

Recruiting a star studded team of pop producing powerhouses (Paul Epworth, Greg Kurstin and Emile Haynie), PB&J travelled to ABBA’s old recording studio in Stockholm with all the necessary components in place to build a singles saturated masterpiece. In many ways, they’ve accomplished what they set out to achieve. From the flawlessly polished production to the consistently attractive choral hooks, Breakin Point ditches PB&J’s musical simplicity and replaces it with a far more memorable and identifiable aesthetic. The rarely fluctuating bounce to each track provides the album with its extreme accessibility, ‘Do-Si-Do’ and ‘Love Is What You Want’ being the two standouts.

It’s a shame that Breakin Point loses a significant degree of calibre through the absence of any real lyrical character. The overly used juxtaposition of downbeat lyrics, incidentally depicting waning romance but delivered in feel good fashion just isn’t quite enough to grasp any further mention of praise. Looking in from the exterior, PB&J’s attempt to receive a greater scale of commercial recognition appears well calculated and immediately seductive. However upon closer inspection, Breakin Point reveals already existing cracks in its flowery foundations. (6/10)

Listen to Breakin Point here via Spotify, and tell us what you think below!