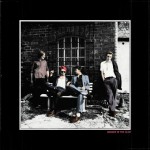 Front cover of ‘Danger In The Club’

Following the breathless reviews of their signature song ‘Best Of Friends’ that put them on the radar at the end of 2012, Palma Violets scrambled to capitalise on the exposure with the rushed release of their debut album 180, a record that displayed promise but was low on original ideas and ultimately undercooked. The fallout from that release nearly broke them apart, according to recent interviews with the band, until intervention from their label and new producer John Leckie (Radiohead, The Stone Roses) helped re-energise and re-focus them. Hopefully, with two and a half more years of experience and wisdom under their belts, Palma Violets can deliver on the promise they displayed when they first emerged.

Much like its predecessor, Danger In The Club (terrible title, by the way) constantly teeters on the edge of total sonic chaos, but this time round displays a greater variety of ideas. It is effectively their debut, version 2.0, designed to rectify the first mistakes of 180, something reflected in the almost identical artwork – another largely monochrome shot of the band posing outside a shabby-looking building. And for the first handful of songs, the gritty, grotty music backs that up, with perhaps a wider sprinkling of influences than last time. The daft ‘Hollywood (I Got It)’, which sees Fryer barking “Fresh fish! I got it!” like some rock version of the £1 fish man, is set some pretty impeccable surf-punk and new wave. ‘Girl, You Couldn’t Do Much Better (On The Beach)’ is a convincing facsimile of late Ramones, and the flamboyant strut of both the title track and ‘Gout! Gang! Go!’, with their chunky Clash-esque rhythms, are decent.

As we get deeper into the album, a sense of experimentation begins to seep in, and the chemistry between Fryer and Jesson is highlighted. The softer-edged ‘Coming Over To My Place’s pay-off line “I’d rather be dead than be in love” is exactly the kind of sing/shout-along that’s Palma Violets’ strength, and the kind of thing missing all too often from 180. The rowdy current single ‘English Tongue’, which closes the album and builds a layer of piano into the mix, is a similarly enjoyable moment. Best of all is the acoustic ode to an ex ‘The Jacket Song’, which sees Fryer apologise for his behaviour – “we had a pact but I was fucked / that’s just how it goes”, that makes a neat change of pace amid the swirling, clattering noise that characterises the rest of the album.

The major problem remains from the first time around, which is that Palma Violets are a much more effective live band than they are on record. They simply cannot seem to capture the riotous power of their performances in the studio, which prevents it from being anything more than transiently enjoyable. Which, if you’re simply looking for dumb rock’n’roll thrills, is fine. Another significant flaw lies in Fryer and Jesson’s largely incomprehensible shouted vocals, which are masked and distorted, presumably in an attempt to get an ‘authentic’ grotty rock ‘n’ roll feel. It sounds good for a bit, but it hinders the enjoyment for anybody who wants to engage with the band on anything deeper than a surface level. Danger In The Club is far from the classic album that the group clearly want this to be, but at least it rings true: you simply can’t fault their enthusiasm or their conviction. But time is now running out for Palma Violets to prove their critics wrong. (6/10)

Listen to Danger In The Club here!