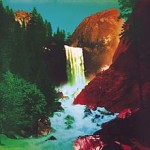 Front cover of ‘The Waterfall’

Since their 2005 masterpiece Z, My Morning Jacket have been enjoying a status in America similar to that of The Cribs in Britain – probably the country’s biggest ‘small band’. They’ve got a significant cult following, critical adoration and a small impact in wider popular culture, even once appearing in an episode of Seth Macfarlane’s ‘American Dad!’, but they’ve never really broken through into the mainstream. Their fundamental sound, that of an indie band playing country music, has been reshaped over the fifteen years since their debut, but the one constant has been lead singer Jim James’s striking, high-register voice. Even in the band’s weaker moments, his angelic vocals have always been enough to carry the day – in his hands, even the most worn-out clichés seem like revelations. 2008’s Evil Urges indulged their newly-acquired licence to experiment, with mixed results, and 2011’s Circuital half-heartedly attempted to row back to their former position. The Waterfall feels like a more convincing rediscovery of their magic.

Part of what makes MMJ special is their ability to experiment and explore their sound, taking a prog-rock approach to country, folk and Americana, but also getting the basics right and knowing when less is more. ‘Get The Point’, for example, is exactly the kind of break-up song that would be considered too cornball for most highbrow bands, but James works his magic and it succeeds spectacularly. A lyric like “I never have an answer / I never seem to be there for you / And I wish you all the love in this world and beyond / I hope you get the point” is set to beautiful yet entirely familiar chord changes, but the chemistry on display makes it seem totally weightless and effortless, as music and message reinforce each other. The acoustic alt-folk of ‘Like A River’ does a similar thing, choosing economy over indulgence.

Elsewhere, MMJ let rip in that relaxed manner to which fans have become accustomed. Opener ‘Believe (Nobody Knows)’ feels like a precision-engineered live set mainstay for years to come, as James gets away with a lyrical howler like “believe, believe, believe… nobody knows for sure” because of the sheer conviction in his voice as he ascends to hit the final ‘believe’. It’s followed by the gently undulated drum pattern that drives ‘Compound Fracture’, another typical MMJ moment. ‘Thin Line’, with its pealing guitars and violins, finds James in top vocal form, the closest the album gets to the breathtaking beauties of Z. The circular construction of ‘In Its Infancy (The Waterfall)’ might be a metaphor for MMJ themselves, with its lyric “the idea was always there in its infancy / the seed took root over many years”. The expansive closer ‘Only Memories Remain’, at over seven minutes, is another delight.

My Morning Jacket has always been about exuding good vibes, giving thanks and general positivity. Even though James tries to explore his dark side on a couple of tracks, allowing self-doubt to creep in on ‘Get The Point’ as he wonders to himself why he can’t make relationships work, it really doesn’t detract too much from MMJ’s modus operandi, which will be good news to long-term fans. There are no mistakes or bad ideas on display, though a couple could do with a little more exploration, which means that The Waterfall is their strongest work in the decade since Z, purely on the basis of its consistency. It’s frequently very good, but rarely spectacular. (7/10)

Listen to The Waterfall here!