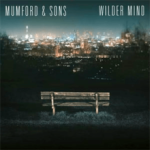 Unless you’ve been marooned on a desert island for the last two months, you can’t fail to have noticed all the talk about old-timey folk impersonators Mumford & Sons “going electric” with their third album. The formerly self-identified ‘gentlemen of the road’ have ditched the accordions, banjos, waistcoats and tweed and opted for leather jackets, electric guitars and keyboards. Marcus Mumford has even described the band’s name as a “pain in the arse”, and ex-banjoist Winston Marshall recently told Vulture that he “hates” the instrument, and that the group now wants to make music to “freak people out”. They’ve also dropped producer Markus Dravs, who was behind Babel and Sigh No More, and hired Florence + The Machine and Haim collaborator James Ford in his place.

For such a successful band to take this kind of risk with their USP is significant, even admirable, but the actual music on Wilder Mind throws up a couple of practical problems with the Mumfords’ new approach. It’s hardly the spasmodic flinch away from the glare of spotlight that the band’s interviews would seem to indicate – if anything, they sound even bigger and more mainstream-focussed for their stylistic makeover. Recorded in The National’s Aaron Dessner’s New York studio, it’s aiming for the sweeping gravitas of that group, or The Maccabees’ Wall Of Arms. But for all its arena-filling ambitions, the songs just aren’t strong enough to justify it. Funnily enough, the Mumfords’ sound was already capable of filling huge spaces, as anybody who’s seen their live performances will attest. This time around, that desire is pushed right to the front, the raison d’etre for the sound rather than a happy side effect of it. They’ve caught ‘the big music’, and boy, have they got it bad.

The faintest traces of their former sound lie in the kick drums of lead single ‘Believe’, which in all other respects is a billowing, by-the-numbers stadium rocker in style of Coldplay. Similarly, ‘The Wolf’ is the curious sound of one of the most commercially successful acts of recent times going for the big commercial blowout, like an army surrendering territory they’ve already captured only to fight the same ground all over again. Only this time, wearing different clothes. It’s a genuinely strange evolution to have made, one entirely to do with style and not substance. Characterised by languid guitars and subtle, insistent drum and bass guitar rhythms that will be very familiar to any modern guitar music fan, it sounds like they’ve attempted to capture the wide-eyed magic of The War On Drugs and then stripped it free of anything interesting, like all the ingredients scraped off a pizza base.

Lyrically speaking, Marcus Mumford is as sweepingly sentimental as he always was, reliant on impersonal platitudes and grandeur rather than introspection or biographical revelation. However, he has added some depth and variation to his vocal style. He’s still got that do-or-die, eye-popping delivery that compensated for the flaws of their first two albums, except on Wilder Mind he sounds much more nuanced, sometimes building up to those peaks from not much more than a mutter. That build-up of tension through restraint, and the release of it, is the main revelation of the album. But, as on previous Mumfords albums, his voice has to an awful lot of heavy lifting to try to bring some pretty generic songs to life, and he doesn’t always succeed.

You can hear the tremendous strain they’re putting in to the new sound on opener ‘Tompkins Square Park’, which as a result sounds workmanlike when it should be effortless. The familiar generic relationship platitudes occupy Mumford’s mind (“can you tell what’s on my tongue / can you guess that I’ll be gone / with the twilight / no flame lasts forever”). The title track, ‘Only Love’ and ‘Broad-Shouldered Beast’, ‘Believe’ and ‘The Wolf’ all revert to the formula: starting off small, then not going anywhere in particular, as long as it sounds ‘big’. It isn’t quite as uniformly bland as this throughout, happily. The fantastic ‘Snake Eyes’ absolutely nails the kind of thing that the band struggles to replicate throughout the rest of album, gradually implementing synths as the sound expands gloriously outwards until escape velocity is achieved. “It’s in the eyes / I can tell you’ll always be danger” Mumford howls as it draws to a close, and it’s a spine-tingling moment. Elsewhere, on ‘Just Smoke’, the band expose their folk roots in a comforting reminder for long-term fans, and the skeletal ‘Cold Arms’, clearly designed to be the lighters-aloft / signal-to-go-get-beer moment of future live shows, is a moment of respite from the otherwise singular dynamic of the record.

Perhaps this drastic overhaul has been done in the name of winning over critics, who have been pretty evenly split over the Mumfords’ sound and the effect they’ve had on music ever since their debut. Adored by the masses, perhaps they now want to be loved by taste-makers, curators and archivers by making an album everybody might enjoy. Wilder Mind opts for the U2 path of artistic ambition – make a huge-sounding stadium rock record – and in doing so, they’ve made an album that’s likely to neither anger nor satisfy anybody. Paradoxically, while Wilder Mind is a failure on its own terms – the only people this is likely to ‘freak out’ are those who find Keane a bit too much to handle – it’s still the best thing the band have ever done. However, one can’t help but feel that Mumford & Sons have burned their ace card and now have no distinguishing features at all. It’s still very formulaic, but it’s at least a different formula. (5/10)