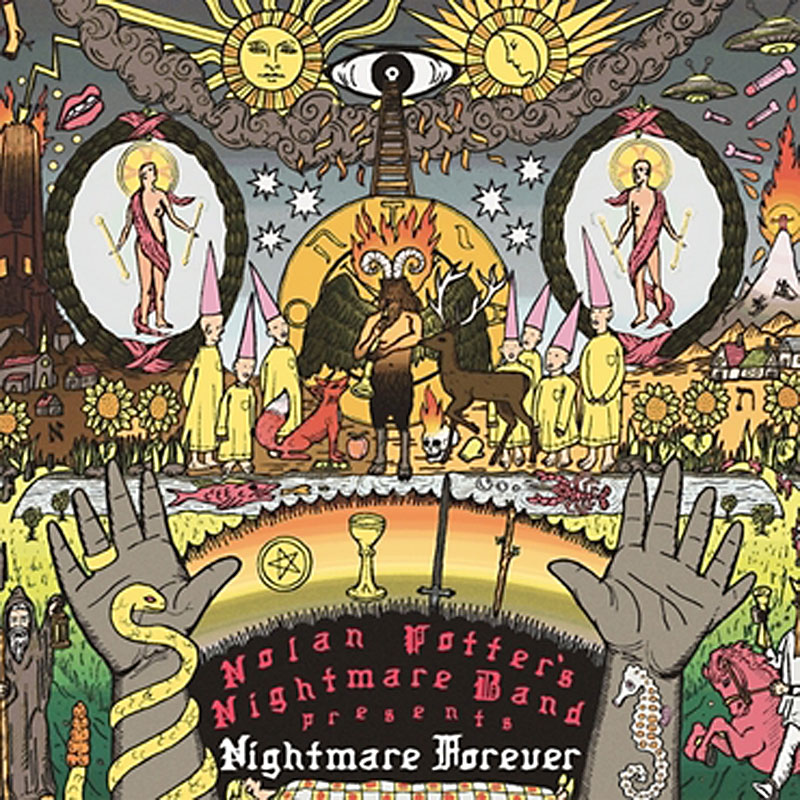 ‘Nightmare Forever’ is a vivid and colourful album of psychedelic rock from Nolan Potter’s Nightmare Band.

Any band can decide upon a wacky name, but once you’ve captured the attention of a potential listener you need to keep ‘em hooked with your music. If you’re going for bizarre, you’ve got to have the goods to back it up. This brings us to the fantastically named Nolan Potter’s Nightmare Band, who have just released their debut full length album, Nightmare Forever. The group hail from Austin, Texas and despite only releasing their first singles ‘Elf Curse’ and ‘Caberfae Peaks’ in the past year, it would seem the group have already picked up some traction, releasing their debut on John Dwyer’s Castle Face imprint.

This group appear to have a strong vision for their art, drenching their music in lore from the get-go to achieve an unhinged and admittedly nightmarish psychedelic image. This image is accurately mirrored in their sound, as from the very start of Nightmare Forever the listener is launched into a haunting landscape, reminiscent of early Black Sabbath and King Crimson. Wonderfully strange meets classic psych rock, with whimsical vocal melodies inspired by Syd Barrett-era Pink Floyd and fuzzy guitar riffs that hang on for dear life. The inclusion of tuned percussion and flute-driven melodies in and amongst the classic rock band instrumentation of guitar, bass and drums gives tracks like ‘Caberfae Peaks’ and ‘A Wizard Of The Wind’ a striking similarity to the early work of Frank Zappa and The Mothers of Invention.

However, the tendency psych rock bands have to focus on the mythical to portray psychedelia is somewhat overplayed in 2019; talking of elves and wizards may have been fresh and intriguing in the mid-late 1960s, but now induces a fair bit of cringe. This is not to say that NPNB only focus on fantasy topic material in their music, but there’s a fine line between a nod to the styles of the past and using these styles as an overbearing foundation to create your own music.

Overall, Nightmare Forever is a fitting debut for Nolan Potter’s Nightmare Band. The group have a clear artistic direction and a pool of classic psych rock from which to draw inspiration. Hopefully they will continue to develop their sound and mature into something wholly new, without losing their bizarre psychedelic roots, and it will be intriguing to see where they are headed next. With any luck, the nightmare will continue… (7/10) (Jacob Kendrew)

Listen to Nightmare Forever by Nolan Potter’s Nightmare Band here via Spotify, and tell us what you think below!