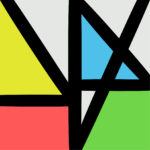 Okay, cards on the table time – I absolutely adore New Order. Having been introduced to their legendary former incarnation Joy Division as a moody, sniffy teenager, I discovered the music they made during their second life at around the same time as under-age drinking and clubbing. Suffice to say, with the help of their seminal compilation Substance, New Order changed my life and broadened my horizons. But quite aside from the music, theirs is possibly the most heartening underdog story in pop history. Having had to start all over again, rising from the devastated aftermath of Ian Curtis’ suicide, New Order rapidly developed into one of the most important groups of the 1980s. With deathless singles like ‘True Faith’ and ‘Blue Monday’ and epoch-defining albums such as Low-Life and Technique, they consistently demonstrated a totally natural affinity for the dancefloor, melding indie and electronics in a way that was years ahead of its time, and with Bernard Sumner’s shy, vulnerable and cryptic vocals rooting them in rock sensibilities.

However, subsequent years and decades have seen numerous splits, hiatuses and side-projects interspersed with infrequent bursts of recording. By 2007, and bassist Peter Hook’s acrimonious departure, New Order had become a saga, a brand trading on past glories instead of a working band. But although one of their iconic members had left, their 2011 reunion opened up the opportunity for real change. Guitarist Phil Cunningham kept his place; bass player Tom Chapman, who had worked with Sumner and Stephen Morris in their rather crappy side-project Bad Lieutenant, filled in for Hooky; and crucially, synth/keyboardist Gillian Gilbert came back in for the first time since 1998, meaning that New Order had both expanded their line-up and still had three of their original members despite Hook’s absence.

Of course, it’s great to see a first New Order album in ten years hit the shops, but at this stage in their career the question of whether Music Complete is any good is now inextricably bound up with the issue of the group’s legacy. Which is why it’s so immensely heartening to conclude that this album restores New Order’s relevance, a full 35 years into their career. It’s better than what even the most dedicated fan could reasonably have expected. This is no box-ticking exercise by a living museum piece – Music Complete bears the hallmarks of their glory days, the work of fully functioning artists with something to say rather than ones putting out music simply to tour the greatest hits.

Though 2001’s Get Ready remains an underrated, if qualified, success story, 2005’s Waiting For The Sirens’ Call was wildly patchy, to say nothing of the half-arsed offcuts ‘album’ Lost Sirens that appeared a few years back. Sumner and Hook’s autobiographies suggest that both of those records’ sounds were the result of a deal struck to keep their erstwhile bassist happy by leaning towards a guitar-oriented sound. Essentially, Hook’s departure seems to have freed up the group to return to its electronic heyday, something reflected in the use of graphic designer Peter Saville (who worked with the group and Factory Records right through the 1980s) to make the record’s sleeve, and this is the most welcome aspect of Music Complete. Indeed, there are very few songs that you can even imagine Hook playing on, but everything is still distinctively New Order-ish.

The album positively flies out of the traps with four impeccably observed dancefloor workouts, which find New Order in ruder health than could possibly be expected from a group on the verge of their 60s. Lead single ‘Restless’ uses a Bloc Party-esque template of fidgety rhythms and gentle synth washes that they can reasonably take credit for influencing in the first place. Sumner’s crooning voice is arguably fading slightly with time, but his vulnerable vocals are perfectly enshrined with the fluid, all-encompassing vibes of the music and don’t let the side down. As Music Complete wears on, New Order show a curatorial awareness in their selection of producers and guest vocals – Elly Jackson (i.e. La Roux), Brandon Flowers and Iggy Pop provide back-up in various places, and producers Stuart Price and The Chemical Brothers’ Tom Rowlands assist with a handful of individual tracks. Much more than a gimmick, it’s a masterstroke, placing them in a wider context of musicians they’ve influenced and who have inspired them.

Things get even better on the first Rowlands production ‘Singularity’, which sounds like Joy Division re-moulded into a festival banger. The Chemical Brother’s fingerprints are all over its electronic squawks and flourishes, and its pounding house feel suits them perfectly. This is followed by ‘Plastic’, an instant classic that could easily sit next to ‘True Faith’ or ‘Bizarre Love Triangle’ on Substance – its ecstatic, Moroder-esque engine forms the basis of a colourful yet bittersweet track of the sort they used to make in their sleep 30 years ago, as Sumner pleads with his quavering vocal “if you break me / will you fix me?” as Elly Jackson follows him on backing vocals. It’s an extraordinary piece of pop time travel, absolutely ageless and worth an extra mark out of 10 for the album purely on its own. This run continues with the deliciously trashy Eurodisco pump of ‘Tutti Frutti’ which again features Jackson.

The brilliance then dies down in the second third of the record, with more diverse styles coming through but with some consistency lost. The strange genre exercise of ‘People On The High Line’ features the kind of rubbery, funky ‘70s disco bassline that Peter Hook would never have played in a million years, and while it feels very un-New Order it’s nevertheless entertaining. ‘Stray Dog’, featuring Iggy Pop’s growling vocals, changes the mood entirely with something much darker – unfortunately, it’s rather too long, a fault that hinders a handful of tracks in the second half of Music Complete. The well-upholstered ‘Nothing But A Fool’ sounds like a song from Republic worked through properly, but really doesn’t need to last 7:40. ‘Academic’, again, is the kind of overfamiliar track that populated …Sirens’ Call and brings nothing new to the table.

However, just as Music Complete feels like it might sputter out, Tom Rowlands swoops in to produce ‘Unlearn This Hatred’, the shortest track on the album at 4:19 and characterised by perky, angular electronics that could see New Order appeal to the current generation of EDM-heads. The agreeable Pet Shop Boys-esque ‘The Game’ precedes the final track, the Brandon Flowers collaboration ‘Superheated’. Stuart Price’s shiny, glitterball production is tremendous, coming across as rockabilly pop reimagined with sequencers and synths, as Flowers gets to ditch his dressing-up-box schtick and sing with his spiritual zen master, in what one imagines is a career highlight for him.

Taking Music Complete as a whole, New Order work through their ideas and explore them fully, and on the good tracks this reflects a group with high levels of confidence, conscious of an artistic freedom that Hook’s departure has afforded them. On the lesser tracks, particularly in the second half of the record, it’s detrimental and disrupts the natural flow of the record. Its highlights are stunning – the first four tracks, in particular, are the strongest run of back-to-back recordings New Order has made in more than a quarter of a century – but the overall product is slightly imperfect, making Music Complete a rather apt microcosm of everything New Order’s fans love about the band rolled into an hour and four minutes. If it does turn out to be their last ever album, it’s a satisfying full stop to their hugely important legacy. (7/10)