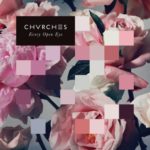 Front cover of ‘Every Open Eye’

Scottish trio Chvrches deservedly spent most of last year on a triumphant tour soaking up the adulation directed at their scintillating 2013 debut album The Bones Of What You Believe. Highly melodic and sharply produced, it was poised perfectly between genres – too pop to be indie, too indie to be pop – but that didn’t stop the band from reaching a wide audience ranging from the blogosphere to dancefloors, seizing the zeitgeist and making them one of the most imitated bands of the last couple of years. Every Open Eye follows in relatively short order, and sees the group once again embrace of the joys of economy in modern pop, but this time their delivery is much more relaxed and self-assured.

“It sounds to me like we have a more assured idea of what the band is, having lived in it for two years,” lead singer Lauren Mayberry said in the run-up to this release, and that’s a perfect encapsulation of the subtle shift on display. Their debut felt like an all-or-nothing attempt to pull out all the stops, to impress themselves forcefully on the listener’s conscience: now they’re established, intrigue is the order of the day on Every Open Eye, that they’re keeping something back from the listener – out of choice, not because of any lack of ideas that can sometimes sink sophomore efforts. The way that Iain Cook and Martin Doherty make their productions play second fiddle to Mayberry’s voice on opener ‘Never Ending Circles’, with squiggles and flourishes of effects and the band’s trademark chopped-up backing vox, sets the tone nicely.

Lead single ‘Leave A Trace’ comes across like a torch ballad crossed with moody trip-hop, and sees Chvrches dip a toe into darker waters but still sticks to their successful formula of feeling like two different songs resolved into one. It was, of course, the video for this track that caused Mayberry to take to Channel 4 to call out the misogynist trolls that left abusive comments all over its message board, and the track itself seems to be an assertive statement of independence. Either way, it’s a fine moment. However, on a couple of occasions their sense of restraint doesn’t service the song. Doherty’s star turn on ‘High Enough To Carry You Over’ is a mid-album lull, while the soft edges of the overly-long ‘Down Side Of Me’ make it inessential, even though it’s an attempt for the group to show a new side of themselves.

However, fans of the first will be glad to hear that Chvrches haven’t lost their knack for a bloody great tune. New single ‘Clearest Blue’ may as well be Depeche Mode – the early Vince Clarke incarnation, to avoid confusion! – with its bulletproof armour of synth and basic 2/2 thump. As its chorus-free structure unwinds slowly, Cook and Doherty build the tension and play with the listener’s perceptions – until the almighty drop in its second half. It’ll be a festival highlight in 2016, mark our words. ‘Keep You On My Side’ uses a Moroder-esque synth sequence; the cool, ‘80s drum pads of ‘Empty Threat’ and the toothy electronic riff of ‘Bury It’ are both very immediate moments ripe for playlists.

Once again, even more impressive than the bright, inventive production from Doherty and Cook, it’s Mayberry’s voice that is the star attraction. Clear, well-enunciated and evocative, she’s capable of huge empathy and feeling despite a limited vocal range. Here, she is very much the centre of attention, whereas before it often sounded like it was ‘first among equals’, another instrument to mesh with the arrangements. When she roars out “we will take the best parts of ourselves and make them gold,” on the resplendent ‘Make Them Gold’, it feels like a mission statement – to make accessible yet intelligent and sensitive chart-bound pop. Every Open Eye, for the most part, succeeds admirably. (7/10)

Listen to Every Open Eye here!